Charles R. Drew University has embarked on one of the most historic and ambitious projects ever attempted in South Los Angeles: the development of a four-year, fully accredited independent medical school dedicated to eradicating local health care disparities. The effort will build on the original McCone Commission Report published in the aftermath of the 1965 Watts Rebellion that called for an aggressive, proactive approach to providing the highest level of local resident health care.

Completion of the project, identified as the CDU Independent Medical Education Program (IMEP), will fulfill the hopes and dreams of many people who lobbied and attempted to persuade decision-makers for decades. From the pioneering physicians of the Charles R. Drew Society to beloved community activists such as Mary Henry, Lillian Mobley, and Ted Watkins, many committed people helped lay the groundwork for the University’s mission and vision.

Since its rebirth as a top-tier medical training program under the leadership of President/CEO Dr. David Carlisle, the University has compiled a very impressive track record. CDU’s Graduate Medical Education programs have continuously achieved high honors in accreditation renewal. Its program initiatives, under the heading The CDU Advantage, are nationally recognized.

Even prior to the onset of the novel coronavirus pandemic, the need for such a dedicated medical education program was overwhelming. This occurrence of this mysterious virus, with all of its attendant dangers and complications, only heightens the demand to offer a full range menu of protective services to vulnerable people as soon as possible.

The opportunity for this region to be a major training center for young physicians is an innovative game changer. Clients endure many health challenges that often go unmet because there has not been an adequate supply of professionals trained and equipped to meet their needs. According to the 2017 needs assessment commissioned by Martin Luther King Community Hospital, there is a shortage in excess of 1,200 physicians in SPA 6 where the Hospital and the University are located.

Beginning in 2018, Family Medicine and Psychiatry, two new residency programs operated in partnership with the County of Los Angeles, have become high demand stops for newly credentialed physicians seeking experience treating vulnerable populations. That success has served as a gateway for establishing two additional residencies, Internal Medicine and Surgery, over the next two years while the IMEP is completed.

According to Dr. Kelsey Martin, dean of the UCLA/David Geffen School of Medicine, “There’s clearly a need for more physicians in Los Angeles, as well as California, and beyond. I believe that the independent medical education program at Charles R. Drew University has the potential to contribute positively to solving that need,” she noted.

Dr. Deborah Prothrow-Stith, dean of the College of Medicine, is the senior administrator charged with day-to-day project management. Her core team of staff and consultants continually deliberate on myriad elements including the institutional response to the Liaison Committee for Medical Education (LCME) self-study requirements that are essential to pushing the project forward. The LCME is a national entity that approves an applicant institution’s operational capacity and ability to manage and operate such a program.

Since 1978, CDU has operated a concurrent medical degree-granting program with the UCLA/David Geffen Medical School. The fifth ten-year agreement between the universities was signed in 2018, thus ensuring the continued future of the joint Medical Education Program alongside the new IMEP.

The CDU IMEP has the full backing of the University Board of Trustees, the governing body of stakeholders who represent a wide variety of interests within the medical profession; and community leaders who hold prime decision-making roles. Most notably, outgoing 2nd District County Supervisor Mark Ridley-Thomas has championed numerous CDU initiatives throughout his tenure. 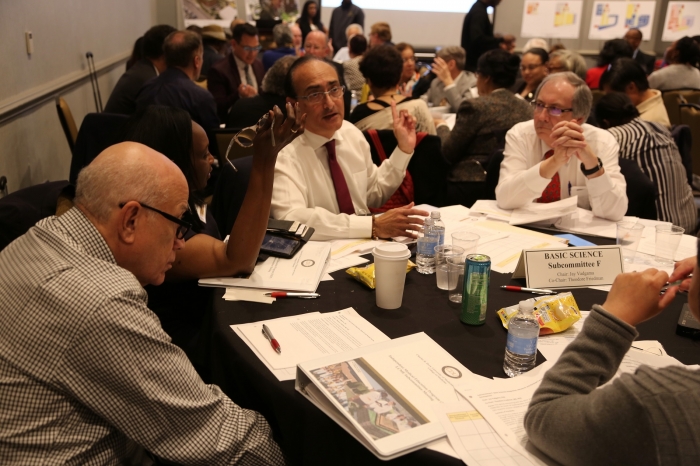 President Carlisle and Provost Dr. Steven Michael have ensured that senior CDU administrators are fully involved in IMEP project implementation. Faculty leaders and residents with close ties to the university are likewise engaged and energized. The timing for this project is opportune.

Fulfilling the requirements laid out in the LCME guidelines is essential to greenlighting the project long term. Currently, there is an eighteen-month window for institutional self-study. The formal LCME review is intensive, granular, and entails hard scrutiny of a variety of important details.

The self-study is completed with the input of the LCME subcommittees. Comprising key CDU faculty members and staff, these teams compile information and then plan every phase of developing the IMEP from mission and vision to curriculum, faculty development, and identifying and securing the funding for project execution and sustainability.

Tripp Umbach, a nationally recognized medical school development consultant team skilled in feasibility and economic impact studies, has been advising the College of Medicine for four years on the IMEP. Architectural design consultant SLAM, with experience building state of the art medical school facilities across the country, has created a variety of renderings that put a visual face on the facility to be erected. CDU recently hired Brakeley Briscoe, a 100-year old project management and fundraising firm, to consult on the IMEP capital campaign.

The project scale is momentous. The building is projected at 100,000 square feet, with an ambitious $100 million targeted fundraising goal. The IMEP will be housed on the university campus. The project was kicked off with nearly $2 million in planning grants from the Cedars-Sinai Foundation and the California Endowment. Key relationships with the County of Los Angeles, private sector donors, foundations, the National Institutes of Health, and state and local funders, will spur the effort.

Dean Prothrow-Stith summed up the prevailing sentiment on campus. “We are working enthusiastically, and hard, to add the Independent Medical Education Program to accept a class of 60 students to matriculate in 2023. The University and COM are in full gear. What an exciting time!”

Added UCLA’s Dr. Martin: “I’m certain that all of the medical schools in the region, like us, will be rooting for this program to be successful and will be helpful. We all share a mission of really improving our community and we all need to work together and support each other.”