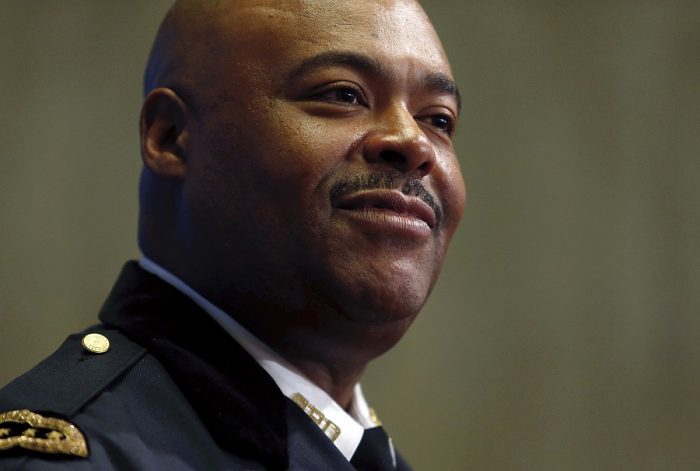 In this July 23, 2018 photo, newly appointed Boston Police Commissioner William Gross speaks at City Hall after he was introduced to succeed William Evans. Gross will be sworn in as the city’s first African American police commissioner on Monday, Aug. 6. (Jessica Rinaldi/The Boston Globe via AP)

William Gross arrived in Boston in 1975 amid clashes over court-ordered desegregation of the city’s public schools. More than four decades later, he is taking the reins as the first Black police commissioner in a city that in some ways is still struggling to overcome a reputation for racism.

Black leaders say they hope Gross will prioritize building a more diverse police force and providing closure for families of homicide victims in communities of color to strengthen trust in law enforcement.

“We’re at a pivotal time where the issue of race and racial animus and the disparities between people of color and Caucasians is front and center,” said Rev. Jeffrey Brown, an anti-violence advocate and pastor in the Roxbury neighborhood. “The city is looking to move forward in making sure the Boston Police Department is not only representative of the people, but serves effectively the entire city, not just parts of the city,” Brown said.

Gross, 56, moved to Boston from a farm community in Maryland at age 12 as the forced busing of students to desegregate schools sparked violent unrest and trained the nation’s eyes on the city. At the time, police and communities of color were adversaries, and Gross has said his friends thought he was crazy for wanting to be a cop.

Despite that, he joined the force in 1985 and worked his way up from a patrol officer to the department’s first Black superintendent-in-chief in 2014.

“I didn’t even know if Boston was ready for an African-American chief, but I knew that Boston was moving in the directions that would distance it from its horrid past of racism and exclusion,” Gross said in an interview with WFXT-TV in February.

Gross will be sworn in Monday at the Morning Star Baptist Church. He replaces William Evans, who is leaving for a job at Boston College.

Under Evans, Boston police were recognized by the White House for their efforts to build relationships through neighborhood walks and other initiatives. Officials say they believe those efforts helped ward off the violent clashes that have occurred in other cities between residents and police. 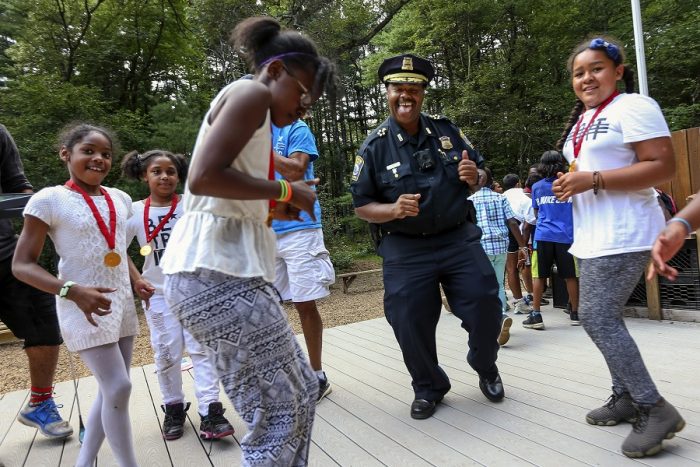 In this Aug. 25, 2017 photo, Boston Police Superintendent-In-Chief William Gross, second from right, joins campers in the first-ever “Dance with a Cop” competition at YMCA Camp Ponkapoag in Milton, Mass. Gross will be sworn in as Boston’s first African American police commissioner on Monday, Aug. 6, 2018. (Nicolaus Czarnecki/Boston Herald via AP)

At the same time, activists remain frustrated by the dearth of diversity in the department and the number of killings that have gone unsolved in Black communities.

Boston has the largest disparity among major U.S. cities in arrest rates in cases when the victim is White versus Black, The Washington Post reported last month. More than 250 out of 435 killings of Black victims since 2007 remain unsolved, compared with just six of 57 killings of White victims, the newspaper reported.

Some Black leaders say they believe Gross’ own experiences with racism and his upbringing in what has been described as a tough neighborhood will shape his approach as commissioner and help strengthen relations between minority communities and police. Gross has spoken about being called slurs and an Uncle Tom, and having to get past his own stereotypes about White officers as a young officer.

“He understands why people have being protesting and what Black Lives Matter really means,” said Segun Idowu, an activist who pushed for Boston police to wear body cameras and is running for state representative.

Jamarhl Crawford, an activist and editor of the website the Blackstonian, said he believes Gross was picked primarily as an effort to appease the city’s Black community and expressed frustration that the public wasn’t involved in the selection process.

Gross will face impossible demands to address all the department’s and city’s racial issues, said Larry Ellison, a Boston police detective who started as a cadet with Gross.

“It’s unfair to put unreasonable expectations on him because he’s first and say all of a sudden he has a magic wand and is going to fix everything,” said Ellison, president of the minority officers union. “Race is a problem here. But it’s not just his problem to deal with.”