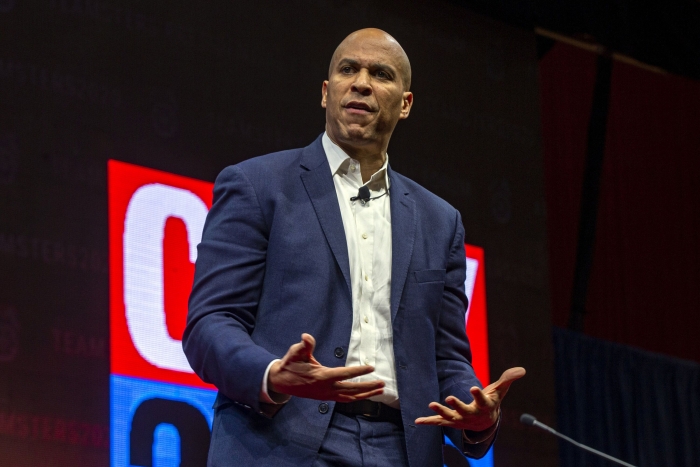 Fighting to be in the next Democratic presidential debate, Cory Booker concluded a nearly 800-mile, 12-county tour of Iowa on Sunday by criticizing the Democratic party for allowing “elites” and “money” to control who gets on stage and urging voters to offer his name when pollsters call.

“Iowa never lets elites decide,”he told a crowd at his campaign office in Cedar Rapids on Sunday. “Let’s let Iowa have another comeback story.” Just six candidates are qualified for the Dec. 19 debate, and Booker is not one of them. He’s met the threshold of donors required to qualify but he has yet to hit the polling qualifications _ either 4 percent support in at least four polls or 6 percent support in two early-state polls. The deadline is Thursday, and he’s yet to hit the mark on a single poll. Booker said such measurements benefit candidates who can afford to air television ads and do not reflect the feelings of Iowa voters. Over his four-day trip, Booker frequently received standing ovations at events ranging from town halls to forums with Teamsters union members and farmers. He brought several voters close to tears, shared corny jokes and gleefully posed for photos with voters, sometimes alongside his girlfriend, actress Rosario Dawson.

“I’m a little upset with the (Democratic National Committee) right now because they seem to be trying to make the decisions for you,” he told a Sunday afternoon crowd gathered in a Dubuque bar.

Xochitl Hinojosa, a spokeswoman for the DNC, called the party’s debate rules “inclusive “and said no candidate who has gone on to be the party’s nominee has polled lower than 4 percent at this point in past primaries.

“While we are legally required to have objective criteria for each debate, our qualifying criteria has stayed extremely low throughout this entire process,” she said in an emailed statement. “We’ve never seen a political party take this many steps to be inclusive.”

As Booker seeks momentum, he’s sharing a message focused far more on emotion and values than on policy and purity tests. He said his policy chops compare to any of his rivals, but it will take a leader who can help Americans see and care for each other to make progress on thorny issues like gun control and climate change.

“He just moves you; he wants you to rise to a higher calling and I think we all need that,” Meyer, 63, said. It was her second time seeing Booker speak. She hopes to see him on the December debate stage, but she also likes Massachusetts Sen. Elizabeth Warren and South Bend, Ind., Mayor Pete Buttigieg.

Sunil Malapati, a 47-year-old college chemistry teacher, said he was leaning toward caucusing for Booker but Sunday’s event “more or less sealed the deal.”

“There’s a certain authenticity you can’t fake,” he said.

Booker has just four more days to see enthusiasm reflected in the polls. If he’s not on stage, he has committed to campaigning in Iowa that day.

Warren, Buttigieg, former Vice President Joe Biden, Sens. Bernie Sanders and Amy Klobuchar, and businessman Tom Steyer will also be onstage. It could be the party’s first debate of the presidential cycle featuring all white candidates.