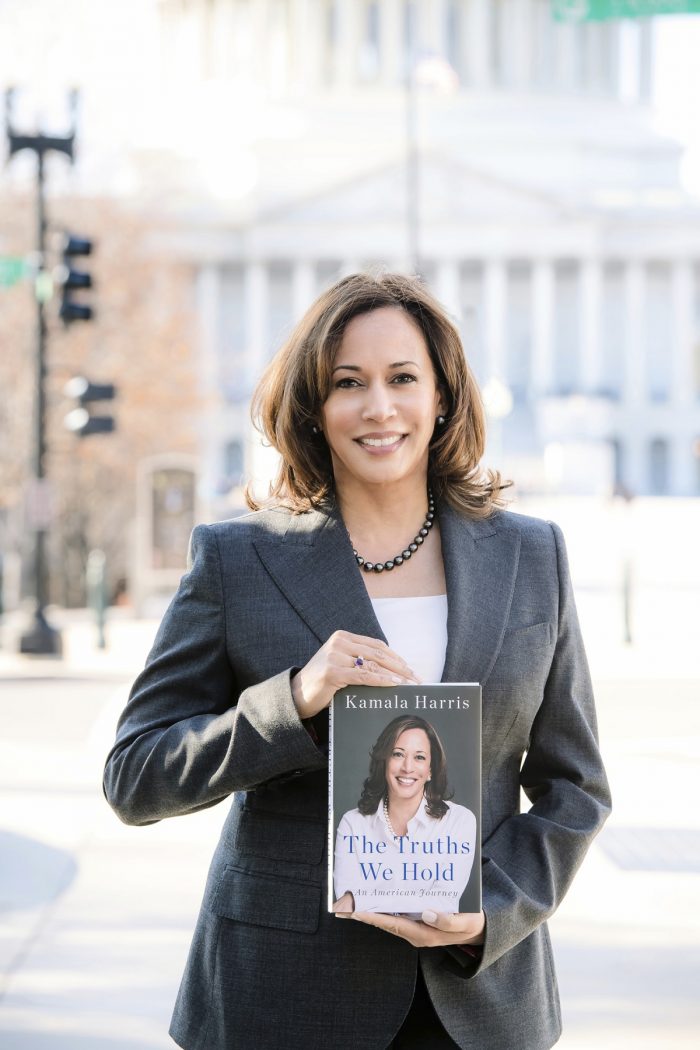 “We’ve seen … [the Trump] administration align itself with white supremacists at home and cozy up to dictators abroad; rip babies from their mothers’ arms in grotesque violation of their human rights; give corporations and the wealthy huge tax cuts; derail our fight against climate change; sabotage health care and imperil a woman’s right to control her own body; all while lashing out at … the very idea of a free and independent press.

Americans know we’re better than this but we’re going to have to fight for it. This book grows out of that call to action and out of my belief that our fight must begin and end with speaking [the] truth … that racism, sexism, homophobia, transphobia and anti-Semitism are real in this country, and we need to confront those forces,” excerpted from the book’s Preface (pages xiv-xv).

Kamala Harris has officially thrown her hat in the ring for the 2020 Democratic presidential nomination, launching her campaign with a spirited rally in her hometown of Oakland, attended by over 20,000 enthusiastic supporters. The first term senator from California’s bid is reminiscent of Barack Obama’s POTUS bid, in that she too is racially mixed and has conveniently published a very timely autobiography, which also lays out her political platform.

In it, we learn that Kamala’s father, Donald, was from Jamaica and taught economics at Stanford, and her mother, Shyamala, a cancer researcher, was born in India. The book is very engaging and reads like she actually wrote it herself, unlike most celebrity bios nowadays.

She reflects fondly on a culturally rich childhood growing up in the Bay Area until the age of 12, when her mother took a job in French-speaking Montreal. In high school, Kamala developed an interest in becoming an attorney, and decided to attend Howard University (where she would join the debate team and pledge AKA sorority) because it was the alma mater of her hero, Thurgood Marshall.

After graduation, she returned to Oakland to study law at UC Hastings before kickstarting her legal career. She enjoyed a meteoric rise from assistant prosecutor to San Francisco District Attorney, to California Attorney General, to U.S. Senator.

Because she spent so much time representing the state in criminal cases, Kamala positions herself here as a political progressive, ostensibly to convince skeptics of the criticisms she now levels at the justice system as racist. Overall, I’d say this opus serves as a persuasive introduction to a charismatic candidate likely to be in the U.S. presidential race for the long haul.