Prior to former Assemblyman Sebastian Ridley-Thomas’ resignation in December 2017, he spent the past four years serving the South Los Angeles community by taking on the state’s homelessness crisis, mental health and environmental issues. Although he is no longer serving in the assembly, Ridley-Thomas continues to be a voice and face of the community. This time however, he is taking his voice to the polls by encouraging California residents to register to vote!

The African American Voter Registration, Education and Participation Project (AAVREP) is known as one of the most influential and effective voter registration efforts in California. AAVREP was founded 16 years ago by Supervisor Mark Ridley-Thomas. Now with Sebastian Ridley-Thomas as the projects chief strategist, AAVREP will continue its legacy of voter empowerment through the electoral process.

“Over the past 16 years, we as an organization have registered over 230,000 people according to the L.A. County Registrar-Recorder and California Secretary of State. We really just seek to build on that legacy of delivering on political empowerment for African Americans,” said Ridley-Thomas.

“This is a critical time, African Americans are going to be pivotal to any number of elections. We think it is important that the ‘WokeVote18’ be a part of that.”

AAVREP stands on the belief that mobilizing Black people to vote will allow them to assist the government in addressing topics that are vital to people of color like access to health care, housing, and constitutional policing.

WokeVote18 primarily focuses on Black voter registration however, AAVREP has and will continue to register voters of other ethnicities.

To help with the launch of WokeVote18, AAVREP has partnered with community organizations to conduct focus groups and polling of African American voters in state and local elections. 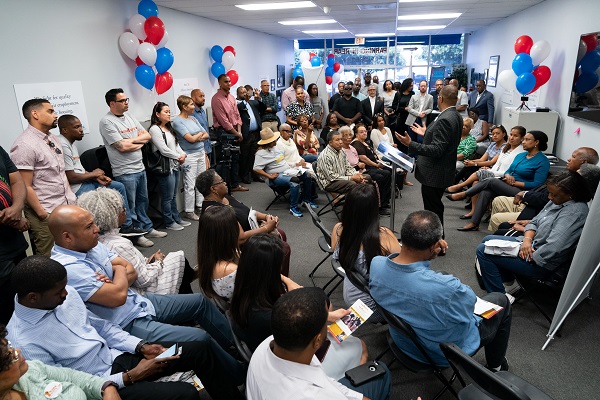 “Black votes will be the margin of victory or the margin of despair and it’s my observation that the Black vote is often discounted. But we are really the ones that might shape what it means to protect democracy, improve equity, and eliminate disparity,” said Ridley-Thomas.

“Whether it be an educational outcome for Black children, maternal health for Black women and internal health for infants, employment opportunity in a robust economy, where we still don’t see as much equity as we would hope for all African Americans and working people. Our votes are going to deliver on the promise of inclusion, democracy, and justice.”

WokeVote18 is located at AAVREP Headquarters 3653 S. La Brea Ave LA, CA 90016 near the intersection of Rodeo Road and La Brea Avenue in the Crenshaw District. For more information on the voter registration drive or to participate, visit www.aavrep.org, or call 323-903-5542.