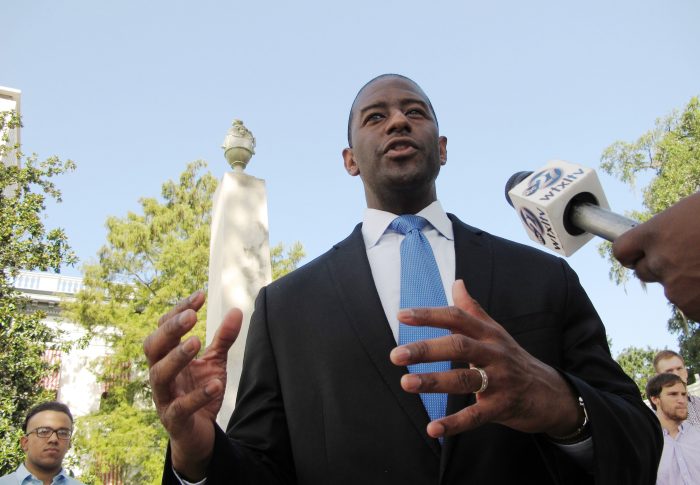 Tallahassee Mayor and Democratic candidate for governor Andrew Gillum stands in front of a Confederate monument on the Florida Capitol grounds and calls for its removal Saturday, Aug. 19, 2017 in Tallahassee, Fla. (AP Photo/Brendan Farrington)

The black mayor of Florida’s capital city stood in front of a 135-year-old Confederate monument in front of the state Capitol Saturday and said the events in Charlottesville, Virginia, now make it a priority to remove Confederate symbols like the ones he walked past every day of his life.

The monument Democratic gubernatorial candidate and Mayor Andrew Gillum targeted has been on the grounds of Florida’s Capitol since 1882 in honor of local Confederate soldiers who died in the Civil War.

“I was probably one of those folks who would walk past a Confederate flag or walk past a monument like this for years,” he said. “We’ve had to suppress our emotions and feelings around what these kind of symbols cause, what they’re intended to stir up, what they’re intended to do _ most directly for people of color, to put us in our place in society.”

His remarks came a week after a rally by white supremacists and neo-Nazis in Charlottesville that was ostensibly to protest a proposal to remove a statue of Confederate Gen. Robert E. Lee. A woman who was part of a counter-protest was killed when a car slammed into a crowd. Two state troopers also died in a helicopter crash.

“We have folks who are dead because of monuments just like this and what they have evoked in the spirit of neo-Nazis and racists,” Gillum said.

But for Gillum, it’s more personal.

By comparison, leading Republican candidate Adam Putnam is a Florida Cabinet member whose office is also on the Capitol grounds, and he was unaware that the monument existed until this week. Putnam’s family has been in Florida since before the Civil War and he’s said that people shouldn’t fight about Confederate symbols.

“He has the luxury of not knowing, not even caring about what these symbols evoke in the spirit and the mind and the memories of so many Floridians,” Gillum said. “There’s a huge segment of the population of this state who find monuments like this, and the Confederate flag and the vestiges of slavery to be deeply painful.”

And while Putnam had to be told the monument was on Capitol grounds, Gillum said he’s been aware of it since he was a student at historically black Florida A&M University. He said he saw it when he participated in a march to protest then Gov. Jeb Bush’s plan to strip affirmative action in state college admissions and contracting.