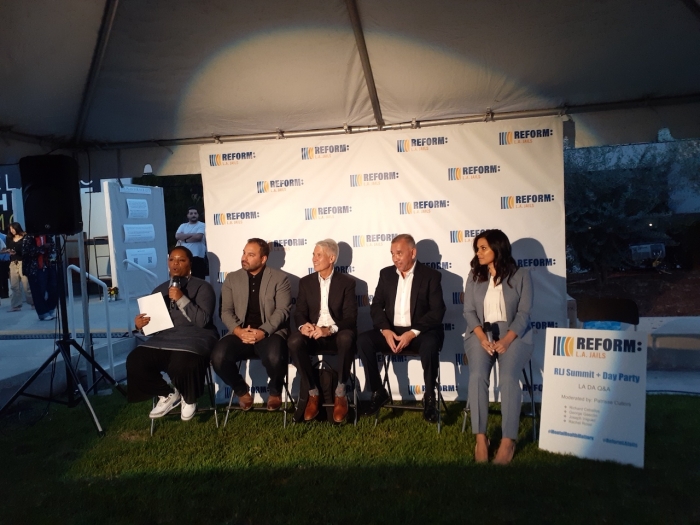 Black Lives Matter founder and activist Patrice Cullors is joined by a panel of L.A. County District Attorney candidates to discuss the importance of diverting the mentally ill from jails to resources November 9, 2019 in Pasadena. (photo Jennifer Bihm)

Activist, public speaker, co-founder of Black Lives Matter Global Network and Chair of Reform L.A. Jails Patrisse Cullors, joined by four candidates for L.A. County District Attorney, held a panel in Pasadena Saturday, November 9 aimed at raising awareness around mass incarceration and mental illness. During the festive evening event, the panelists/ candidates talked about the importance of redirecting the mentally ill from jail to treatment. Their mission statement has been summed up in the social media hashtags: #REFORMLAJAILS #CARENOTCAGES #CARINGISEASY.

“L.A. County’s jail system is the biggest in the world and has a history of over-jailing the mentally ill,” said a spokesperson for the campaign.

“Right now, there are 5,000 Angelenos in L.A. County Jails simply because they suffer from mental illness. 65% of prisoners are not receiving the mental health care and addiction support that they need. If RLJ is successful, our ballot measure will require L.A. County to invest in rehabilitation and mental health treatment.”

The campaign has a goal of contacting nearly 300,000 voters in L.A. County before election day, said campaign officials.

“L.A. County has a history of dealing with mentally ill people by incarcerating them,” said D.A. candidate Richard Cabellos.

“That is not the answer. Incarcerating people doesn’t make them better, it makes them worse. We have to change the mentality. We need to sit side by side with social workers and say, ‘hey, this [mentally ill] person doesn’t deserve to go to jail, let’s get him into a program…”

According to a report released by California Health Policy Strategies in January of 2018:

“We know the data is staggering and it’s not okay,” said D.A. candidate Rachel Rossi.

“I come to this with a different perspective from having had to sit next to those people who are churned in and out of the criminal justice system on a daily basis. If I’m elected as district attorney I would first expand access to diversion programs that already exist. There are programs that exist to provide treatment instead of jail but there are low acceptance rates into those programs.

“What we need to do is expand the D.A’s recommendations for people to get into those programs and expand their capacity.”

Rossi said she would also start looking into how to prevent mentally ill patients from entering into the criminal justice system in the first place.  Event organizer Cullors herself,  began the movement in response to the violence her mentally ill brother suffered at the hands of law enforcement.

“He was diagnosed with schizoaffective and bipolar disorders while in jail — and he struck a deputy in the face when he was being transported after a psychiatric evaluation. Four or five more deputies showed up, Monte says, and he got a beating. (According to the deputies’ account in court records, Monte attacked one deputy and lunged at another who came to the first one’s aid.)” 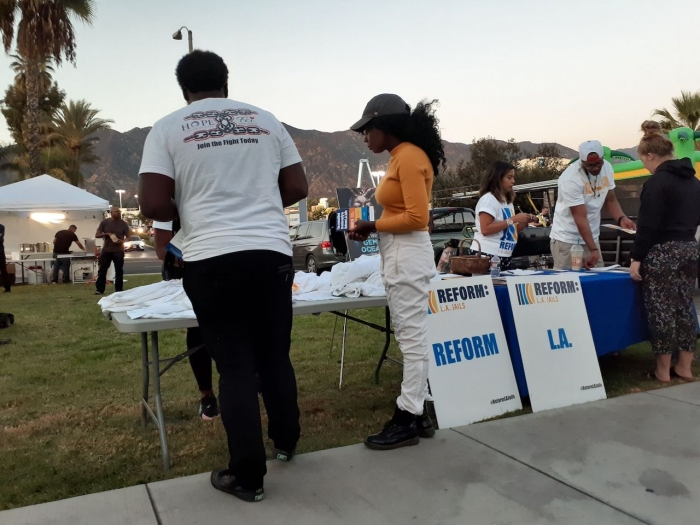 Cullors said her brother was ultimately convicted of battery on an officer in addition to an  original charge of evading police, and sentenced to 40 months in state prison.

“There are currently 17,000 people in our county jail,” Cabellos said.

“5300 of them, almost a third, are people who have mental issues. Those people don’t need to be in jail. They need to be in a community based program to help them. L.A. County Jail is the largest mental health facility in the county. That’s not right.”

Like Cullors, D.A. candidate George Gascon has a more personal reason for his fight.

“I have a brother who, for the past two years has been teetering on mental illness,” Gascon explained to the crowd Saturday night.

“My family and I have been trying to help him out and he’s rejected our help. And, one of the things I really dread is getting that call in the middle of the night from my mother or someone else in my family that he’s been killed. I know deep down that my brother is a good guy but right now he’s struggling.