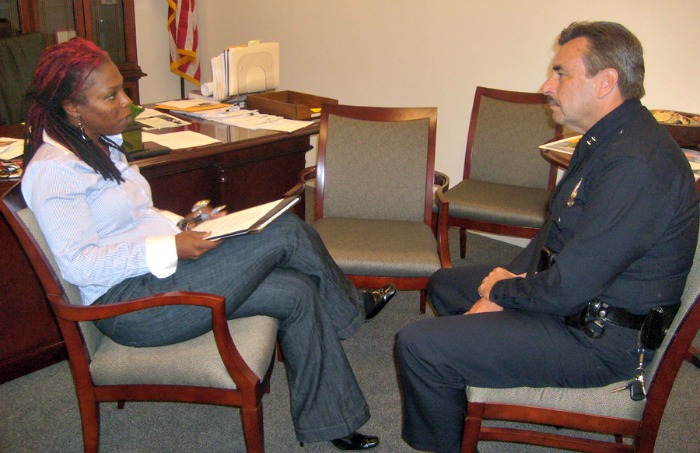 The lawsuit alleges that on the evening of Nov. 19, 2014, Cannick was detained, handcuffed and arrested while covering a protest march against police brutality in downtown Los Angeles. This after the LAPD blocked a group of over 100 people she was following. While other reporters were allowed to leave after identifying themselves as journalists, the LAPD did not allow Cannick to leave subsequently arresting her.

At the time of Cannick’s arrest Los Angeles Police Chief Charlie Beck was in the immediate area. Cannick, who in recent years had become more and more critical of Beck’s leadership of the LAPD, believes that he purposely allowed her to be unlawfully arrested and detained due to his displeasure about her articles criticizing his leadership.

The lawsuit says that following her release from jail, criminal charges were filed against Cannick based on a fabricated police report that claimed she was at the front of the protest group leading protesters to cross a skirmish line of LAPD officers.

Almost a year later and after numerous court appearances where the LAPD and City Attorney’s office could not furnish any proof to substantiate their claims, the case was suddenly dropped on the day her trial was expected to start.

Well known civil rights attorney Nana Gyamfi said, “Chief Beck, and the LAPD command staff present with him when the LAPD arrested Cannick, knew that she was a journalist, and they intentionally arrested her to teach the lessons that corruption and malfeasance in Charlie Beck’s LAPD are not to be exposed, and that journalists who routinely expose them are subject to false arrest and imprisonment.”

Retired Los Angeles deputy city attorney, now private attorney Robert Brown added, “ Cannick’s false arrest, imprisonment, and prosecution should send a chill down the spine of every person who believes in a free press that can challenge the truthfulness and honor of law enforcement, especially when considering an agency like the LAPD which makes loud and boastful claims of transparency and integrity.”

Cannick has won numerous awards for her body of work and is a frequent guest on “CNN” and “NewsOne Now” with Roland Martin. Her articles, op-eds and commentary have been featured in African-American newspapers from coast-to-coast including the award-winning Los Angeles Sentinel, L.A. Watts Times and Ebony Magazine. She’s also written for the Los Angeles Times and Los Angeles Daily News among others.