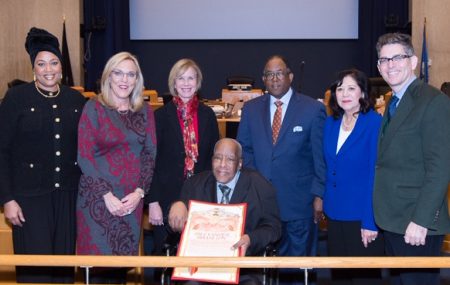 “I commend you for a long-lasting and outstanding career in the music industry, and for all that you have done and continue to do in the lives of musical artists all over the world,” Supervisor Ridley-Thomas said.

In accepting the honor, Dr. Hamilton said, “As long as God gives me a finger to play with and a mind to think with, he’s got me and I’ll be making His music as much as I can.” He was joined by his wife, Lady Alicia Hamilton, as well as several friends and choir members. He said he has made a lifetime of conducting God’s music through them. 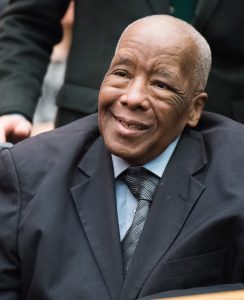 On the big screen, Dr. Hamilton can be seen directing the choir in “Amazing Grace,” which documented the recording of the Queen of Soul’s 1972 platinum selling album. The film’s producer, Alan Elliott, said of Dr. Hamilton: “His work is a monument to himself, to God, to the community of Los Angeles, and to the world.”

On February 7-18, “Amazing Grace” will kick off the 27th Annual Pan African Film Festival at the Baldwin Hills Crenshaw Plaza. Supervisor Ridley-Thomas encouraged everyone to see it, saying, “It is a musical experience that takes you to a different level.”

Dr. Hamilton began his career at the tender age of nine-years-old. As a child, he was a student of the late Hall Johnson, a well-known musical writer and arranger.

For 45 years, Dr. Hamilton served as the director of The Voices of Inspiration community choir, The New Generation Singers, and the Immanuel Gospel Community Choir. Dr. Hamilton and The Voices of Inspiration Choir have recorded several albums, including Glory, Hallelujah!, God Can, and Praise Him Till. Under his direction, The New Generation Singers recorded and released an album entitled Safe in God’s Love.

Currently, Dr. Hamilton is the Pastor of Philadelphia Church Fellowship of Los Angeles.