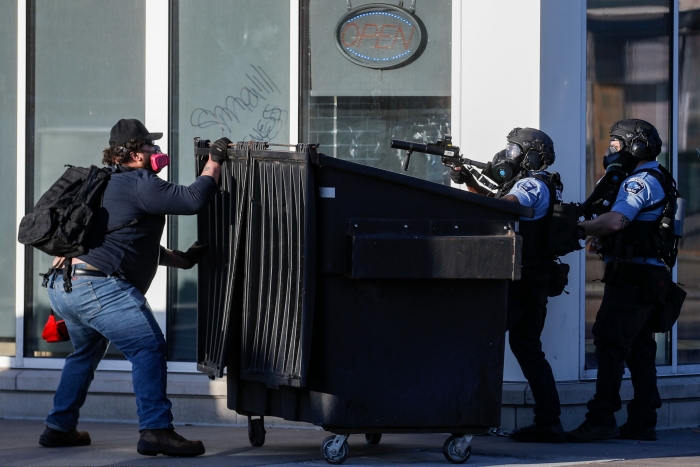 A protestor faces off with two police officers using less-lethal ammunition in their weapons, Thursday, May 28, 2020, in St. Paul, Minn. Protests over the death of George Floyd, a black man who died in police custody Monday, broke out in Minneapolis for a third straight night. (AP Photo/John Minchillo)

Imprisoned comedian Bill Cosby has spoken out the police murder of George Floyd, a handcuffed African American man who died a short time after police officers were filmed pressing their knees into his neck and body for nearly nine minutes.

In a statement released by his publicist Andrew Wyatt, Cosby cited the continued police killings of African Americans and the racially-motivated slayings of Black people, including his son, Ennis.

“When I think about George Floyd, Breonna Taylor, Ahmaud Arbery and countless other Black people murdered by Racial Hatred, I could not help but think about my son, Ennis, who was also brutally murdered,” stated Cosby, who is serving a three-to-ten-year prison term after his 2018 conviction on charges of indecent aggravated assault.

Cosby has maintained his innocence and is hoping that a state Supreme Court review of his case will result in a new trial. Despite Pennsylvania Governor Tom Wolf’s executive order in April that allowed many seniors and those with pre-existing conditions released on house arrest, Cosby remains jailed.

The “I-Spy” and “Cosby Show” legend also railed against authorities whom he said has disrupted peaceful protesters.

“Yes, protests are meaningful and powerful when they are done in a peaceful manner. But, the Mayors and Governors of Minneapolis, Philadelphia, New York, Los Angeles, Atlanta, Birmingham, (and other cities) can’t send police officers out in tactical gear, ready and willing to inflict bodily harm, which doesn’t reflect peace nor the expectation of a peaceful protest,” Cosby offered.

“Come On People! Let’s not squander a golden opportunity — officers – remove your tactical gear, remove your guns, put on the Full Armor of GOD, and march with the people whom you have made your enemy. I will continue to pray that GOD provides the families of George Floyd, Breonna Taylor, Ahmaud Arbery, and countless other Black people murdered by Racial Hatred with wisdom, understanding, and peace during these difficult times. Please be mindful and be safe.”