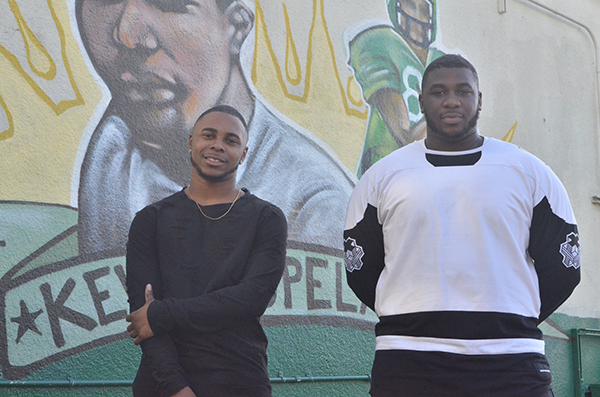 Dorsey seniors Gregory Jordan jr. and Antwone Williams earned a chance to pursue football on the Division l college level. Both players will be competing in the Big Sky conference with Jordan signing with Northern Arizona University and Williams committing to Portland state.

Jordan is a defensive tackle for Dorsey High School. He noted how coaches from NAU contacted him on Twitter, telling Jordan that his film impressed them.

“I liked the program, how it was run, coach (Jerome) Souers, the head coach, is a great coach and a nice man,” Jordan said.

Jordan had been playing varsity since his sophomore year. Prior to enrolling in high school, he played for the Baldwin Hills Bruins youth football league, which practiced at Rancho Cienega Park, in South L.A.

“I always seen Dorsey walk from [campus] to the (Jackie Robinson) stadium every time,” Jordan said. “It was just nice and I was young so I was pumped up.”

During the 2016 season, Jordan accumulated stats on both sides of the ball with 26 rushing yards, one rushing touchdown and 1.5 sacks, according to Maxpreps.

Jordan can aide NAU’s defense, while Portland State will benefit from running back Williams’ offensive abilities.

Portland State running backs coach Nick Whitworth had visited Williams at Dorsey to talk to him about the university.

“He just told me that it was a good place,” Williams said. “Portland State was gonna be a good fit for me than all the other schools I had and they showed more love.”

Williams had a season high of 19 carries for 113 yards when Dorsey lost Serra to last September. He totaled stats of 84 carries, 572 yards, and seven touchdowns last season, according to Maxpreps.

Both players considered the city championship game against Narbonne as the highlight of their senior year. Although trailing 29-7 at halftime, the Dons retaliated in the second half, chopping the deficit to two points.

“When Jerman [Gotoy] threw it to Jordan Wood, he had threw a bomb to him in the championship game. We was about to come back, everybody was happy for it, we all started celebrating,” Williams said. “It was a clutch play we needed.”

Their zeal and focus kept the Dons competitive, although the Gauchos clinched the title in a hard fought 42-34 victory.

“Us coming back and seeing the momentum, the crowd, everybody hyped up, it was just a great feeling,” Jordan said. “I was just happy we made it also, even though I wanted to win.”

Dorsey had a historical run in 2016 with a 10-4 overall record and a dominant 4-1 record in the Coliseum League. This led to a deep run in the playoffs; Dorsey had their first appearance in the City Section championship game since they won the title in 2001.

Jordan and Williams mentioned how they enjoyed their time at Dorsey. The coaches, football program, teachers and classes attributed to their experience.

“Game days are like the best part of the year,” Williams said. “It’s always fun those days.”