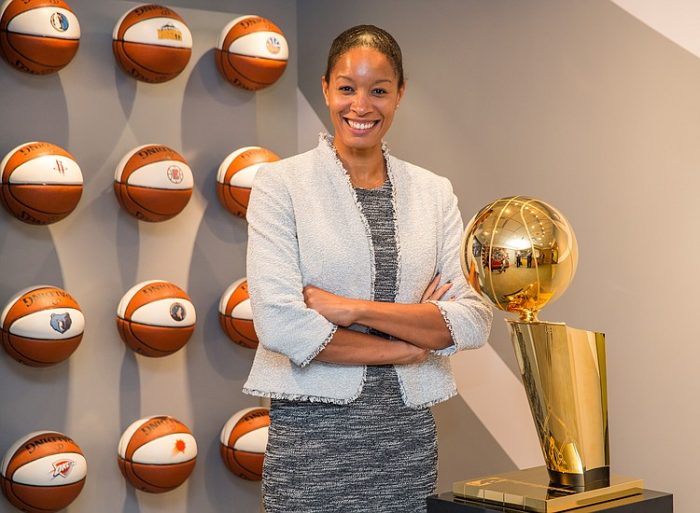 Former WNBA star Bethany Donaphin was named head of league operations this season and hopes to bring the player experience into the league offices. Her involvement in basketball and business will help her to be an asset in a league that is expanding.

“I hope that our players feel happy about the fact that there’s somebody in the league office and have a diverse background and one that they can identify with whether they’re of the same ethnicity or not,” Donaphin said.

The WNBA is going through one of its most competitive seasons in its history and Donaphin wants to maintain an infrastructure that complements the upward momentum of the league.

Along with her experience with being an athlete, Donaphin has a strong professional resume. In 2012, she earned an MBA from the University of Pennsylvania. She noted how using her network assisted her in forging a career path. Donaphin used those experiences to aide pro basketball players while she was an associate vice president of NBA operations.

The NBA started the NBA Basketball Operations Associate Program to give athletes proper skills so they can find work after they retire from basketball.

“It was about giving them the opportunity to gain some business fundamentals and be able to gain exposure across the league office departments,” she said. “ For me, it was really a personal initiative in the way that it’s tough for players when they’re done with their careers to have to start from scratch.”

Donaphin would urge any professional athlete to be proactive in researching possible post-basketball careers while they are still in the pros, as some wait until they are close to retiring to start searching for a new job when it can be more difficult. She noted how athletes should use their downtime to pick up an additional skill set off the court.

“When you are playing, you have every resource at your disposal,” she said. “If you’re interested in being in a front office at a team, you got an entire team operations in front of you when you’re a player.”

Prior to working the NBA, Donaphin worked with Deloitte consulting and Rosetta.  This added on to the skills she learned from business school.

“A lot of people I talked to have MBAs and I thought that that could be a great way to gain exposure quickly across a lot of different businesses and industries,” Donaphin said.

The new WNBA head of operations played for the New York Liberty in 2003 and 2004 and also played six seasons in Europe. Donaphin also played basketball at Stanford University.

“I think it goes without saying that basketball changed my life dramatically,” she said. “To be back with the WNBA, it’s certainly a dream come true.”