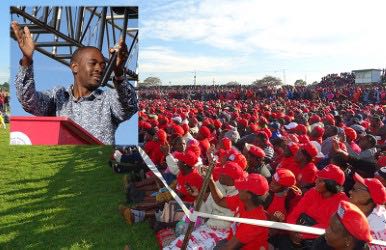 “To all those who can, please fast for your country. Then on July 29, it should be a national day of prayer.”

That was the message delivered by Nelson Chamisa, leader of the opposition, to his supporters in the Movement for Democratic Change Alliance.

According to Chamisa, the fast will ensure a smooth transfer of power from the ruling Zanu-PF to the MDC Alliance, the local NewsDay portal said.

The July 30 poll’s top two candidates are expected to be Chamisa and the incumbent, Emmerson Mnangagwa. Over a dozen other candidates are also running for the presidency.

Interestingly, although his name will not be on the ballot, former President Robert Mugabe is emerging as a key influencer in the electoral race.

His allies have entered the fray, seeking to spoil the victory party anticipated for Mnangagwa and Zanu-PF. A campaign against Mnangagwa, code-named “Bhora Musango” (kick the ball off target), is encouraging Zanu-PF members not to vote for the incumbent.

Among those is Godfrey Gandawa, the former deputy minister of higher education, who has openly revolted against Mnangagwa, telling a campaign rally in his constituency that Mnangagwa did not deserve their vote.

“He sidelined me and did not stand by me. He doesn’t deserve our vote. There are many other candidates for the presidential election we can vote for,” fumed Gandawa, who will contest as an independent candidate.

Zimbabweans worry the election will not end well. More than four in 10 expressed concern that incorrect election results would be announced, that the armed forces would not respect the result, and that post-election violence would occur, Afro Barometer said.