Let’s Be Good Mural by artist Sean MacCuish on the corner of 54th and Crenshaw.

A once outdated burnt orange wall on the corner of 54th and Crenshaw received a heavenly glow when an eclectic Los Angeles native and Howard University graduate set out to beautify South Los Angeles. Olympic Auset, the Founder and Creator of The GOYS Life and the #LighttheLaunch campaign, knew she had a charge to rejuvenate her community, and decided that art was the perfect remedy to boost morale, reduce crime and alleviate lackluster aesthetics in the Crenshaw corridor.

It all started when Olympia joined a local completion called “The Shine Challenge,” which provides the selected winner with $400 to do something good in their community. Not only did Olympia win, but she also worked diligently to pull resources together to create an art inspired wall that would bring light and love to those in the Crenshaw community.

The mural itself dons a bright turquoise background and features a melanin hued woman with illustrious hair blowing a multicolored bubble. For Auset, it was important to locate mural artists responsible for the paintings in more affluent areas of Los Angeles and bring them to South LA. In order to bring the concept to fruition, Auset was sponsored by Beautify Earth, a renowned non-profit organization whose mission is to “bring inspiring art to neglected communities world-wide, until no unkempt wall remains.” The murals intricate design and detail was done by artist Sean MacCuish, also recommended by Beautify Earth. Entitled “Let’s Be Good,” the mural certainly evokes a feeling of pride and unity.

“I started this mural because I very much believe in the power that people have to change their own environments. I knew that it was possible because there’s murals like this all over places like Santa Monica and Venice, and so I reached out to the people that were doing those murals and asked them about how to get one here [Crenshaw],” Auset said. 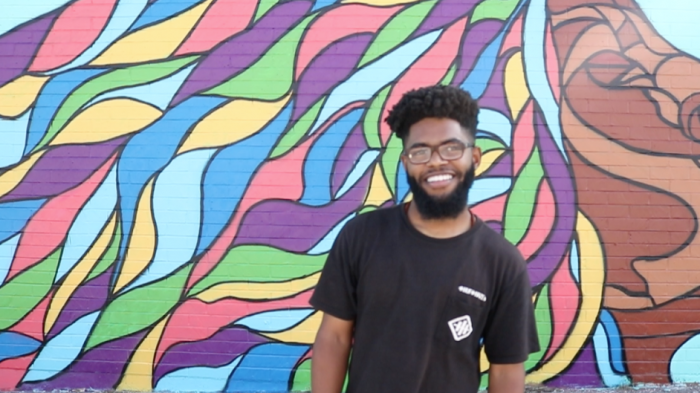 Mural contributor Lonnie Wade talks growing up near the once desolate area on 54th and Crenshaw.

While you may see a beautifully constructed mural now, the process was quite a feat. According to Auset, the wall took two months of planning and paint priming leading up to one full week of detailed mural artistry. The artist, Sean MacCuish “was actually painting on his birthday,” Auset told the Sentinel. She also raised funds on Crowdrise under “Bring Beauty to South LA” and garnered over 27 volunteers to help paint the walls’ background.

Lonnie Wade, a contributor to the mural and native to the area also shared more about the process and the total transformation. “We put a lot of our personal energy into this, you know being on scaffolds twenty feet high, it was just us painting,” he said. “It was a really interesting process in seeing how making something come to life and manifesting itself really works,” he continued. 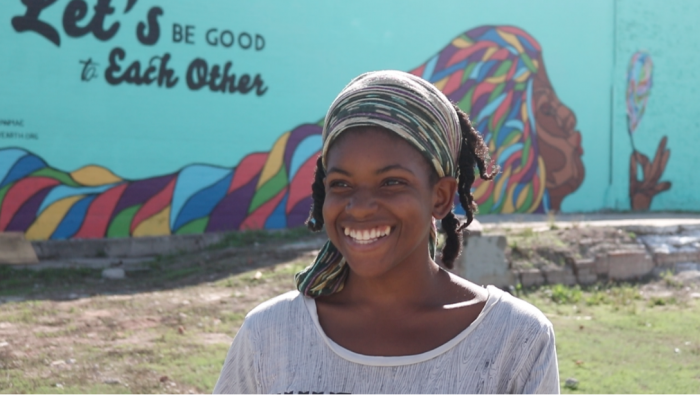 Mural contributor Lonnie Wade talks growing up near the once desolate area on 54th and Crenshaw.

Aside from the mural, which serves as a tremendous gift to South LA, Auset also started the #LighttheLaunch initiative, where part of the movement involves helping others to thrive by using small gifts and seeds of hope. In Auset’s Shine challenge video, she randomly provides “tap” cards to assist those with transportation needs and gift cards to Whole Foods as a seed meant to inspire healthy living.

All in all, Olympia Auset’s charge to the people of South LA is to “see what was done with a small amount of resources” and build upon the challenge to invest into their communities to affect positive and noteworthy change.