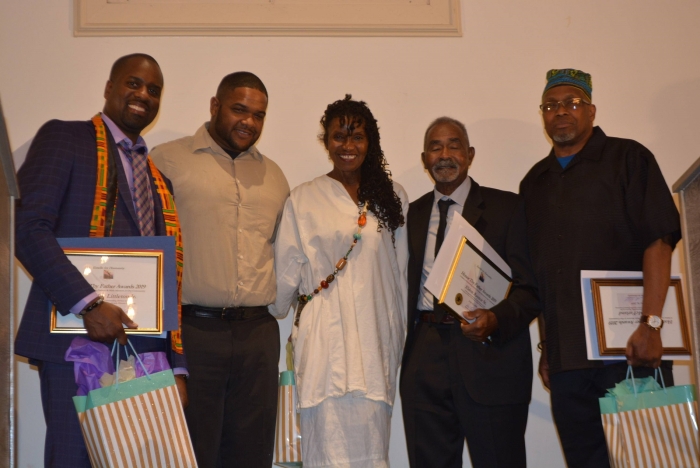 On June 16, Estelle For Humanity (EFH) gathered the village to celebrate fathers, husbands and mentors with the 18th Annual Honor Thy Father Awards (HTFA) dinner at The Proud Bird Food Bazaar & Event Center.

“It is an annual event that takes place every Father’s Day, honoring the unsung fathers and male mentors in the community,” said Denise Estelle, founder of EFH and HTFA.

Estelle is a Los Angeles native, born and raised, who graduated from Crenshaw High School and went on to attend California State University of Northridge. She continued her education at Windsor University, where she received her B.A. Degree with honors.

In 2001, she founded a program called Senior Circuit which provided services to senior citizens in the immediate area and Flower Fresh Mondays, where she delivered flowers to seniors every Monday. In 2009, Estelle founded the “Wooli Me” Natural Hair Expo & Conference, which according to her “was the first natural hair expo and conference for Los Angeles.”

As CEO of Estelle for Humanity, a 501c3 organization, which produces events every year that educate and inspire, she is making sure the men in the community are not forgotten.

“I birthed the Honor Thy Father Awards Dinner, because we make a big deal out of Mother’s Day, and Father’s Day receives very little recognition,” said Estelle. “There are so many good fathers out there, so I really felt the need to roll out the red carpet for the fathers, brothers, the men, the uncles and mentors on Father’s Day.”

This year, HTFA honored Baron Jay Littleton Jr., Brandon Robinson, Eldon Raynor Sr., and Norris McFarland.
Littleton, Jr. is a husband, father and business man. He is also a well -known writer, producer and director, who founded the Baron Jay Family Foundation in 2004, which gives back to disadvantaged communities.

Robinson is a roof technician, who works full-time assembling, installing, and modifying roofs, he is raising his three boys, and his daughter, with his fiancée. He is also a father and mentor who loves coaching and mentoring children in the Antelope Valley.

Raynor, Sr. is a father and husband, who is an accomplished cricket, soccer and golf player, who has represented Bermuda overseas.

He and his wife still run their award-winning, 40-year tourist vacation business along with other rental businesses.

McFarland is a former marine seargent, a native of Los Angeles, and devoted husband, who attended Azusa College on a track scholarship and Charminade University in Hawaii. He is known as a distinguished and honorable community leader, and father of three daughters. McFarland helps senior citizens by cleaning, painting, lifting furniture and reorganizing rooms in their homes. He and his wife are passing financial wisdom and goals down to the younger generations of their family.

The organization recognized and honored the four men along with their families, friends and community. Author, activist, journalist and producer, Pearl Jr. served as mistress of ceremonies and brand strategist, Gerry Foster, served as master of ceremonies. Coach and mentor, Michael S. Jones of Success Management served as keynote speaker. The audience was entertained with the sounds of percussionist Clarence “Chazz” Ross, keyboard artist, Mitchell Rhodes and actress and artist, Wanda Ray Willis.

Andre Parvenu, the associate producer of this year’s event shared, “ With the present rates of unemployment, incarceration, absenteeism, and other social-economic dysfunctions impacting our community, the strength of the “Father – Family Bond” is of extreme importance, making this one of the most significant events each year in the Greater Los Angeles community.

He continued, “Honor Thy Father heals families and brings out the best of those fathers, role models, and mentors that truly make a difference in our world, and this is what we need to turn the situation around.”

“Going into its 18th year, the Honor Thy Father Awards has acknowledged close to 150 men consisting of fathers, husbands, mentors and role models,” said Estelle.

For more information, and to register honorees for next year’s event, contact Estelle for Humanity at (310) 927-8339 and visit the website at www.honorthyfatherawards.com.