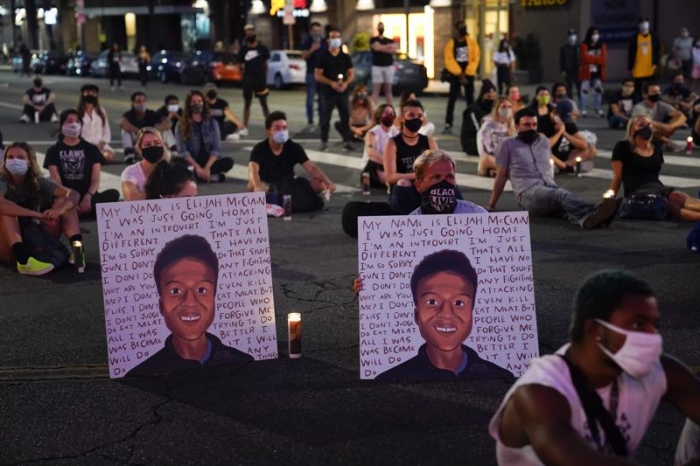 In this Aug. 24, 2020, file photo, two people hold posters showing images depicting Elijah McClain during a candlelight vigil for McClain outside the Laugh Factory in Los Angeles. Colorado police reform advocates say the recent indictments of three suburban Denver police officers and two paramedics on manslaughter and other charges in the death of Elijah McClain could be a pivotal step toward meaningful accountability. (AP Photo/Jae C. Hong, File)

The indictments of three suburban Denver officers and two paramedics on manslaughter and other charges in the death of Elijah McClain could be a pivotal step toward meaningful police accountability, law enforcement reform advocates say.

“Our hope has been renewed,” said Candice Bailey, an activist in the city of Aurora who has been a liaison between the community and police and has led demonstrations over the death of McClain, a 23-year-old Black man who was put into a chokehold and injected with a powerful sedative in 2019.

The charges come as Colorado’s elected leaders have taken strides to toughen repercussions for officers accused of wrongdoing in the wake of nationwide racial injustice protests last year that reawakened outrage over McClain’s death.

State lawmakers passed a sweeping police accountability law, which bans the use of chokeholds like the one used on McClain and requires officers to intervene to stop excessive force from being used. The law has helped lead to charges against some officers and allowed the state attorney general’s office to open a civil rights investigation into the Aurora Police Department.

Democratic Gov. Jared Polis ordered the attorney general last year to open a new criminal investigation into McClain’s death after a prosecutor opted against charges in 2019. An outside review of Aurora police policies also was quickly launched by the city and Police Chief Vanessa Wilson, who has vowed to regain the public’s trust since taking over the department last year.

Police stopped McClain as he walked home from the store on Aug. 24, 2019, after a 911 caller reported a man wearing a ski mask and waving his hands who seemed “sketchy.” Officers put McClain in a chokehold and pinned him down. Paramedics injected him with 500 milligrams of ketamine, an amount appropriate for someone 77 pounds (35 kilograms) heavier than McClain’s 143-pound (64-kilogram) frame, according to the indictment. He was later taken off life support.

A grand jury indicted three Aurora officers and two paramedics on charges of manslaughter and criminally negligent homicide, state Attorney General Phil Weiser announced Wednesday. Some face additional charges. They all turned themselves in and were released on bond.

Marc Sears, president of Aurora’s branch of the Fraternal Order of Police, which says it’s the largest union representing police in the city, told the Sentinel Colorado newspaper that “our officers are innocent until proven guilty, and we stand by our brothers.”

Bailey said she cried when she heard about the charges and believes they “will likely change the gravitation of what happens in our community and other communities in this nation.”

Deborah Richardson, executive director for American Civil Liberties Union of Colorado, said the indictments are a step in the right direction but that they don’t mean the work is over.

“It opens the doorway, but in terms of if this is going to be part of a momentum of change, that’s really up to us,” Richardson said. “We don’t select the police chiefs, we don’t determine who wears the uniform. But we do elect the public officials that are responsible for that and we need to hold them accountable.”

Richardson also attributed the nationwide shift on “egregious behavior by law enforcement” to social media and video that keep the cases alive and accessible. Richardson compared it to her experiences growing up in Atlanta during the civil rights movement. She said national television broadcasts of police beating civil rights protesters marching from Selma to Montgomery, Alabama, changed public opinion.

“Justice is moving forward because the people of Colorado elevated Elijah’s story to the entire world and demanded change and because of Sheneen McClain’s tireless fight for reforms and for Colorado’s first-in-the-nation police accountability law,” she said.

Elijah McClain’s mother said she had her first peaceful sleep in a long time after learning about the indictments. Sheneen McClain is pleased the officers involved will lose their jobs and could go to prison, but importantly, that her son’s death did not get forgotten.

“I’m definitely satisfied because my goal as Elijah’s mom was to make sure the world knew what happened to him and somehow hold Colorado accountable for the people that they employ,” she said. “Our humanity matters. That’s one thing Elijah believed in.”

Nieberg is a corps member for the Associated Press/Report for America Statehouse News Initiative. Report for America is a nonprofit national service program that places journalists in local newsrooms to report on undercovered issues.