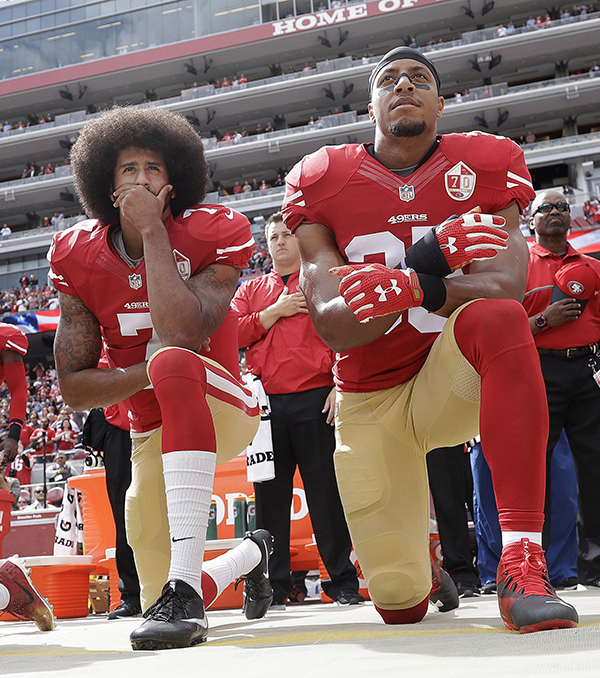 FILE – In this Oct. 2, 2016, file photo, San Francisco 49ers quarterback Colin Kaepernick, left, and safety Eric Reid kneel during the national anthem before an NFL football game against the Dallas Cowboys in Santa Clara, Calif. The NFL players’ union has filed a non-injury grievance on behalf of free agent safety Eric Reid. The NFLPA cites one team appearing “to have based its decision not to sign a player based on the player’s statement that he would challenge the implementation of a club’s policy prohibiting demonstration” during the national anthem. (AP Photo/Marcio Jose Sanchez, File)

Owners of the 32 NFL franchises decided to augment the policy of protesting the National Anthem to punish players who publicly demonstrate during the playing of the song. The new policy allows the league to fine teams for protesting and allows players the option to stay in the locker room while the national anthem is being played.

The policy leaves teams to decide what actions are respectful or not and reprimand players who conduct themselves in what a franchise may consider as “disrespectful” when the “Star Spangled Banner” is being played.

“We’re not forcing anybody to stand who doesn’t feel that that’s within the way they feel about particular subjects. But those that are on the field are going to be asked to stand,” said Pittsburgh Steelers owner Art Rooney II. “We’ve listened to a lot of different viewpoints, including our fans, over the last year. I think this policy is meant to come out at a place where we’re respecting everybody’s point of view on this as best we could.”

The NFL Players Association was not consulted on the change of policy until after it was finalized during a two-day owners meeting. Many NFL players expressed their disdain of the new policy.

“Everyone loses when voices get stifled,” Super Bowl champion safety Malcolm Jenkins. “The national conversation around race in America that NFL players forced over the past [two] years will persist as we continue to use our voices, our time and our money to create a more fair and just criminal justice system, end police brutality and foster better education and economic opportunities for communities of color and those struggling in this country.”

On Friday, many Civil leaders and Social Justice groups protested in front of the NFL headquarters in New York. Speakers during the protest equated the NFL to a plantation system.

“The slave owners have said that if the slaves get out of line, we will show them,” said Black activist Tamika Mallory. “The question is: What will the rest of us do about them putting the slaves in line?” 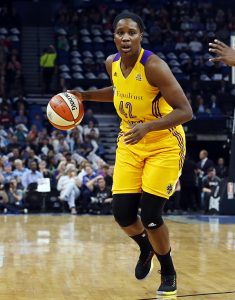 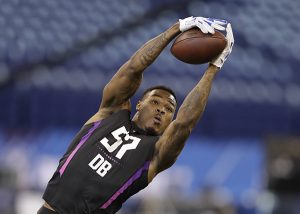