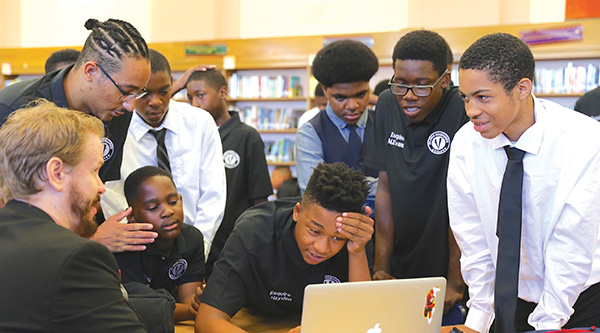 “In this generation we’re going to need to know a lot about tech because in school, instead of paper, we use computers to do our homework,” began 14-year-old Joshua Jordan. “So I’m sure that learning more about coding will be a great opportunity for us to be ahead of the other kids at our school.” The high school freshman is referencing the latest tech initiative of the mentorship program, Alpha Esquires which was spearheaded by Tina Fitch, Co-Founder and CEO of the event invite app, Hobnob.

For the past year, Jordan along with over fifty African American males from South Los Angeles have been learning invaluable life skills through Alpha Esquires, an after school program which is led by members of Alpha Phi Alpha Fraternity Inc.

Founded in 1906 on the campus of Cornell University, the Alpha’s have historically promoted the principles of scholarship, fellowship, good character and the uplifting of humanity. Within their bi-monthly workshops, the Alpha men strive to promote these same ideals within their Esquires.

Since it’s inception in 2010, the Alpha Esquires (formerly known as the Alpha MEN-tor Program) have had a wide range of sessions with topics that cover college prep, financial literacy and etiquette. They’ve recently introduced a technology component designed to help the young males stay competitive in the work force.

Despite the fact that social media’s most popular apps like Instagram, Twitter and Snapchat have existed for less than a decade, Esquires President, DeShon Andrews understands that not broadening the program’s curriculum would be a disadvantage to the boys. “I’m 47-years-old and in my era, if you were a police officer, a fireman or in social services, you were able to live a good life; that’s no longer the case; technology is the way of the future,” said the LAPD Detective and father of three. “If we want our kids to be on par with the competition, we have to do everything in our power to ensure that they have access which is the tool to bridging that gap. So bringing in Hobnob was the solution.” 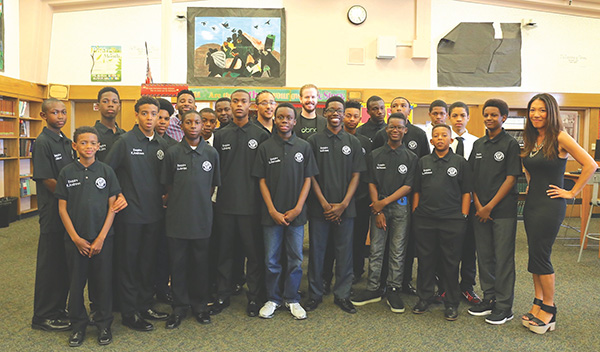 Having previously co-founded the travel-commerce and loyalty SaaS (software as a service) platform, Switchfly, as well as Hobnob, Tina Fitch knows firsthand about the disproportionate number of minorities who are active tech users verses tech creators. During her collegiate days at UC Berkley, Fitch first met several of the Alpha Phi Alpha members who would later become principal mentors with the Esquires. Fitch shares, “I witnessed their consistent, continuous dedication to mentorship of young black men since that time. They did all of their work away from the limelight, without accolades or compensation, with such a strong moral compass and passionate belief in the importance of breaking the cycle they were seeing in inner cities.”

As a proud Alpha Esquires board member, Fitch was passionate about aligning Hobnob with the mentorship program because she as well as her diverse team understands the immediate need to expose inner city youth to careers in computer science. “We discussed my desire to build more opportunities for under-represented minorities in tech; our interests and trust in each other converged to make this program,” added Fitch.

Despite African American’s undeniable cultural impact on social media from launching viral dance challenges, memes and more seriously the political affects of the #BlackLivesMatter movement—less than five percent of engineers are black or Latino. “The world needs you, the tech industry needs you” said Fitch during a recent session with the Esquires.

Accompanying Fitch to further spark the Esquires interest in tech was software engineer Christopher Ketant and Hobnob’s Mobile Architect, Tommy Hanks who is also the creator of iFoundry, a non-profit coding academy for underprivileged youth.

“Tina brought in young dynamic speakers to relate to the kids,” said Andrews. “What was surprising to me, they were already interested in coding and animation but I had no idea so it was the right thing at the right time. I was so amazed at the things the boys grasped in the first session. I just sat back and was grateful that we brought Hobnob into the fold because the things that they were talking about went over my head.” 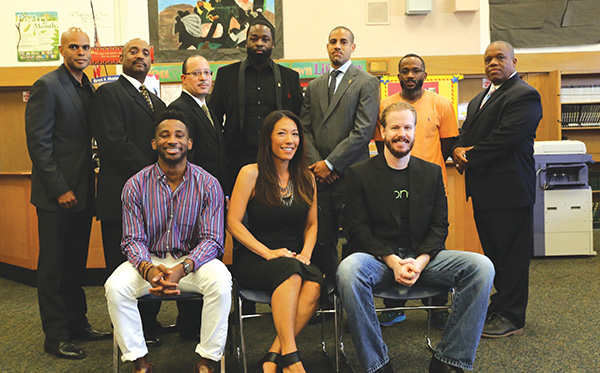 While many of the Alpha men that volunteer their time to the program are elite professionals that work within various industries including law enforcement, education and the medical field, we still live within a society where many African American males aspire to be rappers or athletes. With the addition of the tech component, the Esquires have now been presented with a plethora of new career opportunities.

“There’s a young man who only talked about being a basketball player but at the conclusion of the tech workshop,” recalled Andrews. “He said, ‘Maybe if being a basketball player doesn’t work out, I could create some type of statistics app that collects data about the players in a fun way.’ By the end of the first session, he came to that conclusion that there was an alternative way that he could still be connected to something he loved. By simply being exposed to something that he had never had any interest in before, it really struck a chord with him.”

Oftentimes, when students have a career day in school, while a seed may be planted, there’s rarely any follow through. However, the Alpha Esquires are committed to ensuring that their boys receive an immersive tech experience.

In 2017, the Esquires will begin a six-month curriculum where they’ll be taught coding online through iFoundry. By next summer, the Esquires will also have the opportunity to participate in a new STEM (Science, technology, engineering and mathematics) program.

On the importance of the progressive new initiatives that were introduced by Hobnob, Andrews explained, “It was a matter of us getting out of our comfort zone to realize what careers are out there for the next generation. It was about letting them know that with hard work and determination they can be whatever they want to be.”

He added, “The thing about it is, they just need to have access–A lack of success is often due to a lack of access. So we want to make sure that whatever their interests and desires are, we do our best to provide those opportunities to them.”