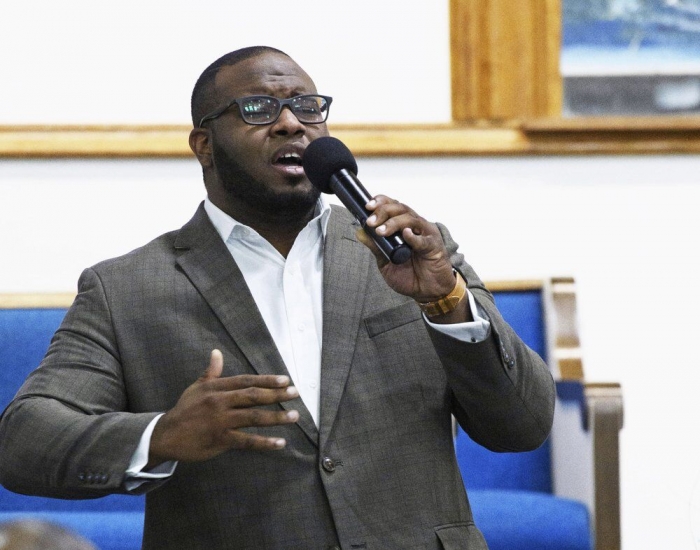 In this Sept. 21, 2017, file photo, provided by Harding University in Searcy, Ark., Botham Jean leads worship at a university presidential reception in Dallas. Fired Dallas police Officer Amber Guyger, who shot and killed Botham Jean, an unarmed 26-year-old neighbor in his own apartment last year, was found guilty of murder by a jury on Tuesday, Oct. 1, 2019. She told police she thought his apartment was her own and that he was an intruder. (Jeff Montgomery/Harding University via AP, File)

Botham Jean organized church mission trips. He installed Skype for elderly parents who missed their kids. One time he met a stranger who shared his mom’s birthday, so the bighearted 6-foot-1 choir singer got the woman a cake.

He cried after getting a job in Dallas at the powerhouse accounting firm PwC. His eyes were set on senior management when his downstairs neighbor, a white Dallas police officer, entered his apartment, drew her gun and fatally shot him.

Jean “was a near-perfect person of color,” said Ben Crump, an attorney for the Jean family. “A 26-year-old college-educated Black man, certified public accountant, working for one of the big three accounting firms in the world … it shouldn’t take all of that for unarmed black and brown people in America to get justice.”

The jury that convicted Amber Guyger of murder heard testimony Wednesday as it weighed punishment for the 31-year-old former police officer, who says she believed she was in her own apartment and mistook Jean for an intruder. She faces up to life in prison for the September 2018 killing.

Jean’s family and activists in Dallas, a diverse city where the mayor, police chief and district attorney are all Black, rejoiced over the verdict, calling it a hopeful sign of turning tides on police accountability in the deaths of unarmed Black men. Jean’s mother, Allison Jean, held her hands up in prayer in the courtroom, saying “God is good.”

For Botham Jean, prayer was everything.

In his native Caribbean island country of St. Lucia, Jean won trophies for academic excellence, started a choir and organized school clubs. He confided to an uncle that he aspired to become the prime minister of the mostly black population of about 180,000 people.

Allison Jean has said her son, the middle child in her family, was socially conscious and mindful about being black in America after leaving the island to attend Harding University in Arkansas.

She told The New York Times last year that he drove the speed limit and kept his car in good repair. When she asked why he wore such dressy clothes, according to the newspaper, Jean told her he didn’t want police to stop him and think he was somebody he wasn’t.

Who Jean really was, attorneys told the mostly black and Hispanic jury, was a literal choirboy. The deeply religious young man spent Sundays on the phone with his father critiquing sermons and writing his own.

His mom fretted about affording college in America. St. Lucia’s currency is weak against the U.S. dollar. But Jean — who also went by “Bo” — was determined to attend a Christian campus where he could sing.

“It was almost his aura. When he went to a meeting or he joined your group or whatever it was, you knew Bo. He was just big personality, nice person, big smile,” said Kerry Ray, Jean’s boss at PwC. “Never really had a bad thing to say about anybody.”

Crump said spotless character shouldn’t be required for minorities in the U.S. to get justice. Even Jean’s family and activists had been on guard for character attacks, at one point fuming that a smear campaign was afoot after police revealed early in the investigation that marijuana had been found in Jean’s apartment. Guyger’s attorneys did not make an issue of Jean’s marijuana use, and it came out during the trial that Guyger herself admitted to having used pot when she applied for a job with Dallas police. Jean’s sister, Allisa Findley, told jurors her brother used marijuana after not liking how he felt on Adderall, which he was prescribed for attention hyperactivity disorder.

She said Jean was excited about his life. She wanted her baby brother to move closer to her in New York, but he told her he still had career plans in Dallas.

Their last conversation was the night he died. Jean was about to turn 27 and had just two cooking pans in his apartment. He wanted Drake concert tickets for his birthday, but Findley was bent on a more practical gift.

“I told him, ‘I thought we agreed you were going to be a grown up this year?’” Findley recalled. “He said, ‘OK, fine. Get me the pots and pans.’”