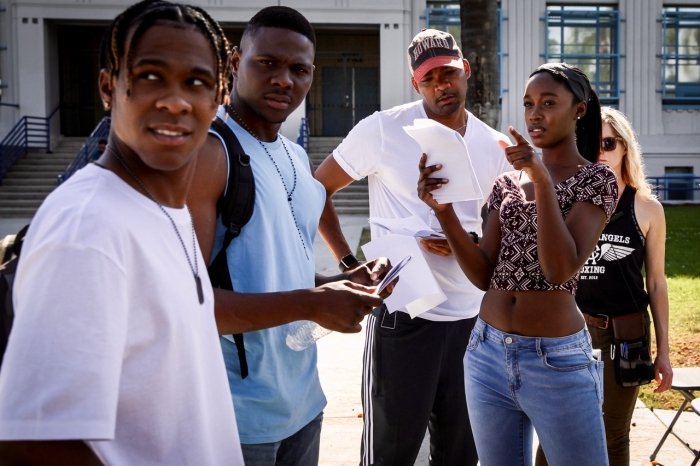 Dallas Jackson, 3rd from right, with members of the cast of “Thriller.” COURTESY PHOTO

Writer, director and producer, Dallas Jackson is methodically building his entertainment empire. This news is a reason to celebrate because Mr. Jackson is unapologetically Black and more to the point, he’s making it his mission to open those closed doors for other gifted people of color.

If you are one of the millions of Netflix customers then you might already know the work of the very talented Jackson because his slasher film “Thriller” is now playing on the streaming giant.

“Thriller” is not your usual horror-slasher movie. To begin, it is executive produced and scored by rapper RZA — add 100 points to the proverbial scorecard. The film features an all African-American cast. That’s huge because Black characters in other horror and sci-fi films are usually the first to die. There are so many jokes that have been shared over the years about that fact that when something like “Thriller” comes along (and is on Netflix) you must stop and take notice.

In Jackson’s “Thriller,” what starts out as a cruel childhood prank turns deadly when the painfully shy kid, Chauncey Page (played by Jason Woods) accidentally kills one of his tormentors.

In a panic, the kids accuse Chauncey of murder and he is sent to prison. Fast forward and these kids swallow their guilt and get on with their lives. Years later Chauncey is released and the now tall and intimidating figure returns to his neighborhood and those kids, now teenagers, fear that he may want to confront them about the horrible past.

Set just days before their high school graduation and the big homecoming party, their fear turns into panic when members of their crew start turning up murdered in increasingly gruesome ways. Is this Chauncey getting his revenge? Or is something or someone else on a killing spree?

The Los Angeles Sentinel caught up with the writer-director Dallas Jackson who is preparing for his next film to discuss filmmaking and how the late, great John Singleton made his career possible.

This is an edited version of an hour-long conversation.

Los Angeles Sentinel: Dallas Jackson, sir I am so proud of you. Thank you for taking the time from your busy schedule to chat with us.

Dallas Jackson: You kidding? It’s the Los Angeles Sentinel. I told my public relations team, I want you guys so, no, thank you for speaking with me.

DJ: (Laughing) [Netflix] It’s like 7-Eleven. They’re there for you 24/7, and that’s the reason I was excited about Netflix releasing “Thriller.” The idea of people being able to watch it whenever they want, wherever they are. It’s an interesting way now to watch movies and you have the liberty to watch it five times if you so choose. That’s crazy.

LAS: A little birdy told me, you are about to blow up! My birdie is never wrong. What’s brewing?

DJ: (Laughing) You know what’s funny two years ago, I was sitting on my couch and asking God and wondering what’s going on. What’s your name?

LAS: Lapacazo, I’m Mexican, African American, and Native, of the land. Black Indian there are so many of us, really.

DJ: I know. My grandfather was a Black Indian.

DJ: I believe he was Cherokee. He was originally from Oklahoma. I didn’t know too much about my grandfather because he passed when I was very young. He was a Black cowboy. There is a tribute to my grandfather in the Black Cowboy Museum, in Colorado. There is this picture of him on horseback with my grandmother. He paid for her. She was a sharecropper so he paid for her to leave the plantation, put her on horseback and they traveled from Oklahoma to Colorado to buy land.

LAS: I have chills. When I first called you were on the phone with a major entertainment company and had to call me back. Are you making deals?

DJ: (Laughing) Well yes. You know 2012 to 2016 was a rough period for me. I had been out here in Los Angeles writing and selling screenplays and I had one movie made, “Uncle P” which is a family comedy. I went through a period after that where I had a first look deal at 20th Century Fox. I sold a script to MTV Films and I was writing the screenplay for “The Last Dragon” remake for Columbia Pictures and I was developing a television at Starz and another at ABC Family. None of these things had gotten made. In 2008, I wrote the screenplay “The Last Dragon” and Samuel L. Jackson was attached to star. He went with me and Barry Gordon’s son to pitch the remake of the movie. Once we started along this journey, it looked like the movie was going to get made. In 2010, we had a director and were moving forward. In 2011, there was a regime change at Sony [Pictures] and the movie didn’t look like it was not going to go. The money stopped coming because the script was finished and the next time I got paid was when the movie was going to get made. And it didn’t get made. I was so focused on that project because it was so close, that I didn’t have too many irons in the fire. So, I was living in Baldwin Hills and the money stopped flowing in. My wife and I, and at the time, our son was three-year-old and my daughter was just born and we realized that we had to downsize.

LAS: I am hearing you and I am listening. This isn’t an easy career for sure.

DJ: Exactly. We moved from our house to a one bedroom apartment in an area which is called the jungles in South Central. From 2012 to 2016, we lived in that one-bedroom apartment. My kids didn’t know we were struggling. My wife and I were going through a financial struggle. We were trying to get out of this place. The thing that got me out was continuing to write and meeting [the late] John Singleton.

LAS: Dallas, I just got chills …

DJ: He transformed my life. My wife is also a writer and she wrote a project called “Rebel” but let me start at the beginning.

LAS: How did you meet John? 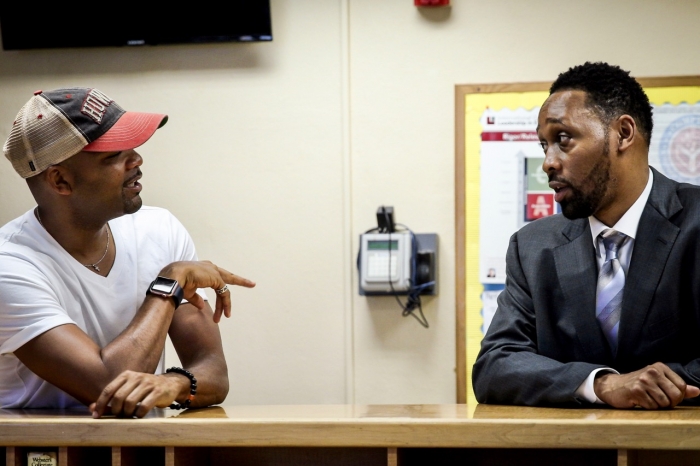 LAS: That was a great Oscar party for you!

DJ: It was because that night John [Singleton] and I bonded. We talked about movies that we love and why we love those movies. We talked about executives we didn’t like. We talked about things that people who love movies and make movies talk about. We left that party and went to two other [Oscar] parties that night. In the wee hours of the morning, I realized that I had just spent the entire night with John Singleton. A week later we sat down for lunch and I gave him my wife’s screenplay (“Rebel”) and he suggested that we do it as a television show. I did the leg work because I’m good at that and he showed up; it was beautiful. BET gave us a pilot commitment [for “Rebel”] and that turned into a series for John to direct; we produced ten episodes and that got us out of the one-bedroom apartment.

LAS: So now Dallas you’ve added director to your skill set. Was becoming a film director something you always wanted to do?

DJ: (pause) Well, I was following John around and he really opened my eyes. He said [Dallas] you are a really good writer, you can be a good director.’ He challenged me to get a notebook and to follow him around so I understood what a director does, from the start to the finish. It really opened my eyes. So when I had the meeting with Blumhouse Productions, I made it clear that the screenplay that I was writing as a “Scream” meets “I Know What You Did Last Summer” meets “Halloween” with Black and Latino kids in the lead roles. Blumhouse was just coming from “Get Out” and they wanted to do more movies with ethnic leads, so they responded to “Thriller.” They also asked if I was following [director] John Singleton around? And I said ‘yes’ and they said, ‘Why don’t you direct [“Thriller”]?’ That was in 2017 and that summer I was shooting my first film as a director.

DJ: I asked John to be the Executive Producer on “Thriller” because I owed all of this to him and he declined.

DJ: Yes because was like ‘No man, it’s your movie, go do it!’ He didn’t want any credit for anything. He wanted me to spread my wings on my own. “Thriller” turned me from a screenwriter to an official [film] director. We premiered “Thriller” at the Los Angeles Film Festival and John was in the audience and he was like a proud father. In retrospective, it was all God.

LAS: I am officially inspired. What’s next?

DJ: Now I am preparing a new film for NBC-UNIVERSAL it’s a remake of “Sudden Death.” It’s an action, martial arts film starring Michael Jai White. We will shoot in August and it will be out June 2020. We are shooting in Winnipeg, Canada. It’s a martial arts version of “Die Hard.” It takes place in a sports arena. Winnipeg has this huge sports arena that their hockey team plays in and they are letting us take it over for the summer. It’s this super cool Staple Center type of interior that we are going to shoot in. I am the producer, writer, and director on this.

DJ: Thank you. You know, looking back at that one-bedroom apartment, it all really started there because I had to figure a way out and my wife pitched in and wrote “Rebel.”

DJ: A team. Looking back, I know it’s all divine. It all started with our need to get out of that tiny apartment but if we were not there, I would not have met John [Singleton]. This is all divine planning. Sometimes when you think that you are down it’s really a blessing from God. 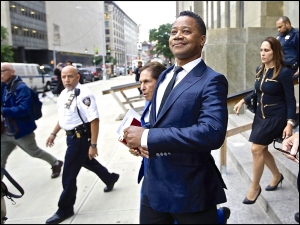 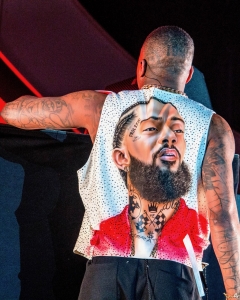 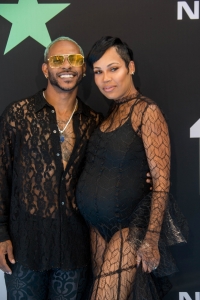 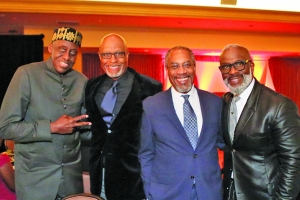