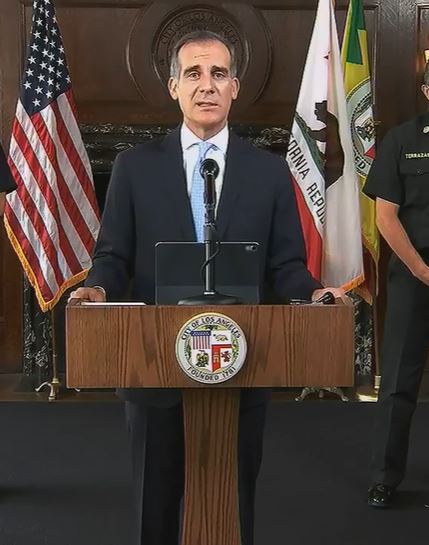 Mayor Garcetti updated Los Angeles on safety measures taken due to the rise in violence amid the George Floyd protests. There is concern of public protection, there is call for action from the mayor. Garcetti elaborated on the significance of peaceful protests. According to Garcetti, progression will come through peace. Those who attended the protest on Saturday, May 30, stated it began peacefully, but as night fell the rioting and violence began to peak. Mayor Garcetti confirmed the protest started off with no issues but as the sun began to set, the images seen were the “ugliest in a generation.”

City Patrol worked throughout last night, trying to calm the city streets from the havoc it was facing. Some cops ended up physically injured, but the mayor stated that the risk of danger is not new to the L.A. Police Force. Garcetti acknowledge thoughts of the system being racist and rigged against a certain people of color. The Los Angeles City Mayor touched on how the riots has hindered the recovery for small businesses and progress made amid the COVID-19 pandemic. He stated the violence and looting is clouding the message peaceful protesters are trying to convey. City leadership is developing plans to clean up the streets and provide a safe space for peaceful freedom fighters to stand for their beliefs.

Restoring the peace and finding the common ground are the principles Los Angeles Leaderships is standing on.  Public officials are looking to tap into all existing resources to protect the city, starting with a citywide curfew. From 8pm-5:30am the city is under a strict surveillance, making sure businesses and events are closed during those times. Law enforcement across the state came to aid LAPD and based off the conversation with the California State Governor the mayor had the opportunity to call in the National Guard. He accepted the help from the national guard and declared the riots a state emergency. 500 National Guard Personnel will be in L.A. to back up law enforcement, the L.A. Chief Police spoke more about what role they will play.

L.A. Police Chief Michael Moore summarized the details of the protests that happened this weekend; as night fell there was violence against officers, cars and busses were on fire. Hours after the protests broke up, there were expressions of destruction. Tactics and strategies are geared to maintain order, further measures have been taken to gain control over the violence happening across the city. National Guard arrived hours after the request on Saturday night, they will join the Los Angeles Police and be engaged in the community and be stationed on foot at locations to safeguard certain businesses. The National Guard is planning to stay as long as they are needed.

City infrastructures were interrupted because of the violence seen in the streets. The testing sites were closed early yesterday due to rioting, Mayor Garcetti stated volunteers were not feeling safe enough to work. Some COVID-19 testing sites will remain closed on Monday, June 1, but the largest testing location at the Dodger Stadium will remain open. Brought on by request of LAPD, Dash and Metro busses were taken off route last night, people were stranded throughout the city. Some Dash routes have resumed on Sunday and all of Metro is up and running.

“The rage must not consume us, it must not be turned back on us. We know it is only with peace that progress will follow. We must not allow any who feast off of chaos, who hunger for division who want to replace peaceful protest with images of a nation coming apart; we must not let them win.” The mayor stated black lives matter and people from every ethnicity are confirming that message, Garcetti ensured the protest yesterday had the intention of being organized and peaceful. He declared as long as he is in office, he will lead the entire city government to protect the right to be heard. The mayor is calling for a peaceful and safe expression of those rights. Garcetti explained that the small percentage of people who are causing destruction, are hi-jacking a moment and movement and re-directing the focus away from the cause.