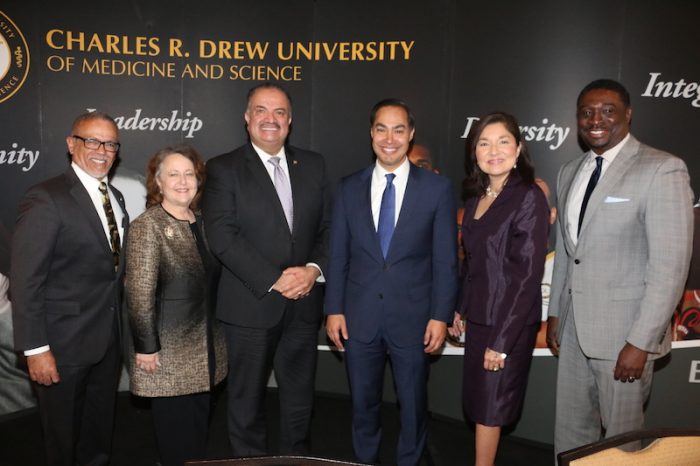 Julián Castro, a candidate for the 2020 Democratic presidential nomination and former U.S. Secretary of Housing and Urban Development under President Barack Obama, provided the keynote address at a panel discussion entitled “Diversity in Higher Education: Race Matters” at Charles R. Drew University of Medicine and Science’s (CDU) fourth annual President’s Breakfast on Tuesday, February 19,  at the Marina Del Ray Marriott.  The panel was moderated by CDU President/CEO Dr. David M. Carlisle and featured other notable leaders from academia, business, philanthropy and healthcare who have been champions of equality.

Secretary Castro noted the tremendous competition we face as a nation and the importance of providing access to education to all.  “The U.S. needs well-educated people now more than at any time in our history,” he said.  “If we want to compete in the 21st century, there’s not a single person we can waste.”  But he decried the income inequality that makes it difficult for many—especially those from communities of color—to get the education they want.   “America is the land of opportunity, but it’s also an America in which it’s more and more difficult for people of color to get ahead,” he said.

He called for the nation to “invest early in the success” of children in under-resourced communities, especially those at pre-kindergarten age, “when the child’s mind is growing,” and to “make higher education more affordable and accessible,” including four-year universities, communities colleges and apprenticeship programs.

With the U.S. projected to become a majority-minority country within three decades (and with California already there), diversity in higher education has become a pressing national topic.  “It’s not only a matter of social justice and education equity, it’s a matter of national competitiveness,” said CDU president and CEO Dr. David M. Carlisle.  “California will be 2.4 million college-educated workers short of workforce demand by 2030.  Students of color who are currently disadvantaged on college campuses are needed to meet future workforce demands.  It’s in everyone’s interest for them to have the education to prepare them for those jobs.”