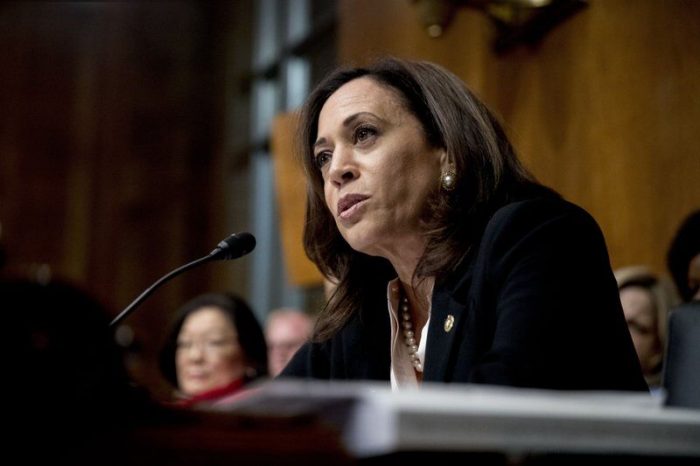 The senator from California said she would back legislation requiring states with a history of restricting abortion rights to receive clearance from the Justice Department to change abortion laws.

The move comes as the issue of abortion moves to the forefront of the presidential campaign. Harris is among the Democratic presidential candidates who have been sharply critical of a new spate of abortion laws that have cleared state legislatures and sharply curb abortion access. Supporters of such measures have openly predicted that the laws could spark court fights that will eventually lead the Supreme Court to revisit the landmark Roe vs. Wade decision.

Harris has specifically spoken out against anti-abortion bills that were passed in Georgia, Alabama, Ohio and Missouri. She is expected to highlight her preclearance proposal later Tuesday during a town hall televised on MSNBC.

Her approach could face steep legal hurdles. The preclearance requirement resembles a provision of the Voting Rights Act of 1965 that prohibited a number of states, largely in the South, from changing voting laws without seeking approval from the federal government.

But in 2013, the Supreme Court effectively struck down the core of the Voting Rights Act and ruled that the formula that determined which states needed to seek federal approval before changing their voting procedures was unconstitutional.

In his majority opinion, Chief Justice John Roberts wrote that Congress was free to try to impose federal oversight on states where voting rights were at risk but must do so based on updated data.

Black Fact of the Day: May 30, 2019 – Brought to you by Black365
LAPD Officer Charged With Falsely Submitting Timesheets
Man Sentenced to 25 Years to Life for Robbery Spree