On the heels of the country’s dire political state, the 21st century oppression of Blacks in America, trap music and the somber passing of music icon Prince, the 2016 BET Awards wrought in a multifaceted representation of strength in numbers by way of artistry and culture.

After a slew of fashion forward artists, actors, public figures and Beyoncé’s dancers hit the grey carpet in their Sunday’s best, the show got started with a memorable performance from Beyoncé and Kendrick Lamar. The duo, who performed to an intensified version of Beyoncé’s song “Freedom,” rocked out to excerpts of Dr. Martin Luther King Jr.’s “I Have a Dream” speech, while kicking and stomping atop a pool of water with a fiery red ambience. The visual served as an emotional outcry to incite change in the treatment of blacks in America.

Actors Tracee Ellis Ross and Anthony Anderson hosted the event for the second year in a row, making their grand entrance with a Shakespearean “Hip-Hop Musical,” dressed in 18th Century gear, also featuring Anthony Hamilton in a musket. The duo kept the audience alive throughout the remainder of the night, with several costume changes and electrifying epilogues of pop-culture.

As noted in advertisements leading up to the show, BET made a concerted effort to properly honor the life and legacy of Prince, executing a whopping four-set tribute throughout the evening. In a very sensual and soulful set, Erykah Badu and Bilal kicked-off the tribute, giving fur, leather, braids, and suspenders a run for their money. Bilal sent spectators into a climax with his rendition of “The Beautiful Ones,” eventually tearing off his shirt while gliding the freshly waxed stage floor.

Not to be outdone, Jennifer Hudson donned an all-white ensemble reminiscent of Prince’s style and sass, shutting the place all the way down singing “Purple Rain”. Legend and great friend of the late Prince Stevie Wonder also performed alongside Tori Kelly, rhythmically singing to “Take Me With U”.

In true melodic form as one of Prince’s self-proclaimed protégés, Janelle Monae hit the stage in white, lace, and frills, performing “Delirious,” “Kiss,” “Pop Life” and “I Would Die 4 U”. A pleasant surprise for the audience, Monae bared her melanin toned buns in light of Prince’s ensemble from his 1991 VMAs performance. To cap off the tribute to Prince, Sheila E. gave her all in a renowned medley honoring the creative soul, slaying the drums, thrumming the guitar, and flaunting her footwork while Prince hits electrified the Microsoft Theatre.

Meanwhile, new artist Desiigner caught the trap-star version of the Holy Ghost in his “Panda” performance, catching several celebrities in the audience off guard with his super hype energy. Fans and Photoshop fiends took advantage, placing the artist’ performance photos amidst hilarious backgrounds befitting of his dramatic expressions.

To switch gears, Jesse Williams delivered the quintessential #staywoke speech upon receiving BET’S Humanitarian Award. Williams exhorted those in the crowd and at home watching to mobilize and stand up in the face of adversity to protect the lives, culture and integrity of blacks in America.

“This award, this is not for me. This is for the real organizers all over the country, the activists, the civil rights attorneys, the struggling parents, family teachers and students that are realizing that a system built to divide and impoverish and destroy us cannot stand if we do,” Williams declared in opening statements.

Williams implored the people not to simply stand by and get money without effecting change in their communities. “The burden of the brutalized is not to comfort the bystander… If you have no interest in equal rights for black people then do not make suggestions to those who do,” Williams stated. “Just because we’re magic, doesn’t mean we’re not real,” Williams vowed in closing.

As the night continued with a slew of performances from rising star Bryson Tiller, Chloe X Halle, Bibi Bourelly, and Alicia Keys, Remy Ma and Fat Joe took things “All the Way Up,” performing their features on French Montana’s hit in true comeback form.

In foresight of the critical election season at hand, celebrities raised their voice in sublime opposition to Donald Trump. “I’m really not political, but it’s serious out here, and for those that think, ‘Oh he’s not gonna win, think again,” Taraji P. Henson stated while accepting the award for Best Actress.

Usher capitalized on the opposition, wearing a nature green bomber jacket with the words “Don’t Trump America” inscribed on the back during his “No Limit” performance. Tracee Ellis Ross inadvertently welcomed Hillary Clinton to the White House, professing her own status as a single woman seeking her representation.

To end the evening, legendary actor Samuel L. Jackson was honored with the BET’s Lifetime Achievement Award for his brilliant works of art in film and television during the last 40 years. The living legend was given the award by director Spike Lee, dubbing the actor as “one of the greatest actors on this God’s planet.” Jackson thanked God for his place of talent and influence saying “A young man who grew up in segregated Tennessee that nobody ever told I could be this. So, here I am and who you are, and thank God for that.”

All-in-all, the 2016 BET Awards captured all that is Black in America, from arts, to culture, politics and our fervent cry for freedom, yet and still in the 21st century. 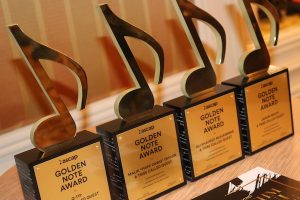 ON THE WEB: Tavis Smiley