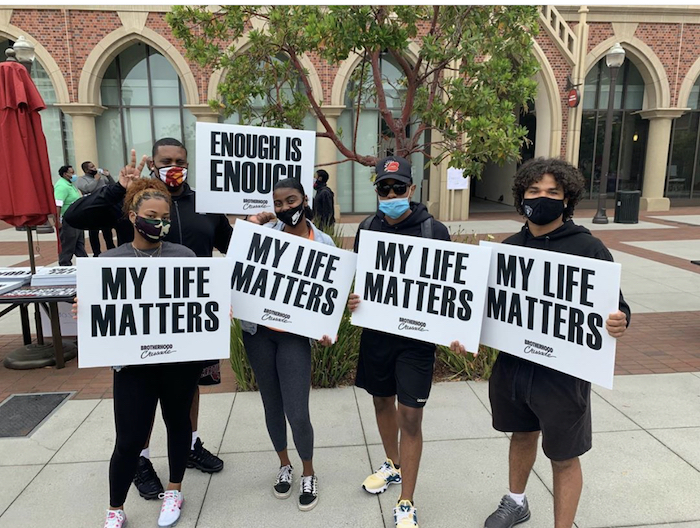 Local youth participate in a rally at USC to fight against racial injustice. (Bertram Keller/L.A. Sentinel)

On Saturday, June 27, 2020, the youth organized a march for Black lives. The rally was organized by adjunct professor from the University of Southern California and activist, Dr. Diandra Bremond; in partnership with the Brotherhood Crusade organization, Los Angeles Laker’s Youth Foundation, and Keeping It 100 Solutions.

President and CEO of Brother Crusade, Charisse Bremond Weaver said, “The bulk of our work is with young people. We serve over three thousand young people, and so, it is important for them to have a voice in the community as we are in a fight against institutional racism and police brutality.”

The range of protesters was children, groups of parents, a few off-duty police officers, USC faculty and students. The majority of protesters conveyed an upbeat spirit throughout the march. Some were dancing and hyping themselves up for the march while others were designing signs that read: “ENOUGH IS ENOUGH,” “MY LIFE MATTERS,” and “EQUALITY!” USC Professor Dr. Diandra Bremond said, “right now is the great awakening, and I’m happy that our kids and our youth can come out and fight for justice.” Bremond acknowledged that the resolution for systematic oppression is not a simple one but it is “multifaceted,” and “the community has to be at the center of the conversation. Our elected officials, our government has to step up and that is at the local, state and federal levels.”

Councilman for the New 9th District Curren D. Price, Jr. and Assemblymember of the 59th District Reggie Jones-Sawyer, Sr. were in attendance and spoke out to the crowd of fresh-faced protesters and activists. Jones-Sawyer said, “It took over 400 years for us to get to this place. So, don’t just expect it to change overnight … we have got to continue to fight everyday if we want something to change.”

Thereafter, Councilman Price offered a brief discourse of his efforts to defund the LAPD, in which he had been strong advocate of reducing the LAPD budget by as much as $150 million and redirect the money back into Black communities. Councilman Price claimed that “As the only person of color on the budget and finance committee, my proposal was not accepted.  The committee chose to divert 130 million into a kind of general fund that can be used for a variety of other things. That’s not acceptable; that’s not good enough. On Tuesday, this matter will be before the City Council again, and you have a chance to have some say so.” Evan, a USC student, when asked about the message behind the ‘Defund The Police’ slogan, said “the idea of the slogan, ‘Defund LAPD’ or ‘Defund the Police’ is stemming from a call to divest and to reinvest into the communities that are suffering from a lack of education programs, housing programs, along with the environmental crisis that has been going on across our nation. That will create an even playing field across the board; rather than having this over militarized, overly violent police program receiving million upon millions of dollars.”

The march for Black lives began in the USC village, and concluded outside of the California African American Museum (CAAM). Students led the entire march, loudly and proudly, screaming out “No justice! No peace!” and exclaimed that “Black youth matter!” as cars drove by honking to display their support. A new generation of leadership has arrived. Since the tragic murders of innocent Black lives, many feels there seems to be no rest without equal opportunity and social accountability in the United States.