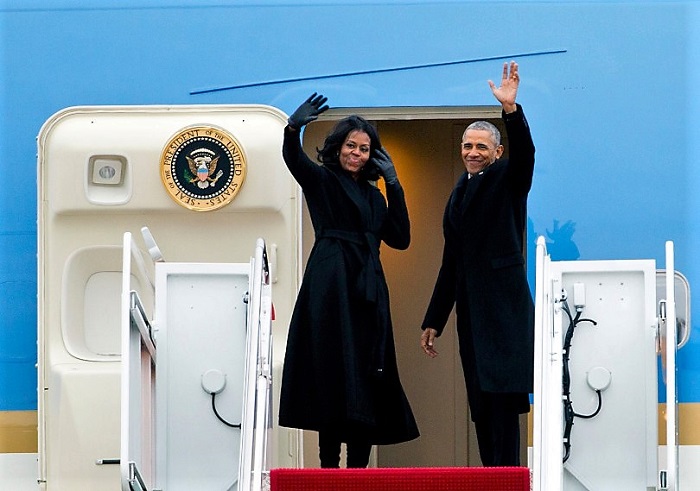 President Barack Obama and first lady Michelle Obama wave from Air Force One at Andrews Air Force Base, Md., Tuesday, Jan. 10, 2017. Obama is traveling to Chicago to give his presidential farewell address, continuing a tradition established by the nation’s first president more than two centuries ago. ( AP Photo/Jose Luis Magana)

Those were the words that Barack Hussein Obama ended his farewell speech to America on Tuesday, eight years after he won the presidency, campaigning on the slogan, “Yes, we can!”

For nearly an hour, the nation’s 44th Commander-In-Chief reminded everyone that history will not only show him to be the first — and perhaps only — Black president, but time will reveal just how well a job Obama did after inheriting a nation at war, reeling in debt and cowering in fear every time Homeland Security raised the threat level.

Passing the Commander-In-Chief baton to Donald Trump has revealed that a large swath of Americans already miss Obama, First Lady Michelle Obama and the First Family.

“It’s easy to lose sight of that in the blizzard of our minute-to-minute Washington news cycles. But America is a story told not minute to minute, but generation to generation,” Obama told the more nearly 18,000 spectators who crammed into Chicago’s McCormick Place Lakeside Center to see him deliver his farewell address, while tens of millions more watched on television.

Obama continued: “We’ve made America a better, stronger place for the generations that will follow. We’ve run our leg in a long relay of progress, knowing that our work will always be unfinished.” 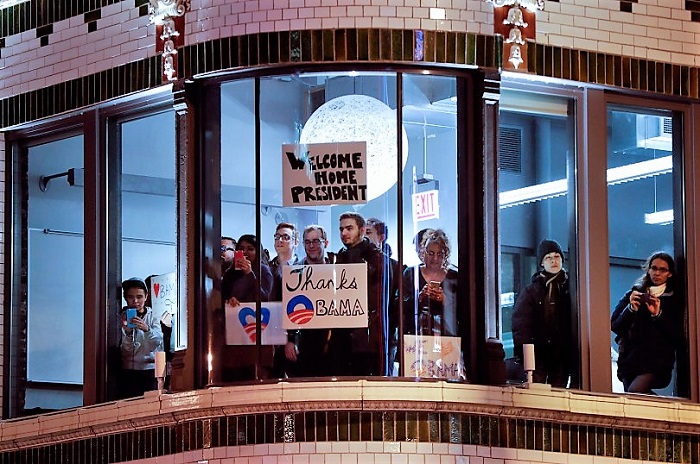 Obama noted that he fulfilled his goal of making quality, affordable health care not a privilege, but a right.

After nearly 100 years of talk, and decades of trying by presidents of both parties, that’s exactly what he did, administration officials said.

Obama said the hardscrabble streets of cities like Chicago is where change happens.

“After eight years as your President, I still believe that. And it’s not just my belief. It’s the beating heart of our American idea — our bold experiment in self-government,” he said. “It’s the conviction that we are all created equal, endowed by our Creator with certain unalienable rights, among them life, liberty, and the pursuit of happiness. It’s the insistence that these rights, while self-evident, have never been self-executing; that ‘We, the People,’ through the instrument of our democracy, can form a more perfect union.”

The president highlighted some historic achievements during his two-term tenure, noting that America is safer. He mentioned the dismantling of al Qaeda’s leadership, including the operation that killed Osama bin Laden. Obama,also spoke of his support of the historic and sweeping rights and protections for LGBT Americans, and making the country’s immigration system fairer and safer while also tackling poverty and investing in communities.

Expanding voting rights, increasing transparency in government and reversing electoral gerrymandering that has contributed to increased polarization in Congress, were also among the issues the president tackled in his farewell address.

In speaking of his successor, Obama vowed a peaceful transition. However, he also told Americans not to simply go along with Trump.

“Democracy does not require uniformity. Our founders quarreled and comprised, and expected us to do the same,” Obama said. “But they knew that democracy does require a basic sense of solidarity; the idea that for all our outward differences, we are all in this together; that we rise or fall as one.”

The president received some of the loudest cheers of the night when he spoke about the racial tensions in the country.

“After my election, there was talk of a post-racial America,” he said. “Such a vision, however well-intended, was never realistic. For race remains a potent and often divisive force in our society.”

While progress has been made, Obama said, “we’re not where we need to be.”

Obama added: “All of us have more work to do. After all, if every economic issue is framed as a struggle between a hardworking, White middle class and undeserving minorities, then workers of all shades will be left fighting for scraps while the wealthy withdraw further into their private enclaves.” 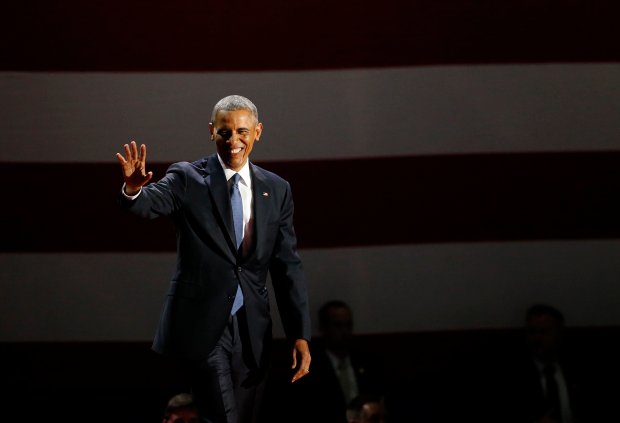 For a transcript of the full speech, visit https://www.whitehouse.gov/farewell.