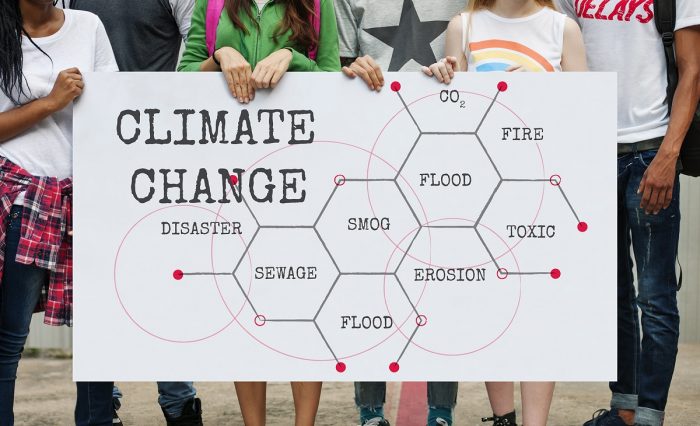 As legislators and activists continue to debate and sound the alarm over global warming and extreme weather, West Los Angeles College has launched a Climate Change and Environmental Studies Associate of Arts Degree program.

“We believe this is the first degree of its kind offered by a California Community College,” said Dr. James M. Limbaugh, College President. “Establishing this program at West has been a personal goal of mine,” he continued. “In their recent report, the IPCC [Intergovenmental Panel of Climate Change] explicitly states that we are at a critical juncture. It is vitally important that our students understand the long-term implications our actions have on our environment—and on our future. I applaud the leadership shown by our science faculty in creating this important degree program.” While other institutions offer programs that center on the environment, West’s new program aims to specifically study climate change – making predictions based on comparing and contrasting the long term averages of conditions for a region including temperature records, precipitation records, fire hazards, drought susceptibility, species range shifts and more. The program will provide a broad background in the science of climate change, but also has components in disciplines such as humanities and social sciences, explained Jennifer Cole, assistant professor of Earth Science. Cole has an expertise in paleoclimate and earth surface processes. She received her B.A. from Rutgers University and Ph.D. from State University of New York at Stonybrook. She completed a postdoctoral fellowship at The Earth Institute at Columbia University. “We’re focusing on one issue which is climate change but you can see how history, economics and biology can interact,” Cole said.

“Dr. Limbaugh wanted to make sure that this program was not a science major exclusively, but also that it had a good foundation in societal impacts as well. You could take that knowledge of how things interact and use it to apply to a huge variety of career paths and majors.” With the evolving global changes, explained Cole, has come an increased demand for environmental and climate control jobs. Opportunities include researchers, technicians, sustainability coordinators, policy lobbyist, science writers and more.

“We have a creative group of people that live here,” Cole said. “So this degree offered here in Los Angeles has the potential to really link people who want to have a bit of a science background, but also want to make an impact in terms of how to improve society for the present and for future generations.”

According to NASA, increased carbon dioxide and the release of other human-made emissions into the atmosphere have been largely responsible for the planet’s average surface temperature rise of about 1.62 degrees Fahrenheit since the late 19th century. An IPCC press release says their October 2018 Global Warming of 1.5Co special report urges the world community make “rapid, far-reaching and unprecedented changes in all aspects of society…With clear benefits to people and natural ecosystems, limiting global warming to 1.5°C compared to 2°C could go hand in hand with ensuring a more sustainable and equitable society.” It continues, “The report highlights a number of climate change impacts that could be avoided by limiting global warming to 1.5°C compared to 2°C, or more.

For instance, by 2100, global sea level rise would be 10 cm lower with global warming of 1.5°C compared with 2°C. The likelihood of an Arctic Ocean free of sea ice in summer would be once per century with global warming of 1.5°C, compared with at least once per decade with 2°C. Coral reefs would decline by 70–90 percent with global warming of 1.5°C, whereas virtually all (>99 percent) would be lost with 2°C.” Here in California, Cole elaborated, as people move into wild lands and replace native, fire-resistant plants with exotic plants, there could be increased wildfire risk. The state will also continue to see changes with water availability, and is expected to experience longer, more severe droughts and sea level rise. But the future need not be grim, Cole continued. “Humans are different from any other species because we are innovators, we can solve problems and we can adapt,” she said. “We’ve made tools and other kinds of technology that allow us to not just live but also do well in any kind of environment. We don’t want to think selfishly. If we could just remember that we’re part of this whole planet together and our actions impact a lot of people, then I think we could actually make it so that it’s not all doom and gloom. We need better education to help people recognize how connected we are as people and how connected we are to this planet as a whole.” Core classes for the new Associate degree are Global Climate Change, Environmental Ethics and Statistics. Students will then work with Cole and/or an academic counselor to select courses which emphasize science, humanities or business to achieve the degree. West Los Angeles College is located at 9000 Overland Avenue, Culver City, CA 90230.

The college is a ACCJC accredited community college providing full-time, part-time and online paths to university transfer and career preparation.