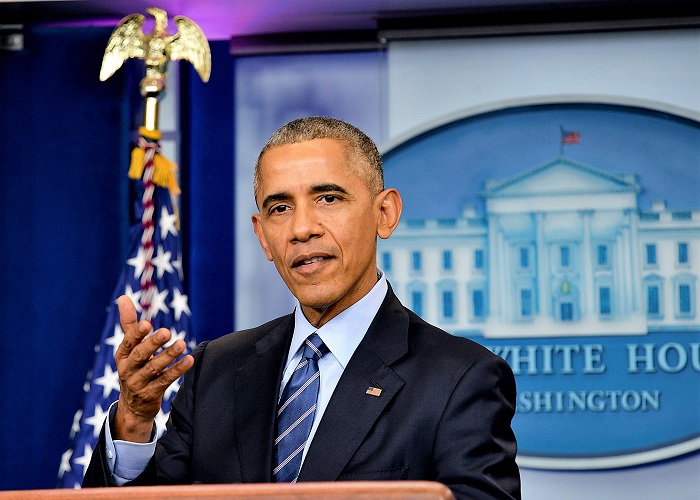 President Obama speaks during his last press conference of 2016 at The White House. (Freddie Allen/AMG/NNPA)

President Barack Obama used his last press conference of the year to reflect on the accomplishments of his administration over the past eight years.

“As I was preparing to take office, the unemployment rate was on its way to 10 percent. Today, it’s at 4.6 percent — the lowest in nearly a decade,” said Obama. “We’ve seen the longest streak of job growth on record, and wages have grown faster over the past few years than at any time in the past 40.”

Even as the economy approaches full employment, however, the Black unemployment rate (8.1 percent) is almost twice the White unemployment rate (4.2 percent), according to the Labor Department; a gap that has persisted since the federal government started collecting separate jobs’ data for Blacks nearly 50 years ago and that no president has been able to address.

“When I came into office, 44 million people were uninsured. Today, we’ve covered more than 20 million of them,” said Obama. “For the first time in our history, more than 90 percent of Americans are insured.”

Still, disparities in healthcare also persist. The uninsured rates for Blacks (12 percent) remains higher than the uninsured rates for Whites (8 percent), and according to the Kaiser Family Foundation (KFF), Blacks, American Indians and Alaska Natives have a higher prevalence of asthma, diabetes, and cardiovascular disease.

“Health disparities are particularly striking in the burden of AIDS and HIV diagnoses and death rates, with Blacks experiencing over eight and ten times higher rates of HIV and AIDS diagnoses than Whites,” the KFF reported. “Infant mortality rates are significantly higher for Blacks and American Indians and Alaska Natives compared to Whites, and Black males have the shortest life expectancy compared to other groups.”

Obama also noted that his administration, over the last eight years, has dramatically decreased the number of troops deployed abroad and eliminated Osama Bin Laden as well as thousands of other terrorists.

“No foreign terrorist organization has successfully executed an attack on our homeland that was directed from overseas,” said Obama.

Obama continued: “Through diplomacy, we’ve ensured that Iran cannot obtain a nuclear weapon — without going to war with Iran. We opened up a new chapter with the people of Cuba. And we brought nearly 200 nations together around a climate agreement that could very well save this planet for our kids.”

But the progress that Obama made to address climate change in the United States and through partnerships with other world leaders could be undone during the next administration.

The Washington Post reported that, “Pruitt, who has written that the debate on climate change is ‘far from settled,’ joined a coalition of state attorneys general in suing over the agency’s Clean Power Plan, the principal Obama-era policy aimed at reducing U.S. greenhouse gas emissions from the electricity sector.

Despite his accomplishments, Obama acknowledged that there was still a lot of work to do particularly on the issues of homelessness, job creation, income inequality and gun violence.

“After I leave office, I intend to continue to work with organizations and citizens doing good across the country on these and other pressing issues to build on the progress that we’ve made,” said Obama.

Nationally, Democrats have lost more than 1,000 elected seats since Obama took office. Democrats also serve in the minority in both the House of Representatives and the United States Senate.

Obama also said that Democrats have to promote their policies “where people feel as if they’re not being heard and where Democrats are characterized as coastal, liberal, latte-sipping, politically-correct, out-of-touch folks.”

Obama continued: “That’s how I became President. I became a U.S. senator not just because I had a strong base in Chicago, but because I was driving around downstate Illinois and going to fish frys and sitting in VFW halls and talking to farmers.”

Obama said that the Democratic Party has to work at the grassroots level and has to be present in all 50 states, taking their message directly to voters.

“I still believe what I said in 2004, which is this red state/blue thing is a construct. Now, it is a construct that has gotten more and more powerful for a whole lot of reasons, from gerrymandering to big money, to the way that media has splintered,” said Obama. “ And so people are just watching what reinforces their existing biases as opposed to listening to different points of view. So, there are all kinds of reasons for it.”

People care about their families, meaningful work, and they want to make sure their children have more opportunities than they did and Obama said that is the common ground where Democratic leadership needs to reach voters and speak to all Americans.

“People have asked me how do you feel after the election and so forth, and I say, well, look, this is a clarifying moment. It’s a useful reminder that voting counts, politics counts,” said Obama. “What the President-elect is going to be doing is going to be very different than what I was doing, and I think people will be able to compare and contrast and make judgments about what worked for the American people.”