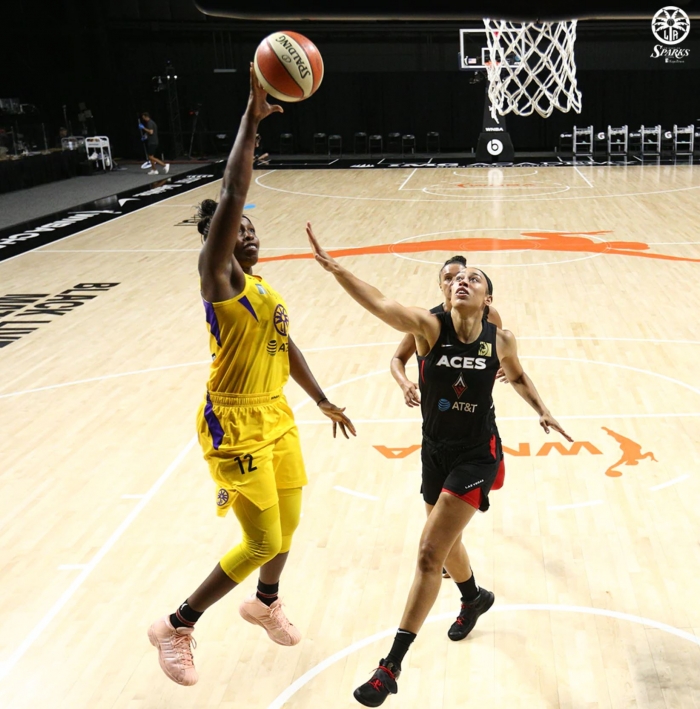 In a back and forth fast pace game that came down to the closing minutes, the Las Vegas Aces defeated the Los Angeles Sparks 86-82, picking up their fourth win of the season on Friday in Bradenton, Fl.

Candace Parker recorded her fourth double-double of the season with 20 points and 12 rebounds, Sydney Wiese had a season-high 18 points and Chelsea Gray added 16 for the Sparks.

Aces third year star A’ja Wilson recorded her third double-double of the season with a game-high 26 points and 11 rebounds, Angel McCoughtry had 24 and Jackie Young added 15.

“We still have high expectations. We still know that we are going to be where we need to be at the right time, but there are no short-cuts to becoming great. We can’t kid ourselves into thinking we can just show up and be great,” Fisher said. “It’s going to take time, going to take adversity, and it is going to take us asking ourselves the hard questions and finding the answers and solutions to get us to where we are trying to get to. There is no short-cut or way around that, its hard work and a journey.”

The Sparks were out the services of Nneka Ogwumike and Seimone Augustus who were both nursing soft tissue injuries and missed throughout the game.

“I think we just need to commit and trust and help each other,” Parker said. “I think if we rebound, and we out-rebound them, there’s not many teams that are going to want to stay with us in transition.”

Both teams traded baskets in the third, resulting in the Sparks taking a brief 63-62 one-point advantage into the fourth.

However, it was Wilson and Young who took over the game in the final period, combining to score 17 of Las Vegas’23 points, resulting in a hard fought 86-82 win for the Aces.

“I’ll take that one, that’s who I was on the last part of the fourth. She was making great plays,” Wiese said on defending Young. “What I was failing to do was cutting her off and making her go the other way. I was trying to get under the screen and I stopped short. She had an angle to the basket and made tough shots.”