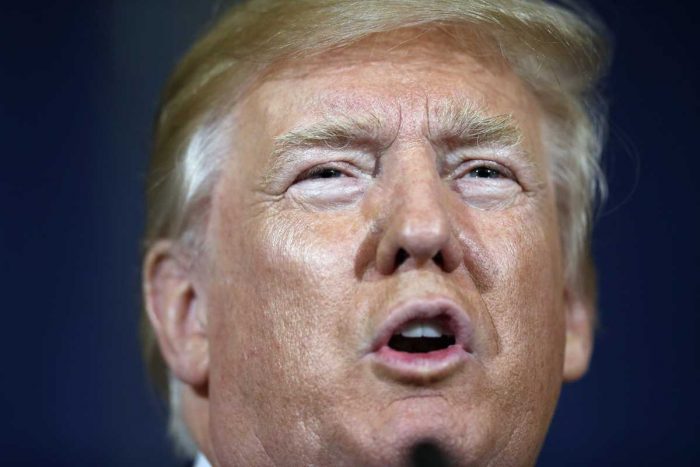 In this July 24, 2017 file photo, President Donald Trump speaks during an event about healthcare in the Blue Room of the White House in Washington. Republicans have been unable to advance a health care bill in Congress, so what’s next? President Donald Trump’s administration now may find itself in an awkward role as caretaker of the Affordable Care Act, a law that he’s still promising to repeal and replace. The Constitution says presidents “shall take care that the laws be faithfully executed.” That doesn’t seem to leave much choice for Trump, even if he considers the law to be “a disaster.” Democrats say they fear “sabotage.” (AP Photo/Alex Brandon, File)

As Americans, at some point in our education, perhaps even from early childhood, we have been taught that the President of the United States is the leader of our nation, often being exalted as “the leader of the free world”. With this mantle of leadership, the words of the president, for better or for worse, reflect on our nation as a whole, influence global perceptions of our nation, shape public policy, and can directly influence the hearts, minds, and actions of the American citizenry.

As attorneys, before we can be admitted to practice law in any state bar organization, we must take an oath, which begins, verbatim, “I solemnly swear (or affirm) that I will support the Constitution of the United States . . .” The Oath of Public Office for the State of New York, which must be uttered by every sworn police officer or public official before being entrusted with official responsibilities, begins with this exact same language. Not surprisingly, this adherence to the Constitution is additionally reflected in the Oath of Office for the President of the United States, affirmed by Donald Trump himself on January 20, 2017:

The requirement of allegiance to the Constitution for official service reflects the importance of this document to our national identity. It is more than a written framework for our laws and system of government, it represents our DNA as a nation, defining the inalienable rights of persons within our borders, and prescribing fundamental limitations on the power of the government to impose its will on the individual. It follows that the president of the United States is, through the very oath of the office, expected to protect, defend, and preserve constitutional principles at all costs.

In a speech delivered to a group of law enforcement officials in a New York suburb last Friday, President Trump, quite literally, encouraged their use of excessive force, stating “When you see these thugs, being thrown into the back of a paddy wagon, you just see them thrown in, rough, and I said, ‘Please don’t be too nice,’ like when you guys, put somebody in the car, and you’re protecting their head, you know, the way you put their hand up like don’t hit their head, and they’ve just killed somebody. Trump added, “Don’t hit their head, I said You can take the hand away OK?

When a president, who campaigned on the platform of being a supporter of “law and order” deliberately advocates police lawlessness, the unspoken consequence is not only the breaking of the “law”, but the disintegration of “order” within the social fabric of the communities that these same officers are entrusted to protect and serve. As has been repeatedly demonstrated, the abrogation of police accountability is always associated with a police culture that fosters an “us versus them” attitude among rank and file officers and members of the communities they serve. Unknown to most is the systematic erosion of public safety attendant to this culture. Examples of this are apparent when distrust of law enforcement officers precludes their ability to solve crimes. Where the use of force is concerned, a culture of police violence progressively increases the level of tension and anxiety between police and civilians, which exponentially increases the likelihood of a violent resolution to an encounter that would otherwise be avoidable. Time and again, experience has shown that the most effective way for law enforcement officers to function is with the support and trust of the communities they serve.

While many officers and lawmakers in attendance enthusiastically applauded and cheered the president’s remarks, the immediate repudiation of Trump’s message from the top brass of many law enforcement agencies provided an encouraging suggestion of the core integrity of the leadership of these departments. High ranking officers from the police departments of New York, Los Angeles, Gainsville, New Orleans, and, most notably, Suffolk County New York, which hosted the event, were united in their public affirmation for the rule of law, recognizing the importance of departmental policies requiring the reasonable use of force in officers’ interactions with arrestees, and their intent to enforce these policies. Most significantly, these public displays of respect for the rule of law amid the president’s appeals to lawlessness affirm that, as a nation, we need not digest our president’s repeated appeals to our lower natures. We cannot stop the president from talking. We cannot stop him from tweeting. We cannot stop him from delivering divisive and inflammatory speeches, but we do not have to follow his lead. We do not have to buy in to the cultural war that he is seeking to impose upon our nation. We do not have to adopt and practice the divisiveness and cruelty that he seeks to engender among the American citizenry. When our president demonstrates that he is not going to be bigger than this, we certainly can be.