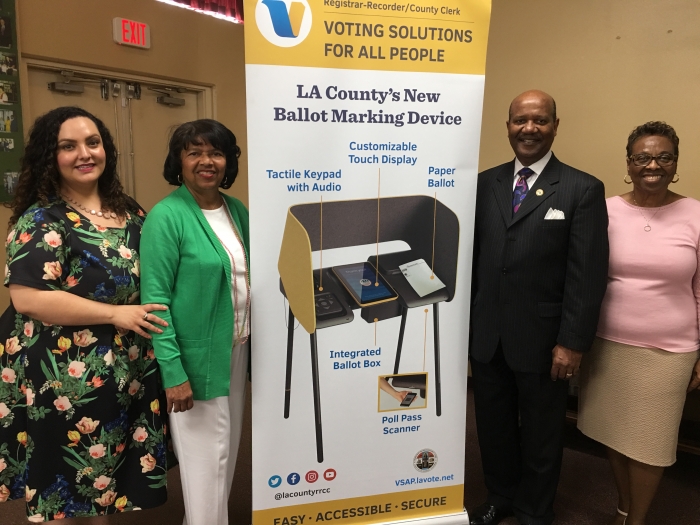 Changes are coming for L.A. County voters starting with the 2020 elections. According to the Registrar-Recorder/County Clerk’s office, their new program makes the process easier and more user friendly and accessible for residents.

Laura Herrera, County Clerk project assistant, outlined the new system – Voting Solutions for All People or VSAP – during a community meeting hosted by First AME Church and Alpha Kappa Alpha Sorority on June 8.  Explaining some of the changes, she noted that voters would no longer be limited to casting their ballots at an assigned polling place.

“Our new model will offer up to 1,000 voter centers throughout the county and people can vote at any of them,” said Herrera, who added that approximately 42 centers will be in the South L.A. area and full language services will be available at all sites.  Also, voting will be expanded to an 11-day period, with centers accepting ballots beginning Feb. 22, 2020, for the March 3, 2020 elections.

Other improvements include E-Pollbooks, which will verify registration eligibility and allow for same day voting; a secure Ballot Marking Device (BMD), which produces a verifiable paper ballot and decreases unauthorized access or hacking; an Interactive Sample Ballot that lets voters pre-mark selections on a computer or personal device and then transfer their choices to the BMD; a redesigned, easy-to-understand Vote by Mail ballot, which can be dropped off at more than 150 locations; and a new tally system that incorporates image processing technology to ensure that voting results are accurately reported.

“In addition, there will be mobile and pop-up BMD units that will be available for disabled, nursing home and homeless residents,” Herrera said. In-depth training for poll workers is underway as well.

The new voting information was well-received by the 60+ people in attendance, along with FAME Pastor J. Edgar Boyd, who had started a campaign about 18 months ago that focused on increasing voting in the Black community. The committee includes FAME members, faith leaders and neighborhood advocates.

“We organized a group called African American Get Out the Vote to get our people ready for the 2020 election. The good thing about this new voting procedure is that you can go and register on the same day that you vote. That makes it easier for everybody. Nobody has the excuse ‘I didn’t know where to register.’ This voting center allows for all of that,” said Boyd.

“Voting is one of the tools and powers that the African American community has to engage in that bring an increased quality of life,” he continued. “Oftentimes, we’re disallowed participation in so many ways and our vote – our power at the ballot box – engages us to participate in the process with equity.”

Learn more about the new voting process at vsap.lavote.net.