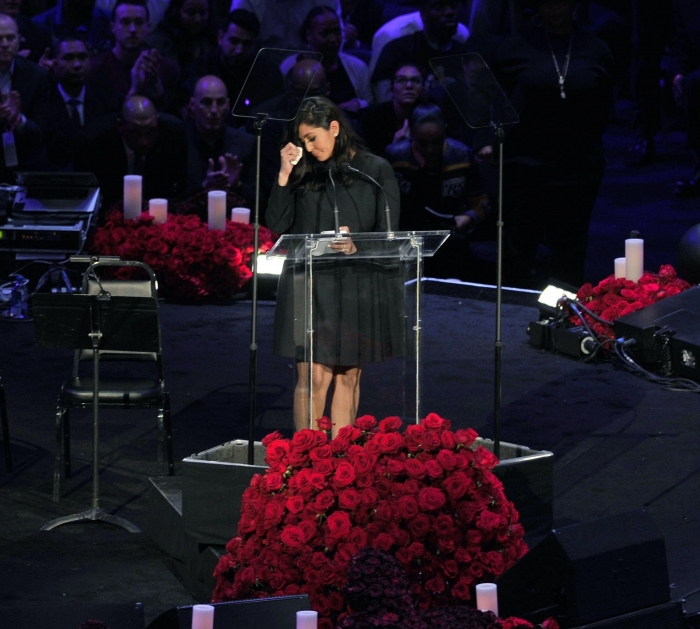 Vanessa Bryant is expressing dismay and anger over reports that some Los Angeles County sheriff’s deputies took photos of the remains of Kobe Bryant and other victims at the scene of the helicopter crash that killed Kobe Bryant and eight others in Calabasas.

A note written by an attorney representing Bryant’s widow and posted on Vanessa Bryant’s Instagram page says that Bryant specifically asked sheriff’s officials on the day of the crash to declare the area a no-fly zone to guard against photographers trying to cash in on the tragedy.

“At that time, Sheriff Alex Villanueva assured us all measures would be put in place to protect the families’ privacy and it is our understanding that he has worked hard to honor those requests,” the letter states.

“First responders should be trustworthy. It is inexcusable and deplorable that some deputies from the Lost Hills Sheriff’s substation, and other surrounding substations and the Los Angeles County Fire Department would allegedly breach their duty,” said Gary Robb, attorney for Vanessa Bryant.

“This is an unspeakable violation of human decency, respect, and of the privacy rights of the victims and their families. We are demanding that those responsible for these alleged actions face the harshest possible discipline, and that their identities be brought to light … we are requesting an Internal Affairs investigation of these alleged incidents.”

Some deputies were ordered to delete any photos taken at the scene and told that doing so would clear them of any discipline, the Los Angeles Times reported Thursday.

The order was given in the days after Jan. 26 crash into a Calabasas hillside during a meeting at the sheriff’s Lost Hills Station in Malibu and came after a complaint was filed that a deputy was showing the images to others at a bar in Norwalk, according to public safety sources who spoke on condition of anonymity to the newspaper.

The complaint was sent to the Sheriff’s Information Bureau. The head of the bureau, Capt. Jorge Valdez, told The Times on Wednesday he was not aware of the complaint and “there was no order given to delete any photographs.”

Sources told The Times Friday that Valdez was among those who handled the complaint.

TMZ reported deputies and members of the Los Angeles County Fire Department had taken and shared the photos.

`Law enforcement sources tell TMZ, multiple L.A. County Sheriff’s deputies who responded to the crash scene took photos that included remains. We’re told one of the deputies — a trainee — took photos and at some point went to a bar and, as one source put it, `He tried to impress a girl by showing her the photos.’ We’re told the bartender overheard the conversation and filed
an online complaint with the Sheriff’s Dept.

“We’re also told the cellphone photos were passed around at the Lost Hills Sheriff’s substation — the first responders to the crash. Sources say deputies from other substations around L.A. County also took cellphone photos.”

In a statement issued by the department Friday, Villanueva said he was “deeply disturbed at the thought deputies could allegedly engage in such an insensitive act.”

Villanueva went on to pledge in the statement that “a thorough investigation will be conducted by the department, with the No. 1 priority of protecting the dignity and privacy of the victims and their families.”

It’s unclear how many people saw or received the photos without authorization, The Times reported.

The sharing of photos of the crash scene and the victims’ remains was the topic of a discussion among first responders two days after the crash, a public safety source with knowledge of the events told The Times. The source said he saw one of the photos in a setting separate from the crash’s investigation.

Brian Williams, executive director of the Civilian Oversight Commission, told The Times sheriff’s department officials would be questioned next week.

The Association for Los Angeles Deputy Sheriffs, the union that represents deputies, said Friday “as with all investigations, we will aggressively represent our members and preserve their rights.”

The sheriff’s department and other Los Angeles-area law enforcement agencies have struggled with keeping confidential information in high-profile cases from being shared in the past.