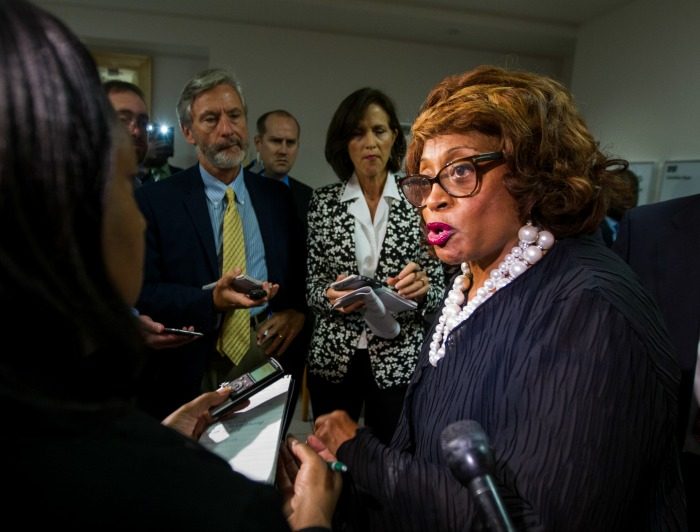 In this Aug. 13, 2015 file photo, Rep. Corrine Brown, D-Fla. talks with the press in Tallahassee, Fla. Brown has been indicted after a federal investigation into a fraudulent charity with ties to the congresswoman. (AP Photo/Mark Wallheiser, File)

JACKSONVILLE, Fla. (AP) _ U.S. Rep. Corrine Brown of Florida and her chief of staff pleaded not guilty Friday to multiple fraud charges and other federal offenses in a grand jury indictment unsealed after an investigation into what prosecutors call a phony charity turned into a personal slush fund.

She has represented a Jacksonville-based congressional district since 1993 _ one of the first three African-Americans elected to Congress from Florida since Reconstruction_ and is seeking re-election in a newly redrawn district. Later Friday, Brown released a statement saying she was temporarily stepping down as ranking member of the House Committee on Veterans’ Affairs, in accordance with House rules.

House Democratic leader Nancy Pelosi, who called the charges against Brown “deeply saddening,” said that for more than two decades “Brown has served her constituents in Florida with passion and energy. She has been a champion for America’s veterans.”

The 24-count indictment comes after an investigation into the purported charity One Door for Education Foundation Inc., which federal prosecutors say was billed as a way to give scholarships to poor students but instead filled the coffers of Brown and her associates.

After the hearing, Brown predicted she would be cleared at trial. She was surrounded by supporters outside the courthouse, some carrying signs. One read, “Justice or else. Corrine matters.”

“My heart is just really heavy. But I’m looking forward to a speedy day in court to vindicate myself,” Brown said. “We will present the other side.”

Brown and Simmons, of Laurel, Maryland, were both released on $50,000 bail and ordered not to travel outside the U.S. A status hearing was set for July 26. Simmons, who has been Brown’s chief of staff since 1993, declined comment after the hearing.

Earlier this year, One Door President Carla Wiley pleaded guilty to one count of conspiracy to commit wire fraud after it was determined that she had deposited $800,000 into the foundation’s account over four years. Over that time, federal prosecutors say it gave one scholarship for $1,000 and $200 to an unidentified person in Florida, while Wiley transferred herself tens of thousands of dollars.

“Congresswoman Brown and her chief of staff are alleged to have used the congresswoman’s official position to solicit over $800,000 in donations to a supposed charitable organization, only to use that organization as a personal slush fund,” Assistant U.S. Attorney General Leslie Caldwell, chief of the Justice Department’s criminal division, said in a statement.

The indictment says that Brown, Simmons and Wiley “used the vast majority” of One Door donations for their personal and professional benefit, including tens of thousands of dollars in cash deposits that Simmons made to Brown’s personal bank accounts.

According to the indictment, more than $200,000 in One Door funds were used to pay for events hosted by Brown or held in her honor, including a golf tournament, lavish receptions during an annual Washington conference and the use of luxury boxes for a Beyonce concert and an NFL game between the Washington Redskins and Jacksonville Jaguars.

One Door money was also used for such things are repairs to Brown’s car and vacations to locations such as the Bahamas, Miami Beach and Los Angeles. In addition, House of Representatives money was used to pay a “close family member” of Simmons identified as “Person C” more than $735,000 between 2001 and 2016 for a job in Brown’s office that involved little or no work, according to the indictment. Simmons allegedly benefited from some of that money.

“Our office is committed to ferreting out and prosecuting all forms of corruption and fraud, regardless of who the offender is,” said U.S. Attorney A. Lee Bentley. “In our nation, no one is above the law.”

Documents previously obtained by The Associated Press from Orlando Mayor Buddy Dyer’s office show that he received an invitation bearing the seal of the House of Representatives to a July 13, 2013 golf tournament called the “Corrine Brown Invitational.” It was sponsored by the One Door organization and coincided with a freight and rail industry symposium in Jacksonville.