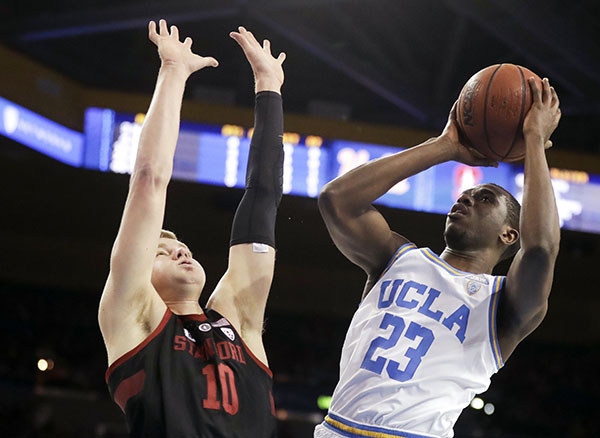 It was on a fast break in the second half when UCLA’s freshman guard Jaylen Hands decided to replicate a pass he used to do in high school, knowing he would face consequences if it indeed in fact failed horribly.

Thankfully, Hands’ between-the-legs pass to Kris Wilkes worked to perfection, as a packed crowd of 10,519 erupted inside Pauley Pavilion, while the Bruins (15-7, 6-4 Pac-12 Conference) went on to throttle Stanford (11-11, 5-4 Pac-12 Conference) in a pivotal 89-73 win over the Cardinal Saturday evening.

“I got the rebound, and I saw Kris running and I remember I had a lot of space, so I was just like, `I’ve got to do something crazy,’” Hands said. “I didn’t know what to do and it just came into my head.”

Aaron Holiday led the Bruins with 21 points and eight assists, while Wilkes finished with 18 points, on a very efficient night, converting 6 for 7 shots in the game.

Hands was just one point away from recording a double-double with adding nine points and 10 assists, while Prince Ali chipped in with 16 points, respectively.

“I’m just trying to do my best to knock down the shots that they find for me,” said Thomas Welsh who recorded his 13th double-double of the season with 13 points and 10 rebounds.

“It’s really a pleasure. They’re incredible guards to play with.”

Bruins coach Steve Alford knew it was a risky decision by his freshman guard to throw such a pass, especially as Hands took a questionable jump shot just before on their previous possession, but all he could do was enjoy the moment.

“It’s Hollywood,” Alford said. “I liked that. I’m glad that was very successful, by the way … they were having fun. We try to tell them when we get these stops its fun, because now we get out and run. We’re a good transition team.”

Ali also enjoyed the flashy-pass and jokingly whispered to Hands that he was fortunate that the play worked out.

UCLA got out and ran the lanes throughout the game, forcing the Cardinal into 13 turnovers while holding them to 30 percent from three-point distance and 40 percent overall through 20 minutes of play.

“Our emphasis going into this game was our defense, that was something we did a better job at,” added Welsh.

Stanford defeated UCLA in double overtime (107-99) when the two programs faced off at Stanford on Jan.4, so revenge was freshly on the table for the Bruins. 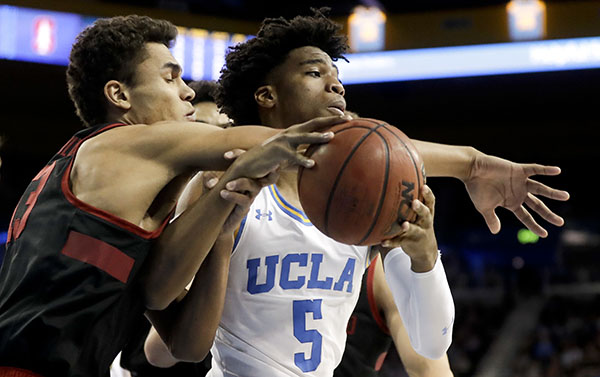 “We were hyped up to play this game, they beat us in double overtime last time so we were pumped up and thought we owed them this one,” added Ali.

The Bruins started the game catching fire from behind the three-point arc, as their first four baskets were all  three-point baskets, one each by Ali and Hands and two by Wilkes.

The Cardinal found themselves down 49-36 at the half, after a 14-0 run by the Bruins, as Stanford freshman guard Daejon Davis knew his team lacked necessary energy that was needed.

“I felt we could’ve competed harder,” Davis said after finishing the night with a career-high 23 points. “Coach told us it was going to be a dog fight. We knew that when we took care of business at home, these two (road) games were going to be tough. We just lacked the competitive edge that we had in our five-game winning streak. I just felt like they really got out in transition. Also, on defense, I felt we were one step slow.”

Stanford got off to another slow start in the second half, as the Bruins took advantage of 22-13 run, capped off by Hands pass to Wilkes, that boosted their lead to 71-49 with 11:40 still left to play.

Just four minutes prior to UCLA’s largest lead of the game, Wilkes threw down a windmill dunk on a fast break that had Pauley Pavilion buzzing.

“I thought it was good; he got the ball and me and Prince were ahead of him,” Hands said, laughing.

Then I was like yeah I’m not getting [the ball] so I was just was hoping he did something cool so that was dope.”

The Bruins ultimately made 52.8% of their shots and 52.6% of their three-pointers, on a night where UCLA’s 1967-68 national championship team was in attendance, featuring Kareem Abdul-Jabbar sitting courtside.

“It’s incredible, it’s one of the reasons why players like me and others, are drawn to play at a school like this, it’s such a honor to wear these four letters across my chest,” said Welsh.

“We have two of the best bigs [centers] to ever play the game walking through the gym. I mean it’s a pretty special environment, I’m just trying to do my best to follow in their footsteps.”

UCLA now prepares to host their crosstown rivals in USC (17-6, 8-2 Pac-12) Saturday at Pauley Pavilion, 3 p.m., as the Trojans are just a half game behind Arizona for first-place, while the Bruins are inching closer to the top, tied for third place with Washington (15-6, 5-3 Pac-12).