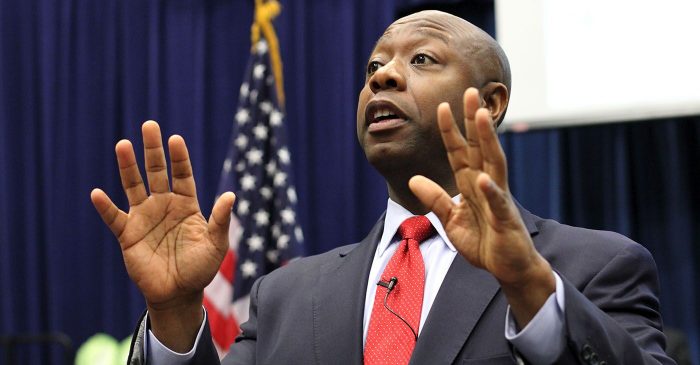 In a blistering op-ed in The Washington Post, Senator Tim Scott, the U.S. Senate’s only African American Republican, took the Republican Party to task on the issue of racism. (Courtesy photo)

Stating what has become even more of an issue for the GOP during the presidency of Donald Trump, Sen. Tim Scott, wrote, “We are often still struggling when it comes to civility and fairness. This was driven home once again Thursday as Rep. Steve King (R-Iowa) wondered aloud: “White nationalist, White supremacist, Western civilization — how did that language become offensive?”’

In a blistering op-ed in The Washington Post, the U.S. Senate’s only African American Republican, took the Republican Party to task on the issue of racism. Sen. Scott has been openly reluctant to support Donald Trump.He notably skipped the Republican National Convention in 2016.

On January 10, Republican Rep. Steve King of Iowa wondered out loud when the term “White supremacists” became a negative during an interview with The New York Times.

“White nationalist, White supremacist, Western civilization — how did that language become offensive?” King said during the interview.In a familiar pattern, Rep. King sought to “clarify” his comments a day later. But the U.S. Representative has a long history of comments that can easily be defined as racist.

“I want to make one thing abundantly clear; I reject those labels and the evil ideology that they define. Further, I condemn anyone that supports this evil and bigoted ideology which saw in its ultimate expression the systematic murder of 6 million innocent Jewish lives,” Rep. King said on January 11.

In July 2013, King said of Mexican immigrants that, “For every one who’s a valedictorian, there’s another 100 out there who weigh 130 pounds—and they’ve got calves the size of cantaloupes because they’re hauling 75 pounds of marijuana across the desert.”

Rep. King displayed the Confederate flag on his office desk in 2016 removing it later after a Confederate flag-waver shot two law enforcement officers in Iowa. In March 2017, he wrote “culture and demographics are our destiny. We can’t restore our civilization with somebody else’s babies” and, “you need to teach your children your values” and “with the inter-marriage, I’d like to see an America that is just so homogenous that we look a lot the same.”

Rep. King’s words are familiar to that of the rhetoric of David Duke and Richard Spencer and other prominent white supremacists.Though he was been criticized by Speaker Paul Ryan for his past comments, many Republicans have remained silent during Rep. King’s racial controversies.

Sen. Scott has become tired of that practice.

Sen. Scott cataloged recent racist incidents in the U.S. saying, “Three months ago, a white supremacist killed two black people in a parking lot in Kentucky. We are only 18 months from Charlottesville, where white nationalists killed a White woman with a car and severely beat multiple Black people. Almost four years ago, a White supremacist murdered nine African Americans in a church in Charleston, S.C. In 1998, White supremacists dragged James Byrd Jr., behind a pickup truck through Jasper, Tex., decapitating him in the process.”

“I will admit I am unsure who is offended by the term “Western civilization” on its own, but anyone who needs “white nationalist” or “white supremacist” defined, described and defended does lack some pretty common knowledge,” Sen. Scott continued.

“When people with opinions similar to King’s open their mouths, they damage not only the Republican Party and the conservative brand but also our nation as a whole,” Sen. Scott continued.

The backdrop of Rep. King’s latest racially-motivated comments is President Trump’s insistence on building a wall at the border of Mexico. Trump ran on a platform that defined Mexican immigrants as violent and dangerous.Noteably, after white supremacists marched with torches in Charlottesville, Va., President Trump was not only slow in denouncing their message but declared that — “both sides” — were “violent.”