In this Thursday, May 19, 2016 photo, Judith Bryant, a great-great-grandniece of Harriet Tubman, poses with photos of Tubman and other family members at her home in Auburn, N.Y. Bryant’s great-great grandfather was Tubman’s brother, and was among the dozens of slaves she guided north to freedom. Tubman had been free for a decade in 1859, when she bought a parcel of land on the outskirts of Auburn, about 25 miles west of Syracuse. (AP Photo/Mike Groll)

AUBURN, N.Y. (AP) _ Harriet Tubman’s upcoming debut on the $20 bill is just half the good news in the upstate New York town where the Underground Railroad conductor settled down and grew old.

A long-sought national historical park here honoring Tubman could be officially established as early as this summer. The move would give a boost to preservation efforts at her old home and church just as the former slave is poised to replace President Andrew Jackson as the face of the $20 bill.

“It’s about time,” Judith Bryant, Tubman’s 80-year-old great-great-grandniece said of the recognition as the first African-American on U.S. paper currency. “People who don’t know about her will now.”

Bryant stood beside a simple headstone describing Tubman as a “Heroine of the Underground Railroad,” a phrase that resonates personally with the Auburn resident. Bryant’s great-great grandfather was Tubman’s brother, and was among the dozens of slaves she guided north to freedom.

Tubman had been free for a decade in 1859, when she bought a parcel of land on the outskirts of Auburn, about 25 miles west of Syracuse. She was given a good deal by fellow abolitionist Sen. William Seward, who would later become President Abraham Lincoln’s secretary of state. She settled long-term in the area after the Civil War, during which she served as a spy, a scout, a cook, a nurse and, famously, as a leader in a military raid.

She married for a second time, spoke out for women’s suffrage, grew potatoes and apples, took in boarders and continued to spend her time and scarce money helping others. She was able to establish a home for the aged next door to her house before she died in 1913. Accounts of her age at death vary, though most put it between 91 and 93.

Tubman had family in the area and some latter-day relatives still live in the small city in the Finger Lakes region, like Bryant and 88-year-old great-great grandniece Pauline Copes Johnson.

Johnson had spent decades traveling around the country “keeping Aunt Harriet’s name alive.” Now she can take pleasure in the new $20 bill, the national park and a planned TV biography under development starring Viola Davis.

“I’m so glad that at last she’s being recognized,” she said. 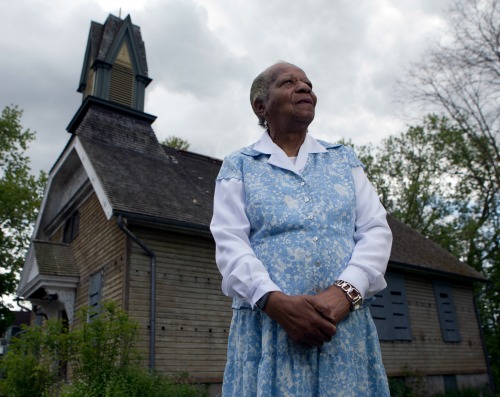 In this Thursday, May 19, 2016 photo, Pauline Copes Johnson, a great-great-grandniece of Harriet Tubman, poses outside the Thompson A.M.E. Zion Church in Auburn, N.Y. The Harriet Tubman National Historical Park would encompass that 31-acre site plus the A.M.E. Zion Church about a mile away where Tubman worshipped. The weathered clapboard church is boarded up now and offers sanctuary only for neighborhood birds. (AP Photo/Mike Groll)

Tours of Tubman’s property are now run by the not-for-profit Harriet Tubman Home. The old brick house is closed for remodeling, but visitors can visit an interpretive center and walk through the home for the aged, where she died.

“This is the only place for nearly five decades where we can document Tubman’s comings and goings,” said the group’s president, Karen Hill. “That’s huge, to know that we can actually stand on the soil that she tilled.”

The Harriet Tubman National Historical Park would encompass that 31-acre site plus the A.M.E. Zion Church about a mile away where Tubman worshiped. The weathered clapboard church is boarded up now and offers sanctuary only for neighborhood birds.

The transition to a national park is complicated, involving two parcels of land and the purchase of a historic easement on the larger property. The park could be formally established this summer once the church land is sold. Parks officials say they will then work with the Harriet Tubman Home and the church to improve the site. Hill looks forward to having the house reopened and bringing back Tubman’s apple orchard and more.

The design of the new $20 bill with Tubman on the front is expected to be completed by 2020.

Bryant said the idea of pulling a bill from her pocket with her ancestor’s image on it is still unimaginable. But she already appreciates the effect the ancestor who died before she was born had on her life. Not only did Tubman lead her family here, Bryant’s home on a quiet Auburn street was built by Tubman’s nephew, her great grandfather, and his son.

“Sure I’m proud to have a famous ancestor, but not because she’s famous, because of what she did and what she meant to my family. … I wouldn’t be in Auburn, New York. I would not be in this house,” she said. “I wouldn’t be who I am.”