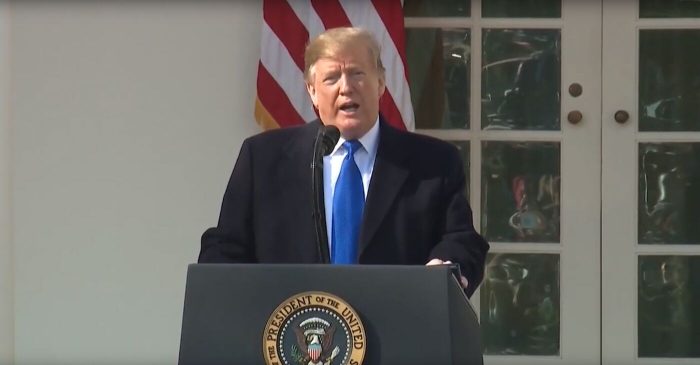 On Friday, 2-16-2019, the president signed a bi-partisan bill to keep the government open, but he also declared a national emergency on the border with Mexico. (Courtesy photo)

Many Americans think President Donald Trump is not competent enough to be one of the most powerful men on the planet, but he is. Many think he is a double agent with the Russians, but they cannot prove it. Others think he has mental health issues, but he is still their boss, and the leader of the free world.

President Trump is the Teflon King, and everyone expects a lie when he speaks, and he does not care what anyone thinks or says. He lives in an alternative reality with his base, and facts and data are not relevant or important.

On Friday, 2-16-2019, the president signed a bi-partisan bill to keep the government open, but he also declared a national emergency on the border with Mexico.

“We’re going to confront the national security crisis on our southern border, and we’re going to do it one way or the other. It’s an invasion. We have an invasion of drugs and criminals coming into our country,” says the president in a televised statement in the Rose Garden.

“Look, I expect to be sued,” he said, launching into a mocking riff about how he anticipated lower court rulings against him would pan out. “And we’ll win in the Supreme Court.”

As the Democrats sound the alarm, and condemn the president for his decisions, President Trump is in Florida playing golf. The Trump reality is in real time, and the only response to his insanity is to resist, push-back, and fight. This is a make believe emergency, another Trump scam or con game, and there appears to be a big legal battle brewing.

Trump does not really believe there is national emergency at the border, but his base needs red meat to be engaged in the political system. They are organized, motivated, and they have a leader who is protecting their guns and ideology. For America to be great again, White people must be in charge again.

Our president’s technique is to spin fiction into fact, even though illegal crossings have plummeted last year to around 400,000, from 1.6 million in 2000.

“The number of illegal immigrants in the United States has been falling for more than a decade and two-thirds of those who remain have been here for more than a decade. An estimated 10.7 million unauthorized migrants were in the country in 2016, and there were 1.5 million fewer than in 2007,” according to the Pew Research Center.

Among unauthorized migrants in fiscal 2017, about twice as many entered the United States legally, and overstayed their visa. Based on the numbers and data, there appears to be no national emergency, but things could get tricky, and maybe the president and his legal team could win in the lower courts.

The national emergency is all about the “Benjamin’s” and President Trump’s team will be searching under rocks and using pentagon money to build his wall. It appears that the bipartisan language used in the State of the Union Address is no longer applicable after one week, between the President, the Democrats, and the Republicans.