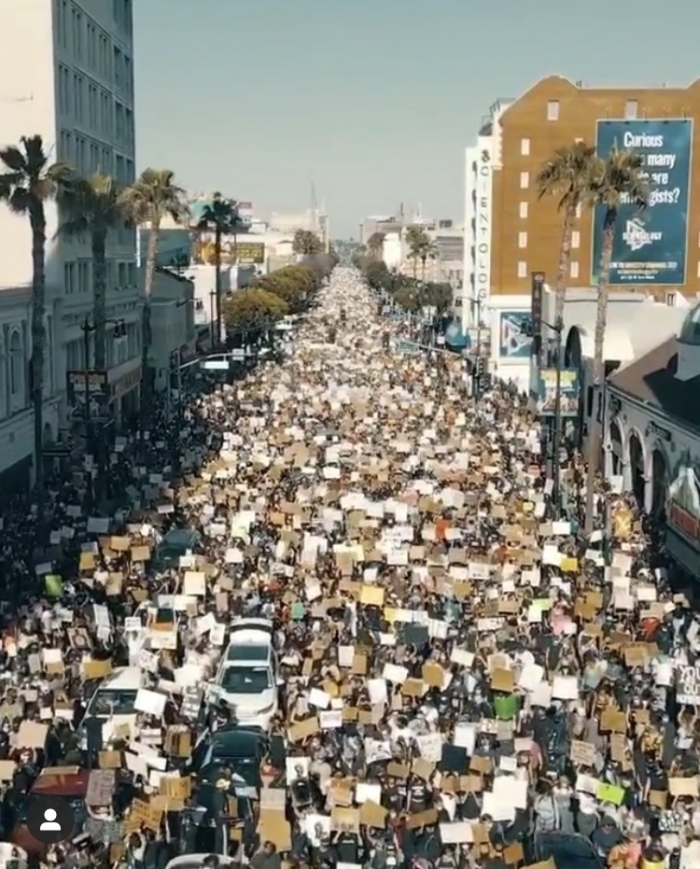 Thousands took to the streets of Los Angeles this past weekend, and into the early part of this week, marking the 14th consecutive day of protests sparked by the May 25 killing of George Floyd by Minneapolis police. (Photo by Yakooza)

Thousands took to the streets of Los Angeles this past weekend, and into the early part of this week, marking the 14th consecutive day of protests sparked by the May 25 killing of George Floyd by Minneapolis police.

More than 30 protests, marches and vigils were held throughout the Southland, from Venice to Huntington Beach and Beverly Hills to Fullerton, in remembrance of Floyd and to call attention to police abuse in general, and the momentum does not appear to be slowing down any time soon.

Monday opened the week with thousands of people participating in a symbolic funeral procession for Floyd and local victims of police shootings consisting of four separate processions. The lead hearse led an assembly of vehicles from Leimert Park to 1st and Broadway Streets for a noonday funeral service, where it joined with processions from Long Beach, Reseda and Orange County also led by hearses.

“We’ve become complicit in our silence and it’s time that the church is not just saying, we’re not racist, but that we are anti-racist and we have to actually be active; we have to be intentional about it,” said Pastor Dave Gibbons of Santa Ana-based Newsong Church.

Melina Abdullah, professor of Pan African studies at Cal State Los Angeles and a co-founder of BLM-LA, both praised and challenged the ministers assembled.

“It’s really important that we are here on one accord; that we understand what it is we are here for. And while we have clergy who have been in this work from the beginning …  who are not afraid to stand alongside us, go to jail with us … we also know that there are clergy that are new to this work.  I heard clergy talking about how we need to be reasonable with police … last week there were clergy kneeling with police,” said Abdullah.

She continued, “We know that the best of Black Christianity is about freedom struggle. You cannot claim to be a Christian and then bow down to white supremacy. So, I’m putting it before you right now: that any hope you had of using this moment to cozy up to power, that you release that from your spirit.”

The largest protest event to date jammed Hollywood Blvd. on Sunday, June 7, with between 50,000 and 100,000 people. The afternoon march and rally was organized by BLM-LA, rap artist YG and BLD PWR, an organization that encourages athletes and entertainers to use their status and platforms for social justice causes. 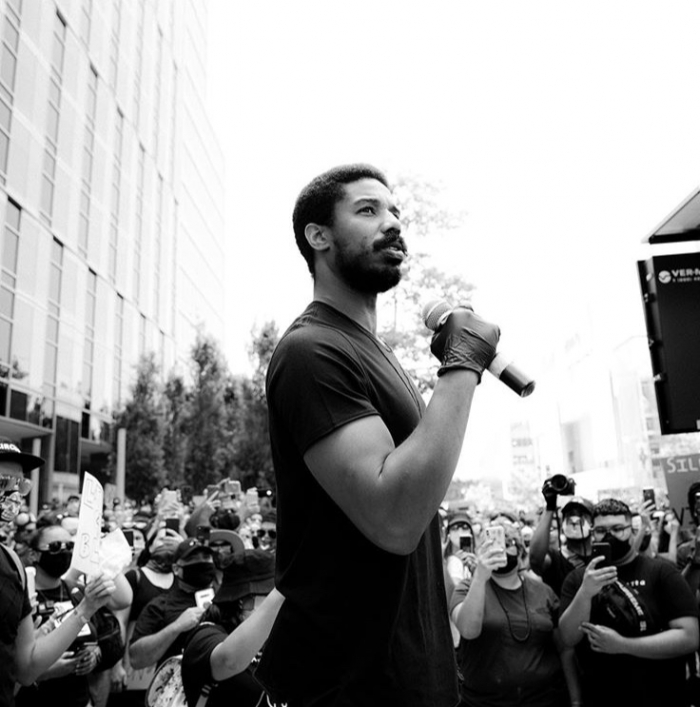 Michael B. Jordan (Photo by Yakooza)

While police initially put the estimated attendance at 20,000 people, a subsequent tweet stated 50,000 attendees. BLM-LA organizers however stated the processional, which included vehicles, stretched for 10 miles and reached a total of 100,000 people as it wound its way through the heart of Hollywood, culminating at the intersection of Hollywood Blvd. and Highland Ave. with speeches, chants, music and dance.

Earlier in the day, an estimated 400 vehicles traveled from Compton, along Central Avenue, to LAPD headquarters at 1st and Main Streets to protest both Floyd’s death and local police acts of brutality. The caravan, organized by Union del Barrio, the Harriet Tubman Center for Social Justice, and a host of other organizations, began the procession at Greenleaf Cemetery with a flower laying ceremony at the grave of Alprentice “Bunchy” Carter.

Carter was the founder and chairman of the Southern California chapter of the Black Panther Party for Self-Defense (BPP). The BPP begun in Oakland in 1966, and was most famous for its fight against police brutality. In January of 1969 Carter, along with fellow Panther John Huggins, was murdered on the campus of UCLA.

Cars weren’t the only things cruising through the streets of Compton this past Sunday. More than 1,500 people wound their way through the streets to a rally at Compton City Hall. The protestors were led by motorcyclists and trailed by the Compton Cowboys, an inner city equestrian unit that brought out dozens of Black cowboys and cowgirls from the area and other parts of Southern California.

Sunday also saw Mayor Garcetti announce that National Guardsman dispatched to the city after protests turned violent last week, will scale down their numbers. According to the mayor, “a small number of units” would remain in the city through Wednesday to provide emergency support if needed.

Bikes over Banging brought hundreds of runners, cyclists and motorcycle riders from different parts of Southern California to Leimert Park for a rally against police abuse on Saturday. 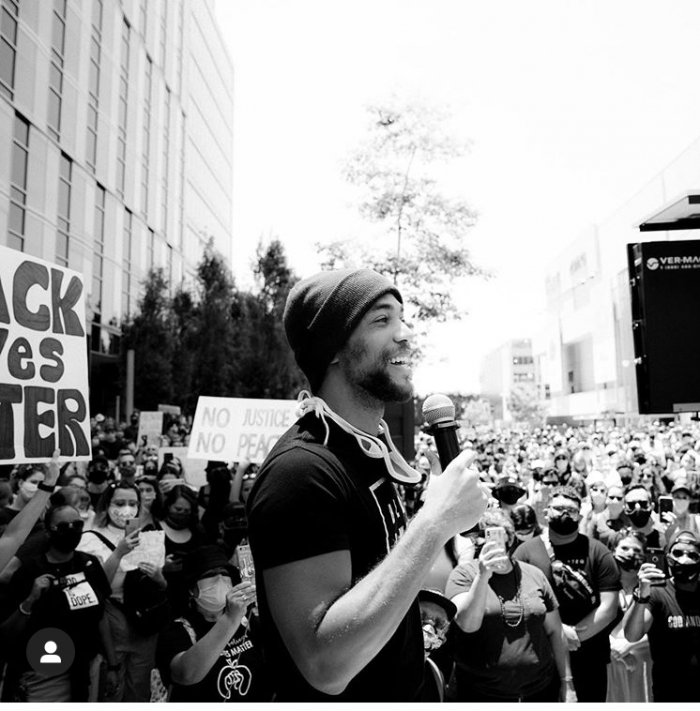 Despite the massive size of the weekend’s protests in Los Angeles, acts of violence by protestors, the presence of large numbers of riot police and violence attributable to police was negligible.

Here in Los Angeles, Mayor Eric Garcetti lifted the City’s curfew after a lawsuit brought by the ACLU and BLM-Los Angeles charged that it violated Angelenos’ rights to peacefully assemble. The suit was specifically brought on behalf of the 2,600 people arrested during the prior weeks’ protests mainly due to curfew violations or failure to disperse orders.

Both City Attorney Mike Feuer and Los Angeles County District Attorney Jackie Lacey have announced that they will not charge those protestors.

The lack of violence – by both individual protestors and police – seemed to vindicate national calls by activists to “defund the police.”

According to demands put forth by The People’s  Budget-Los Angeles, at least 50 percent of the general fund budget for the City of Los Angeles has consistently gone to LAPD. The group believes that funding would be better spent investing in “care not cops”. Fifty-four percent of the proposed budget for this year had been earmarked for LAPD; however, Mayor Garcetti announced last week that $150 million of the proposed $1.86 billion to the department would to reinvest in communities. 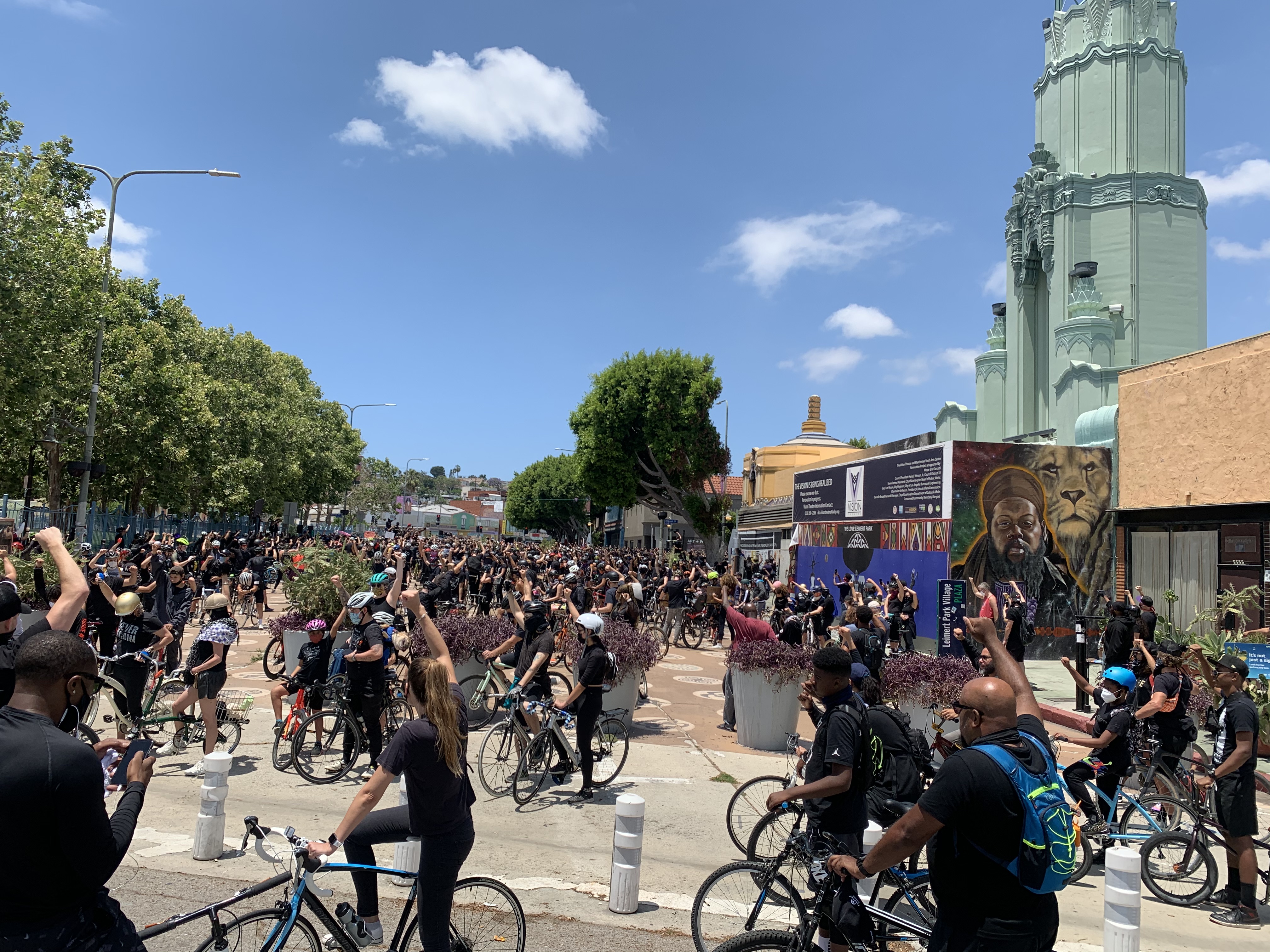 Bicyclists unite in solidarity at a rally/demonstration in Leimert Park. (LAPD Courtesy Photo)

An update posted on The People’s Budget website said the group was encouraged and considered it a victory that the cuts would be used to reinvest in disadvantaged communities, but cautioned that much more was necessary since the $150 million figure would still leave LAPD with 51% of their budget intact.

In Minneapolis, the city where a George Floyd died at the hands of police, nine of the 13 members of the city council voted over the weekend to disband – not simply defund – the city’s police department.

Floyd was laid to rest on Tuesday, June 9, in Houston, Texas. Its reported that boxing champion, Floyd Mayweather, Jr. paid the funeral costs. Leonard Ellerbe, CEO of Mayweather Promotions confirmed the boxer’s involvement in a statement to ESPN. “He’ll probably get mad at me for saying that, but yes, (Mayweather) is definitely paying for the funeral,” Ellerbe said.

Jeremiah Ellison, city councilman and son of Minnesota Attorney General Keith Ellison, tweeted “We are going to dismantle the Minneapolis Police Department. And when we’re done, we’re not simply going to glue it back together, we are going to dramatically rethink how we approach public safety and emergency response. It’s really past due.”

The call to “abolish the police” isn’t quite that loud in Los Angeles; however, activists here and elsewhere will be keeping an eye on Minneapolis in the coming weeks and months. 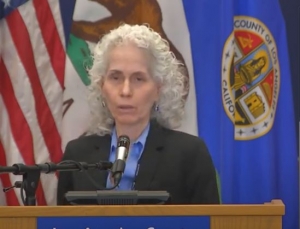