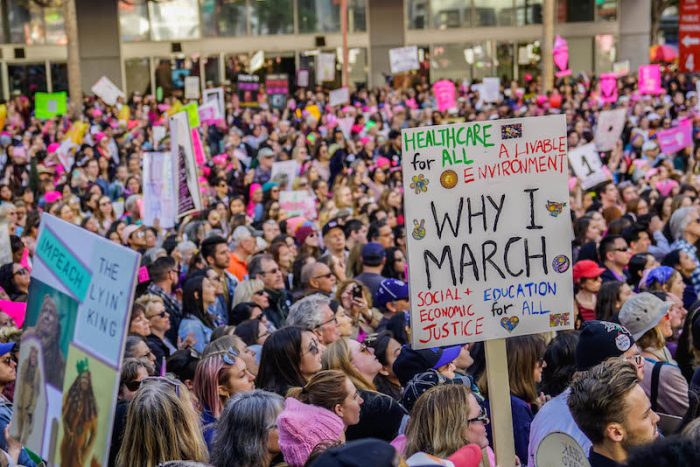 Elle White, (Middle) an advocate with the Women’s March joins thousands of demonstrators gather at Pershing Square for the Women’s March in Los Angeles on Saturday, Jan. 19, 2019. (Kristina Dixon for Sentinel)

Thousands filled the streets of downtown Los Angeles Saturday, January 19, to join the rest of the country in the third annual Truth to Power Women’s March. Both men and women filled the streets with picket signs that decried a variety of issues including immigration, the government shutdown and most notably women’s health and financial rights. Organizers of the march, The Women’s March Los Angeles Foundation, are urging voters to come out in droves for the next election.

The march began at Pershing Square with a prayer and blessing from members of the Tongva Nation, to acknowledge missing indigenous women. Participants then trekked from the square to the steps of L.A. City Hall. There, as the day grew warmer, some still holding picket signs, listened to keynotes and enjoyed food from random vendors, while others ventured off to other parts of the area to start their own chants and rallies. Marchers were also treated to performances, one singer getting the crowd to join her in the classic women’s empowerment anthem, “You Don’t Own Me.”

“We come with demands for justice, for equity. We come today peaceably, but we also come to fight,” actress LaVerne Cox told the crowd at city hall.

Mayor Eric Garcetti also addressed the crowd, using his platform to state the urgency of justice for women in both public and private sectors.

“We need to step up in our board rooms … to make sure women aren’t just given lip service but are given power,” Garcetti said.

“We want gender equity now, in Los Angeles and across the country.”

Added, Jennifer Newsom, wife of California Governor Gavin Newsom who spoke mainly about economic justice and diversity in various employment sectors, “Women matter. Our voices are important and valuable. Our experiences are unique.”

“For us, ‘Truth to Power’ is holding those who are put in office accountable,” said co-organizer Emiliana Guereca said of this year’s theme.

Organizers faced criticism of their last two events for not being inclusive and only open to “heterosexual cisgender white women.” They also expected a decline in numbers amid whispers of anti-Semitism. One of the organizers was said to have a relationship with Minister Louis Farrakhan of the Nation of Islam.

This year, a variety of speakers hit the stage including those from the LGBT community. Meanwhile, Guereca and her fellow organizers are hoping that themes from this year’s march carry over beyond Saturday.

“We don’t want people to just march and go home and that’s it,” she said.

“We want to make sure that they’re plugging into civic engagement. That’s key.” 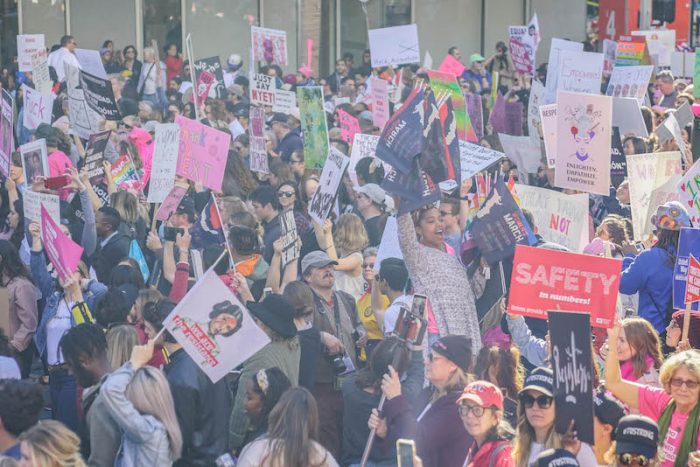 Throughout the year the group works registering voters and hosting training sessions for future gatherers. At these meetings, they aim to educate the public on how civic engagement affects women and youth specifically. They also partner with and help other organizations and causes, such as March for Our Lives, Time’s Up, and the Cancel Kavanaugh campaign.

“I felt hopeful after the first march,” Guereca told reporters.

“I felt like, OK, if we can get all of these people in the streets and we can get them to vote, we’re gonna be OK. If we continue on [this] trajectory, our government will start to look like what our society looks like.”

During the afternoon rally a Trump balloon portraying the current president in diapers, with the message “baby Trump” floated over the crowd, a theme that was apparently common among marches across the country.

“It’s been a tumultuous year and we are marching to show our elected representatives that we are holding them accountable for every imprint they make on our democracy,” organizers said via a statement before the march.

“Women are rebuilding our democracy to once again represent We The People, one marcher at a time. Our democratic system only works when we participate and when we hold politicians accountable.

“This is an inclusive, non-partisan march, and everyone who supports women’s rights is welcome. Whether it will be your first march or you are one of the 1.5 million participants who joined us in 2017 and 2018, we need you to march on January 19th! The march will raise awareness of the important work done by community organizations throughout the year registering and educating voters, mobilizing communities, equipping youth for civic engagement and empowering women to run for office.”

The march was part of a larger effort across the country, and started the year President Donald Trump was sworn into office.