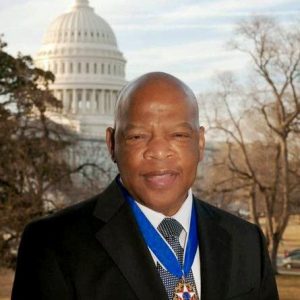 I’ve been waiting to see this day for 15 years — and in some ways, my whole life.

I’ve loved history ever since I was a little boy. Growing up in the oppressive shadow of Jim Crow, my teachers would ask me to cut out photographs I found in magazines and newspapers of Rosa Parks, George Washington Carver, and other marchers for justice. I read about Booker T. Washington, reveled in the sounds of the Jubilee Singers, and prayed for a King to reach the mountaintop.

To me, history is the foundation of a powerful legacy, and it is important to tell the stories of the millions of black men and women, boys and girls, who labored and sacrificed, and continue the struggle, to build this great nation.

When I learned of the decades-long effort to establish a national museum dedicated to preserving that too often untold story, I readily joined the effort. Every session of Congress for 15 years, I introduced a bill to create this national museum.

While the journey has been long, today the history of African Americans will finally take its place on the National Mall next to the monuments to Washington, Lincoln, and Jefferson — exactly where it belongs.

It is important that the National Museum of African American History and Culture tells the unvarnished truth of America’s history — a story that speaks to the soul of our nation, but one few Americans know.

It’s a reminder that 400 years of history can’t be buried; its lessons must be learned. By bringing the uncomfortable parts of our past out of the shadows, we can better understand what divides us and seek to heal those problems through our unity.

If we look at the glass-topped casket that displayed the brutalized body of Emmett Till and hear his story, we may better understand the exasperation and anger Americans feel today over the deaths of Trayvon Martin or Tamir Rice.

If we see that an everyday leather wallet is what’s left of Harry T. Moore — a man who fought for the right to vote and died in a bombing meant to silence his activism on Christmas Day in 1951 — perhaps we will see why so many are fighting to protect any encroachment on that most sacred right today.

And as we look at the exhibit dedicated to an African American who now leads the free world from a White House built by black slaves, we can better understand the unshakeable optimism that has defined his belief that — with dedicated work and a little good trouble — we can help create a society that is more fair and more just, which benefits all Americans.

This museum casts a light on some of the most inspiring — and uniquely American — heroes who were denied equal rights but often laid down their lives to defend this nation in every generation. Often they profited least from the struggle they were willing to die for because they believed that the promises of true democracy should belong to us all, equally and without question.

I hope you will join me and President Obama for the opening ceremony of the National Museum of African American History and Culture today at 10:00 am ET.

When you hear about the heroes memorialized in its halls, you may discover the depths of the invincible American spirit. As we learn and confront this history together, we can begin to build one inclusive, and truly democratic family — the American family.