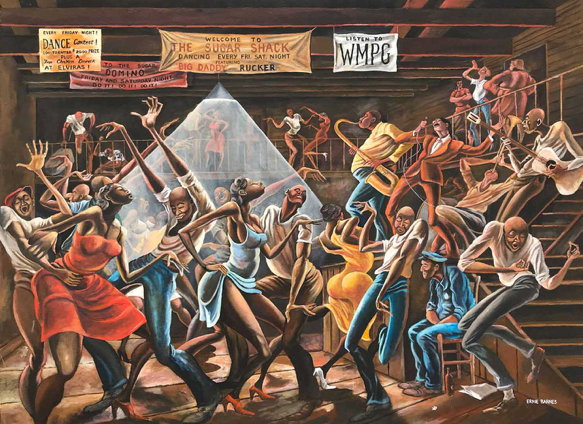 The California African American Museum (CAAM) announced today that it will present an exhibition that examines the life, art, and popularity of Ernie Barnes, who created some of the twentieth century’s most iconic images of African American life. Ernie Barnes: A Retrospective will be on display from May 8–September 8, 2019.

George O. Davis, executive director of CAAM said, “We are honored to present the work of Ernie Barnes and to tell the fascinating life story of this artist and athlete. He was a child of the segregated south who came to call Los Angeles home.”

For fans of 1970s American television, Ernie Barnes’s (1938–2009) painting The Sugar Shack is likely familiar. The 1976 work depicting a dance scene—which was the cover art for Marvin Gaye’s album “I Want You”—achieved cult status by regularly appearing on the hit sitcom “Good Times,” inspiring a community of television viewers who discussed it after each episode.

Known for his unique “neo-mannerist” approach of presenting figures through elongated forms, he captured his observations of life growing up in North Carolina, playing professional football in the NFL (1960–1964), and living in Los Angeles. Ernie Barnes: A Retrospective includes examples of his paintings of entertainment and music, and also highlights how Barnes, the official artist of the 1984 Summer Olympic Games in Los Angeles, extensively represented athletes and sports.

“While not widely known within the mainstream art world, Barnes is revered by a diverse group of collectors and admirers across the country,” said guest curator Bridget R. Cooks, associate professor of African American Studies and Art History at the University of California, Irvine. Ernie Barnes: A Retrospective is curated by Cooks with assistance from Vida L Brown, visual arts curator and program manager. The Pasadena Museum of California Art originated the exhibition.

Ernie Barnes was born July 15, 1938 in Durham, North Carolina during the height of the Jim Crow Era. He lived in a section of the city called “The Bottom” with his parents and younger brother, James. His father, Ernest Barnes, Sr. was a shipping clerk for Liggett & Myers Tobacco Company. His mother, Fannie Geer, supervised the household for a prominent attorney who shared his extensive art book collection with the young “June” Barnes.

Bullied as a child for being shy and sensitive, Barnes found solace in drawing. In his freshman year, a weightlifting coach put Barnes on a fitness program, which taught him effort and discipline. By his senior year at segregated Hillside High School in Durham, Barnes was captain of the football team and state champion in the shot put. He earned a full athletic scholarship to North Carolina College (now North Carolina Central University) where his art instructor, sculptor Ed Wilson, encouraged him to create images from his own life experiences.

In 1960, Barnes was one of thirty African Americans drafted into the National Football League, one of nine players selected that year from a Historically Black College and University. For five seasons, Barnes was an offensive lineman for the New York Titans, San Diego Chargers, and Denver Broncos. In 1965, New York Jets owner Sonny Werblin paid Barnes a season’s salary “to paint” and subsequently sponsored the first Ernie Barnes gallery exhibition. After the success of the show, Barnes retired from football at age twenty-eight and settled in Los Angeles to devote himself to art.

From his sports experience and the study of anatomy, Barnes’ unique style of elongation captures the movement, energy, and grace of his subjects. This earned him numerous awards, including “Sports Artist of the 1984 Olympic Games” and “2004 America’s Best Painter of Sports” from the American Sport Art Museum & Archives. He was commissioned to paint artwork for the National Basketball Association, Los Angeles Lakers, Carolina Panthers, New Orleans Saints, Oakland Raiders, educational institutions, corporations, musicians, celebrities, and professional athletes. His beloved painting, “The Bench,” which Barnes created in 1959 before his rookie season, was presented in 2014 to the Pro Football Hall of Fame.

His pride of North Carolina is evident in his artwork of pool halls, barbershops, porch ladies, church, street singers, sandlot games, and other memories of growing up in the South. His commentary on dance, music, sports, women, education, social justice, and everyday life continue to inspire viewers of all ages, races, religions, educational levels, and social statuses.

Tour Ernie Barnes: A Retrospective with guest curator, Bridget R. Cooks, associate professor, Departments of African American Studies and Department of Art History at the University of California, Irvine. Cooks will offer an in-depth look at the exhibition, which features paintings, drawings, and ephemera from Barnes’s life.

Get ready for a Marvin Gaye–themed karaoke night celebrating the life and work of the late Ernie Barnes, led by soul singer, Torrénce Brannon-reese! This night of song is presented in conjunction with Ernie Barnes: A Retrospective,which includes Barnes’s famous painting The Sugar Shack, which was featured on the cover of Gaye’s “I Want You” album.

Admission to the California African American Museum is free. Visit caammuseum.org for current exhibition and program information or call 213-744-7432 for tours or additional assistance.

Hours: Tuesday–Saturday 10 a.m.–5 p.m., Sunday 11 a.m.–5 p.m. Closed Mondays and national holidays. The California African American Museum is located in Exposition Park at the corner of Figueroa Street and Exposition Boulevard, west of the 110 (Harbor) Freeway. Easy parking is available for $12 (cash only) at 39thand Figueroa Streets. The Metro Expo line stop Expo Park/USC is a five-minute walk through the Exposition Park Rose Garden to the Museum.