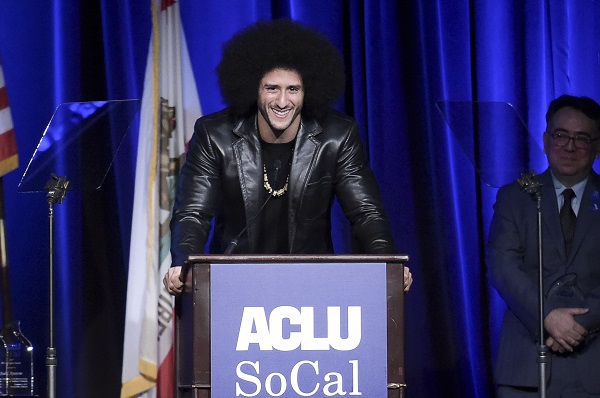 The ACLU, an organization that fights to preserve equal rights for all people in America, awarded Kaepernick with the Eason Monroe Courageous Courage Award, according to the Hollywood Reporter.

“We must confront systemic oppression as a doctor would a disease,” Kaepernick said in his acceptance speech, World Star Hip Hop reports. “You identify it, you call it out, you treat it, and you defeat it.”

At the beginning of the 2016-17 season, Kaepernick, the then signal caller for the San Francisco 49ers, decided to display his grievance for police brutality and racial discrimination by taking a knee when the national anthem.

The protest was celebrated as well as demonized. His jersey sales skyrocketed, people either wore them with pride or burned them in disdain. Kaepernick used his jersey proceeds to help organizations who tackled the causes similar to his beliefs. He is still loyal to his promise of donating $1 million to organizations that correct social injustices, including 100 Suits For 100 Men, the Lower East Side Girls Club and The Dreamville Foundation.

Kaepernick sparked a movement that reached a pitch in late September when President Trump made a divisive statement about the NFL protests. Players throughout the league began kneeling during the national anthem, linking arms, or staying in the locker room during the time the national anthem is played.

Although Kaepernick has received backlash for his stance, he has found support and accolades for risking his job to display a relevant issue in America.