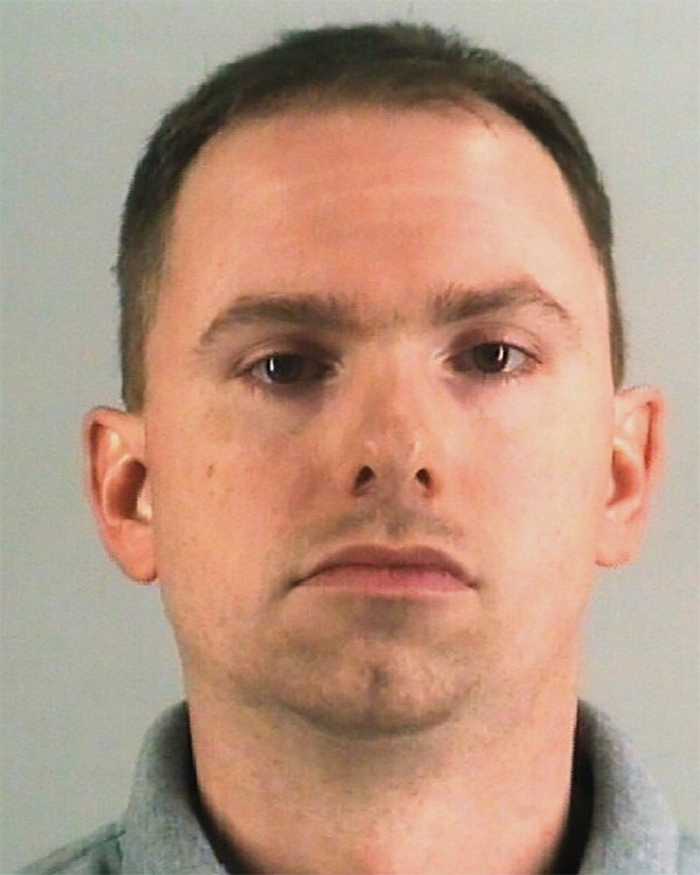 This undated photo provided by the Tarrant County Jail shows Aaron Dean. The Fort Worth police officer who shot and killed a black woman through a back window of her home while responding to a call about an open front door was charged with murder on Monday after resigning from the force. (Tarrant County Jail via AP)

A White Fort Worth police officer who shot and killed a Black woman through a back window of her home while responding to a call about an open front door was charged with murder on Monday after resigning from the force.

Aaron Dean, 34, was jailed Monday evening on $200,000 bond after the police chief said he acted without justification would have been fired if he hadn’t quit.

Police bodycam video showed Dean approaching the door of the home where Atatiana Jefferson, 28, was caring for her 8-year-old nephew early Saturday. He then walked around the side of the house, pushed through a gate into the fenced-off backyard and fired through the glass a split-second after shouting at Jefferson to show her hands.

Dean was not heard identifying himself as police on the video, and Interim Police Chief Ed Kraus said there was no sign Dean or the other officer who responded even knocked on the front door.

“Nobody looked at this video and said that there’s any doubt that this officer acted inappropriately,” Kraus said.

Earlier in the day, Jefferson’s family had demanded that Dean, a member of the force for 1½ years, be fired and arrested.

“Why this man is not in handcuffs is a source of continued agitation for this family and for this community,” family attorney Lee Merritt said, hours before Dean was booked into jail.

Police went to Jefferson’s home about 2:25 a.m. after a neighbor called a non-emergency line to report a door ajar. In a statement over the weekend, the department said officers saw someone near a window inside the home and that one of them drew his gun and fired after “perceiving a threat.” 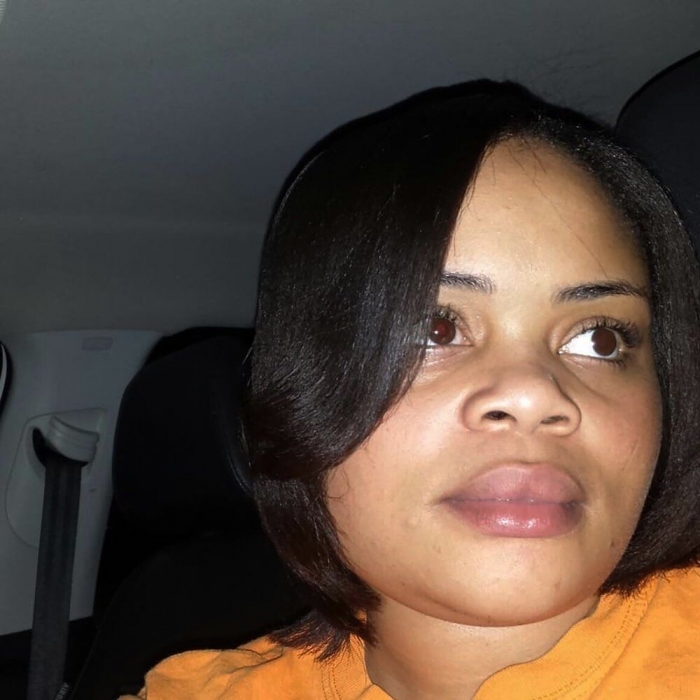 This undated photo provided by Jefferson’s family shows Atatiana Jefferson. A White Fort Worth police officer shot and killed Jefferson through a back window of her home while responding to a call about an open front door acted without justification and resigned Monday, Oct. 14, 2019, before he could be fired, the police chief said. (Jefferson’s family via AP)

The video showed Dean shouting, “Put your hands up! Show me your hands!” and immediately firing.

Jefferson was staying up late, playing video games with her nephew, when she was killed, according to the family’s attorney.

As for what, exactly, led Dean to open fire, the police chief said: “I cannot make sense of why she had to lose her life.” The chief said Dean resigned without talking to internal affairs investigators.

The video included images of a gun inside a bedroom. Kraus said he did not know whether Jefferson was holding the weapon. But he said the mere fact she had a gun shouldn’t be considered unusual in Texas.

“We’re homeowners in Texas,” the police chief said. “Most of us, if we thought we had somebody outside our house that shouldn’t be and we had access to a firearm, we would be acting very similarly to how she was acting.” Kraus said that, in hindsight, releasing the images of the weapon was “a bad thing to do.” 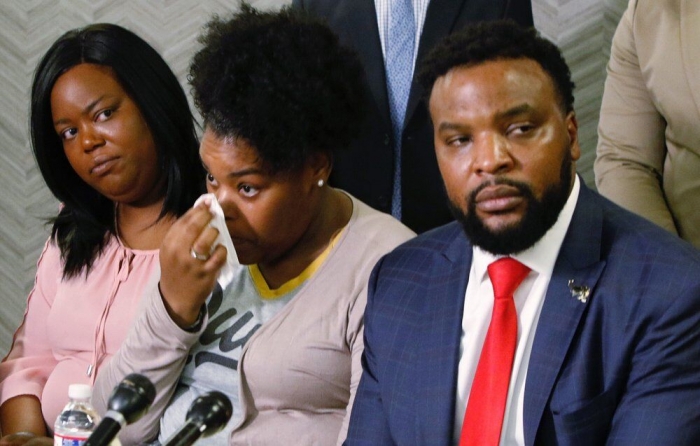 Amber Carr, center, wipes a tear as her sister, Ashley Carr, left, and attorney Lee Merritt, right, listen to their brother Adarius Carr talk about their sister, Atatiana Jefferson during a news conference Monday, Oct. 14, 2019 in downtown Dallas. The family of the 28-year-old black woman who was shot and killed by a white police officer in her Fort Worth home as she played video games with her 8-year-old nephew expressed outrage that the officer has not been arrested or fired. (Irwin Thompson/The Dallas Morning News via AP)

“Atatiana was in her own home, caring for her 8-year-old nephew. She was a victim,” Price said.

Texas has had a “castle doctrine” law on the books since 2007 that gives people a stronger legal defense to use deadly force in their homes. The law was backed at the time by the National Rifle Association and is similar to “stand your ground” measures across the U.S. that say a person has no duty to retreat from an intruder.

Fort Worth is about 30 miles (50 kilometers) west of Dallas, where another high-profile police shooting occurred last year.

In that case, white Dallas officer Amber Guyger shot and killed her black neighbor Botham Jean inside his own apartment after Guyger said she mistook his place for her own. Guyger, 31, was sentenced this month to 10 years in prison.

A large crowd gathered outside Jefferson’s home Sunday night for a vigil after demonstrations briefly stopped traffic on Interstate 35. A single bullet hole was visible in the window of the single-story, freshly painted purple home, and floral tributes and stuffed animals piled up in the street.

The police chief said Dean could face state charges and that he had submitted a case to the FBI to review for possible federal civil rights charges. 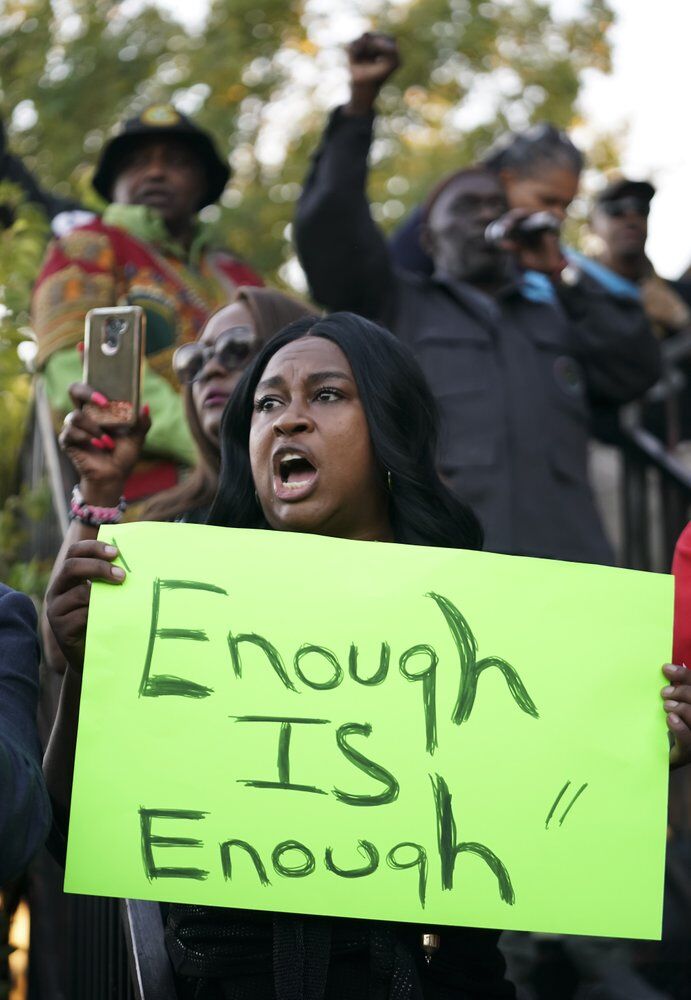 Carol Harrison-Lafayette protests the police shooting of Atatiana Jefferson during a community vigil for Jefferson on Sunday, Oct. 13, 2019, in Fort Worth, Texas. A white police officer who killed the Black woman inside her Texas home while responding to a neighbor’s call about an open front door “didn’t have time to perceive a threat” before he opened fire, an attorney for Jefferson’s family said. (Smiley N. Pool/The Dallas Morning News via AP)

Dean has not yet hired an attorney but will have one provided with financial support from the state’s largest police union, the Combined Law Enforcement Associations of Texas, according to Charley Wilkison, executive director.

Relations with the public have been strained after other recent Fort Worth police shootings. In June, the department released footage of officers killing a man who ignored repeated orders to drop his handgun. He was the fourth person Fort Worth police had fired upon in 10 days.

Of the nine officer-involved shootings so far this year in Fort Worth, five targeted African Americans and six resulted in death, according to department data.

Calling the shooting “a pivotal moment in our city,” the mayor said she was ordering a top-to-bottom review of the police force and vowed to “rebuild a sense of trust within the city and with our police department.”

Jefferson was a 2014 graduate of Xavier University in New Orleans and earned a bachelor’s degree in biology. She was working in pharmaceutical equipment sales and was considering going to medical school, according to the family’s lawyer.