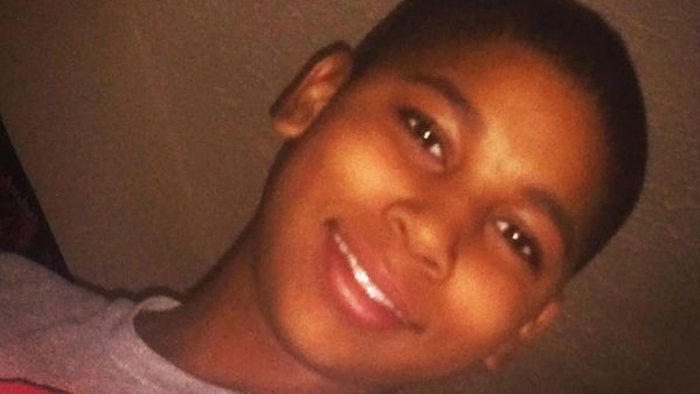 12-year-old son, Tamir Rice, was shot to death by police in Cleveland. (AP)

Walk in the front door of 6117 St. Clair Avenue today, and you’ll see an empty space with a patterned linoleum floor and nicked paneling that covers nearly every wall of the two-story brick building.

The mother of Tamir Rice envisions a warm and energetic space filled with children. They are painting and drawing with pastels. They are beating on African drums and bowing violins. They are performing plays they created in an intimate theater.

The children inside what will become The Tamir Rice Afrocentric Cultural Center will be mentored and nurtured and taught how to dissect and participate in political systems, something Rice said she never learned in school but was forced to learn 3 1/2 years ago to speak up for 12-year-old Tamir after he was shot and killed by a Cleveland police officer in the recreation center park where he played daily.

For Rice, the center is a gift to Tamir. It’s solid assurance that while he never grew to be a man, his legacy will not fade.

Rice said some people have discouraged her from opening the center, or questioned her ability to pull it off.

The 41-year-old mother may have only an 8th grade education, but she brushes off those naysayers just like she did the annoyance last week of someone putting superglue in every one of the locks on the center’s newly purchased building.

“I don’t pay no attention to them,” Rice said bluntly. “They can’t beat me for the simple fact that their child wasn’t killed by the state. I’m going to do it through the grace of God and I’m going to do it because the city of Cleveland gave me no choice but to do it as far as building my son’s legacy and keeping his legacy alive.”

What some might not understand is that being hands-on with the work of the foundation and the center is an important part of Rice’s grieving and healing process, Amanda King, an activist artist, who consults for the foundation said.

King is the founder of Shooting Without Bullets, which uses photography and performance to allow black and brown teens to process and express their feelings about complex social problems and injustices they experience.

In terms of education and credentials, Rice might not fit the normal mold of an executive director running a foundation, King said. It’s also hard for her to trust others with something as deeply personal as honoring her son.

“It’s wakening a creative energy in her,” King said. “It really is a new life and a new career.” 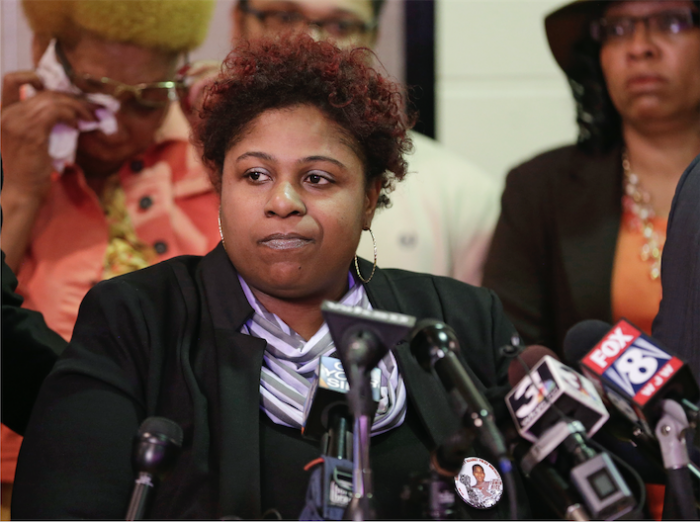 In this March 3, 2015, file photo, Samaria Rice, the mother of Tamir Rice, a boy fatally shot by a Cleveland police officer, talks about the family’s lawsuit against the city in Cleveland. The city of Cleveland has reached a settlement Monday, April 25, 2016, in a lawsuit over the death of Rice. (AP Photo/Tony Dejak, File)

Next month, Rice is throwing a “Sweet Sixteen” party for the milestone her son can’t celebrate. She’s invited the public to help her honor Tamir with musical and spoken word performances, and to help raise $21,000 to renovate the more than 3,500-square-foot building purchased in March by the Tamir Rice Foundation.

Built in 1920, the building has good bones but needs some new windows, drywall and a stage for performances. She hopes to complete work and open the center in 2019.

Tickets for June 14 fundraiser at the Cleveland Museum of Art are $55 and contributions to the renovation are also being collected online.

Rice hesitated initially before deciding to put the center in Cleveland, she said. But her son was born and raised here, and she wanted “to make sure that Cleveland doesn’t try to erase the memory.”

“Nobody is talking about Tamir any more in Cleveland,” she said. “And that’s sad.” Not council people. Not church pastors.

Some artists have kept what happened to him alive, like Terrence Spivey, a theatrical director, who in 2016 helped create a play that wove together searing monologues that grappled with the community’s response to Tamir’s death. Spivey will be the artistic director for the center’s drama program, Rice said.

Rice created the foundation that bears her son’s name in 2016. Later that year, a judge approved a $6 million settlement of the wrongful death lawsuit she’d filed against the city and the two officers involved. It was the largest settlement the city had ever paid related to a police shooting.

After lawyer’s fees and costs and payments to other relatives, Tamir’s estate was left with about $1.8 million.

That money didn’t bring back her son, nor did it temper Rice’s anger with the justice system or the city itself, which she feels never appropriately atoned for Tamir’s death.

The foundation provided a way to channel that frustration into something positive, something with a lasting purpose. Rice said she wants to invest in Cleveland’s children.

More Nurturing To Do

Rice’s own childhood was fraught with trauma. Her mother, Darlett, went to prison after shooting and killing her abusive boyfriend when Rice was 12.

Rice taught herself, with the help of counselors and programs, to provide the structure for her children she never had. Rice sought out and enrolled them in arts programs and sports, and made sure their needs at school were addressed. Tamir, she said, loved to create, drawing cartoons and making pottery.

At first, Rice said she was interested in forming a school, but that had its own hurdles.

In her mind, she kept coming back to what mattered most to her as a mother.

“I’m a nurturer and I still had some nurturing to do for Tamir but I was robbed of that…I want to see some positivity. I don’t really see a whole lot of positivity coming out of the inner city when it comes to the youth that is suffering…I want the center to give them a sense of hope.”

The mentoring component was especially important to Rice. Tamir and his older sister, Tajai, had mentors through a program with Ohio Guidestone, and Rice recalled how those few hours a week made a difference.

“That kind of helped Tamir with emotional and coping skills and social skills, which a lot of children lack in the inner city,” she said.

Rice’s plan crystalized one day this year as she drove down St. Clair Avenue. She spotted a narrow building between the Empress Taytu Ethiopian restaurant and an indoor flea market. The building had a for rent sign and Rice decided see if the owner would sell.

In March, the foundation purchased the building for $162,680. For decades, the space was home to the Ameriska Dominova, a Slovenian newspaper dating back to 1899, and printed in the building from 1929 until 2008.

Katherine and Edward Turk bought the building in 2010, mainly to preserve its historical contents, which now are in a small museum down the street. Most recently, a band practiced and performed in the space where Rice said she’ll build a small theater.

Edward Turk said he’d had other offers for the building in the past but he turned them down. It was waiting for its next purpose, he said.

“I feel good about it,” he said. “I feel good for anyone who wants to be in there to help others.”

While Rice aims to create a hub for artistic expression, and a safe space for all children, she also wants to learn to “dissect the system” for change. To know what it takes to be a councilperson, a mayor, a representative. And also to learn the chain of command and who has the power to make change in a city.

“Those children that’s coming out of the 12th grade, they’re not talking about it, let’s be honest, like they are in the white schools,” she said. “When it does happen, it isn’t enough. You’ve got some kids out there that want to see some change, they just don’t know how to go about it.”

That’s what she wants to teach them.

“I gotta do something, you know,” she said. They ain’t gonna hear me out…I ain’t got time for that. That’s why I’ve got to channel my stuff to the youth because they’re going to be our future. I may not see it in my lifetime, but the center will make sure it gets done, that’s for sure.”