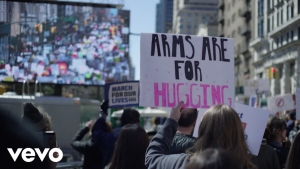 We shot ‘What’s Going On' in Detroit and Flint Michigan, we wanted a place that resonates with the song and the history of Motown, while also remaining relevant to the sociopolitical issues in the music video. The music video took four days to shoot, but I traveled to Michigan a couple weeks early to find the right people. It was very important for us to find real people that resonated with the stories, rather than casting actors. We wanted the history of the song and the communities we filmed in to come through in our video. For example, Steve Smith, who plays the blind man in our music video, actually worked for Motown when ‘What’s Going On’ was originally recorded. ... read more / watch video »
ADVERTISEMENT
ADVERTISEMENT
Videos
Kirk Franklin Interview PT3