Gunshots rang out in the hallway near the chambers, and windows were shattered throughout the building. An unidentified woman inside reportedly was shot in the neck. Her condition is currently unclear. The National Guard joined the Secret Service, FBI, Capitol Police, and D.C.’s Metropolitan Police at the scene. ... read more »
Black News Channel In ‘The Red Zone’ Ready for Launch 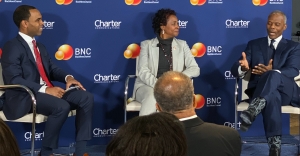