Mitchell was killed on Dec. 9th, 2018, during an officer-involved shooting in a Torrance when officers responded to a call about a stolen vehicle.  Authorities said he was armed with a rifle and in a stolen vehicle. Police later clarified the alleged rifle was a toy air rifle. The family feels the police already had in their minds they wanted to shoot Mitchell because within fifteen seconds of making contact with him, they were already shooting. When viewing the video you can see  Mitchell had his hands up, complying with the officers. ... read more »
Confronting Jackie Lacey: The Mamas of Those Slain by Police Demand Justice during Black History Month 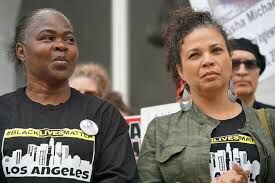 Jackie Lacey this past Sunday, February 17 for their 35th Annual Black History Month program. The same DA Lacey who has been charged with prosecuting crimes in the County of Los Angeles since January 2012, over which time more than 450 killings of community members by police have occurred and only one prosecution of an officer has been filed.[1]  It is imperative that we remember that each of these 450 “cases” are real people: sons, daughters, mothers, fathers, sisters, brothers and community members. When people are murdered by police, it leaves unimaginable pain for the hearts of their loved ones…especially their mothers. On Sunday evening, a cadre of five mothers, family members and supporters refused to allow Lacey to smile, wave, invoke God, and dishonor the Spirits of their slain children. They confronted her in, what may be, the most appropriate of all places, church. ... read more »
ADVERTISEMENT
ADVERTISEMENT
Videos
WATCH: THE HISTORY OF THE HARLEM RENAISSANCE