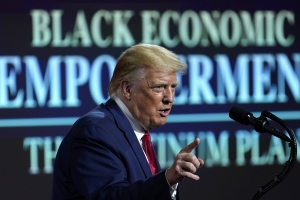 In an attempt to win Black voters that have been elusive for the Republican Party for many cycles, President Donald Trump announced a "Platinum Plan," of Black Economic Empowerment. Trump unveiled the plan during an Atlanta rally with less than six weeks left until Election Day on November 3rd. Currently, President Barack Obama’s former Vice President Joe Biden in leading in the polls in many key states in the presidential contest.  ... read more »
ADVERTISEMENT
ADVERTISEMENT
Videos
June 17 2017: Nipsey opens Hussle “Smart Store” , Marathon-Watch Powerful Message from the Legend