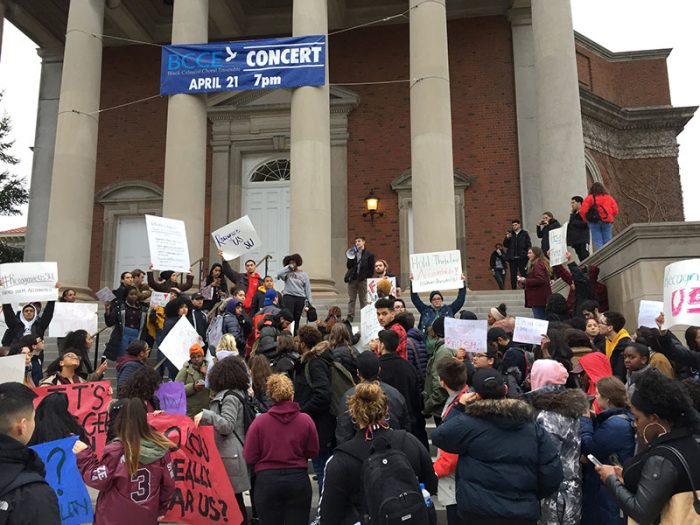 Syracuse University students gather outside Hendricks Chapel on Wednesday, April 18, 2018 to protest a video made by members of a now-suspended fraternity showing racist and sexist behavior in Syracuse, N.Y. The school’s chancellor, Ken Syverud, described the video involving members of Theta Tau, a professional engineering fraternity, as racist, anti-Semitic, homophobic, sexist and hostile to people with disabilities. He said the videos were turned over to the school’s Department of Public Safety for possible disciplinary or legal action. (Lindsey Sabado/The Syracuse Newspapers via AP)

Syracuse University announced Saturday that it has permanently expelled a fraternity over an offensive video that fraternity members say was intended as satire.

He said disciplinary actions against the individual students involved could include suspension or expulsion.

The video showed a group of men laughing uproariously at performances punctuated by racist language against blacks, Jews and Hispanics and simulated sex acts. Some students contend the video illustrates larger issues of racism and sexism at the university.

The Syracuse chapter of Theta Tau, a national engineering fraternity, apologized for the video Friday and says its members believe racism “has no place on a university campus.”

“Each semester our new members are given the opportunity to write and act out a skit, in order to roast the active brothers. This event was never intended to be centered around racism or hate. This year, one of these brothers is a conservative Republican, and the new members roasted him by playing the part of a racist conservative character,” the New York school’s Theta Tau chapter said on its website .

“It was a satirical sketch of an uneducated, racist, homophobic, misogynist, sexist, ableist and intolerant person,” the statement said. “The young man playing the part of this character nor the young man being roasted do not hold any of the horrible views espoused as a part of that sketch.”

The fraternity did not immediately respond to an email seeking comment on the chapter’s expulsion Saturday.

Syverud said that in addition to expelling the Theta Tau chapter, university official “have begun a top-to-bottom review of our entire Greek system.”