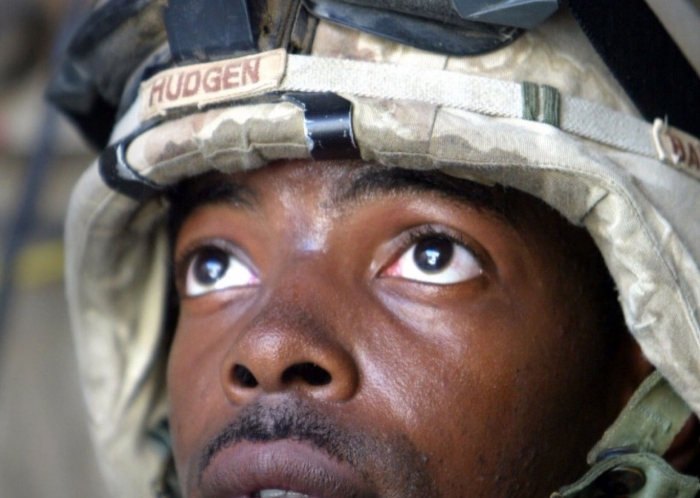 Encourage yourself and one another. NEVER GIVE UP! Things are not as they sometimes appear. Personal experience has taught me. Stay in the game. Obstacles, which appear to be insurmountable with persistence can be overcome. It says, “appear to be insurmountable. The way becomes brighter as you continue to move through the continuum. Concentrate. Focus.  All the time building up your resistance. Establish a mindset of faith..no wavering or doubt. Stay the course. Do not allow yourself to be derailed from your passion nor your dream. Do not devalue your ideas or yourself. You’re worthy. Giving up is wiped from your vocabulary. Giving up is not for you, a conqueror. Conquerors have vision and hope. The photo is an American soldier keeping an eye out for enemy fighters on rooftops during an operation August 15, 2004 in Najaf, Iraq. In 1946, U.S. Army Sergeant Isaac Woodard challenged a Greyhound bus driver while traveling from Georgia to South Carolina after being discharged from service in World War II.  Police officers met him at the next stop, brutally attacked him, leaving him permanently blind. The attack and other problematic stories led to national pressures on racial segregation and discrimination and to the integration of the armed services in 1948. Isaac Woodard was born in Fairfield, South Carolina…grew up in Goldsboro, North Carolina…enlisted in the U.S. Army on October 14, 1942, at Fort Jackson in Columbia, South Carolina, and served in the Pacific Theater as a longshoreman in a labor battalion. In February 1946, the decorated soldier received an honorable discharge at Camp Gordon, located near Augusta, Georgia.  Along with a contingent of other discharged soldiers–black and white–Woodard boarded a Greyhound bus on February 12 to travel home.  The bus driver belittled the army veteran for asking to take a bathroom break.  At the next stop, Woodard was met by the Chief Linwood Shull of the Batesburg, South Carolina police. While still in his army uniform, the police forcibly removed the sergeant from the bus and arrested him for disorderly conduct. They repeatedly beat Woodward. The next day he was convicted of drunken and disorderly conduct and fined fifty dollars. It took several days for the police to take him to the hospital. The beatings that he suffered while in police custody caused him permanent blindness. The National Association for the Advancement of Colored People (NAACP) took Woodard’s case in the spring of 1946, pressing military officials to provide assistance to the gravely injured veteran, while also calling for legal action against Chief Shull.  By September, NAACP officials met with President Harry Truman who expressed outrage over the assault on a veteran.  Shull was tried in federal court for beating Sgt. Woodward, but acquitted. The jury took thirty minutes to acquit him.  President Harry Truman heard about it in the news media…created the first President’s Committee on Civil Rights (PCCR) which published  To Secure These Rights in 1947.  This groundbreaking report led to the desegregation of the military in 1948.  For many Americans, Isaac Woodard became a sympathetic figure representing the larger conflicts of Jim Crow emerging after World War II.  The public response to the vicious attack on Woodard signaled a major shift in public support for civil rights during the 1940s. These atrocious historical events cannot be overlooked. It’s hard. Martin Luther King said, “We shall overcome.” I think we should change and give the saying a lift, “we have already overcome.” That puts it into a Spiritual prophetical holding a inviolable perspective…knowing that in the Spirit we have already overcome and we stand in that posture of champions and never underdogs or victims. Isaac Woodard died in the Bronx, New York on September 23, 1992.  He was 73. (blackpast.org) Joe Raedle/Getty Images Teach the children. Thanks for reading! Jeanette Grattan Parker, Ph.D., Superintendent Today’s Fresh Start Charter School www.todaysfreshstart.org   All rights reserved copyright: Will You Marry Me; Inquiring Minds Want to Know.  www.Askdrjeanetteparker.com tm; email: askdrjeanette.successontheway@gmail.com askdrjeanette tm

ASK DR. JEANETTE, SUCCESS ON THE WAY: “The Pre-Emminence and Exaltation o...

“The Pre-Emminence and Exaltation of Self-Will” Part 1 MaMa! MaMa! Wher...

SUCCESS ON THE WAY, ASK DR. JEANETTE: “The Exaltation of Self-Will!” Pa...

“The Employment Famine” “The Enemy Has Our Number and Knows Where We ...

SUCCESS ON THE WAY, ASK DR. JEANETTE: Brown vs. Board of Education**It’s ...